The Jolly Roger Content from the guide to life, the universe and everything 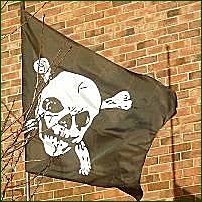 Every normal man must be tempted, at times, to spit on his hands, hoist the black flag, and begin slitting throats.
- Henry Louis Mencken (1880 - 1956)

The 'Jolly Roger' is used to refer to the archetypical white-on-black skull-and-crossbones flag. In a stricter sense it should be associated only with pirate activity in the Atlantic, more specifically the Caribbean from the 16th to the 18th Centuries. On the other hand, this symbol has become an icon, widely used nowadays by computer hackers, fighter pilots, heavy-metal bands and other folks with bad-ass attitudes. The skull-and-crossbones motif is furthermore seen in warning signs symbolizing life-threatening danger. But that's not the 'Jolly Roger' of this entry. The origins of the name and the usage of the flag are best explained by going into some historical considerations about pirates and their environment.

Around 1500, the Pope decided to divide the recently 'discovered' New World into two parts. One part was for the Spanish and the smaller one belonged to Portugal, period. In the beginning, non-Catholic states such as England, France and the Netherlands didn't care too much about this, because the New World didn't seem to have much riches. However, the Spanish soon found some gold-laden heretics to extort, and the Portuguese ended up finding spices, furs and wood (which added to their prospering business selling slaves from Africa). Eventually France, England and the Netherlands decided (everyone on their own, of course) that this all was unjust, and that they also wanted a slice of the pie. After all, who does this Pope-guy think he is anyway?

The three countries would not want to risk a war in Europe, because Spain was too strong at that time (Portugal was militarily insignificant, but good pals with Spain). So how did they get around the problem? The answer is obvious: by sponsoring piracy and by secretly hiring sea mercenaries, who would do the usual pirate stuff. Officially they told Spain the sad, sad story about being powerless, but if these guys showed up they'd punish them. Pirates, therefore, did not sail under a specific country's flag, at least not while engaged in pirate activities. Later on, as Spanish power diminished, pirates would often use both flags, one for the country they were hired by, and the pirate flag to symbolise that they were on an 'official' privateering mission.

In the late 1500s, French pirates (buccaneers) kept two battle flags on deck, one plain red and one plain black. Before a battle, the pirate ship would hoist one or the other to signal to the victim whether 'quarter' (black flag) or 'no quarter' (red flag) was being given. 'No quarter' meant no prisoners would be taken (complete slaughter), whereas 'quarter' meant that the pirate ship was willing to take prisoners (eventually releasing them for a ransom). The red flag was called Jolie Rouge which is French for 'pretty red'.

With time, England became dominant in the piracy business. The name of the pirate flag remained Jolie Rouge but the usage of the red and black flags eventually got confused. In the end, each pirate was using his own design of flag, which was usually black with some white symbols on it, one of which was the skull-and-crossbones, and the flag was called the 'Jolly Roger'. How this Jolie Rouge evolved to become 'Jolly Roger' remains obscure, but there are some suggestions.

The most plausible is that the word jolie mutated somewhat automatically into 'jolly' on going from French to English. 'Old Roger' was a slang term for the devil at that time, rouge could have easily changed into 'rogue' and from that to 'roger'. There is the less plausible story about one pirate that was given the title 'Ali Rajah' which then transformed into 'Roger'.

As mentioned above the usage of flags got confused, some pirates still adhered to the old black and red convention, some used it the other way round and some used different national flags to confuse the victim. Every pirate had his own design of flag, usually black with white intimidating motifs on it: skulls or skeletons (symbolizing death), swords and cannons (with an obvious meaning), treasure chests (same here), hearts (often pierced, to symbolize 'ruthlessness'), hourglasses (meaning: 'your time is over') and sometimes the pirates themselves. The classic 'skull-and-crossbones' was one among these designs. In the following a selection of designs used by some pirates will be described: