'The Pirates of Penzance' - the Comic Opera Content from the guide to life, the universe and everything 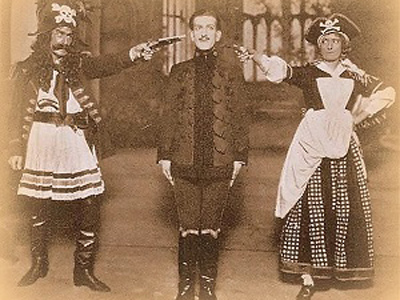 The Pirates of Penzance, or the Slave of Duty, premiered on 31 December, 1879, in New York, opening three months later at the Opera Comique in London. This was Gilbert and Sullivan's fifth opera together, and followed the huge success of HMS Pinafore. The multiple openings were an attempt by the duo to protect their copyright: The D'Oyly Carte Company were in New York performing Pinafore after a number of unauthorised versions had sprung up. At the same time they were rehearsing to open Pirates, but in order to maintain their English copyright, a special performance was held in Paignton, Devon.

The opera satirises the upper classes of the time. In Major General Stanley, Gilbert parodies the newly-rich aristocracy, while in the behaviour of the Pirates, he mocks the idea that nobility comes with birth. The pirates are noblemen who are a disgrace to their class, while Frederic, a lower class apprentice, behaves with far more propriety and nobility. In the finale, Gilbert and Sullivan poke fun at the idea that the nobility will be humbled by the mention of the monarch, and at Major-General Stanley's decision to pardon them on the basis of their birth. The Pirates of Penzance was well received by the critics, most of whom felt it to be a marked improvement over Pinafore, both in terms of Gilbert's writing and Sullivan's music.

The action of The Pirates of Penzance spans a period of a few days in which the eponymous pirates are ashore. There are five major characters:

The first act opens in the Pirates' lair, a cove on the Cornish Coast. Frederic is about to turn 21 and complete his apprenticeship with the pirates. Frederic explains the quandary he is in at this point: he is fond of the pirates individually, and knows that they are too tender-hearted towards their foes, particularly if they happen to be orphans (which the pirates are themselves). However, he despises their profession and feels that once he is no longer legally bound to them it will be his duty to denounce them to the authorities. It is also revealed that Frederic became a pirate through an error; Ruth, once his nursery maid and now a pirate maid, now confesses that Frederic's father wanted the boy to become a pilot, but she misheard and thought the boy was to be apprenticed to a pirate. Her shame at this was so great that she decided that she would join her charge with the pirates.

As midnight strikes, Frederic prepares to leave the pirates forever, and it is suggested that he takes Ruth with him. As Frederic has seen no other woman since he was eight, and therefore believes he might love Ruth, he agrees. Ruth is desperate to stay with Frederic, and lies to him to convince him that she is beautiful in an attempt to keep him with her. This is overthrown after the departure of the pirates, as a group of lovely young women approaches their cove. Frederic reveals his presence to them, partly to warn them of the pirates, but also to ask if any of them could love him. Only one responds, and for Mabel and Frederic it is love at first sight. Unfortunately the pirates spring out and capture the group, preparing to marry all the girls by force. The girls protest, saying that their father is a Major General, at which point he does indeed arrive. In an attempt to prevent this catastrophe the Major General tells the pirates he is an orphan and that the girls are his only comfort. Therefore the pirates, in accordance with their policy of never molesting an orphan, release them.

At the start of the second act, Major General Stanley is sitting in the chapel of his newly-purchased estate, bemoaning his lie to the Pirates. Frederic tries to assure him that it was the only way he could have saved his daughters. The former pirate apprentice prepares to lead a raid on the pirates, accompanied by a very reluctant group of policemen. While Frederic is alone he is interrupted by Ruth and the Pirate King, who reveal a 'most peculiar paradox' to him. It seems that Frederic was apprenticed to the pirates until his 21st birthday, but he was born on the 29 February in a leap year, and so he is technically still only five and a quarter. On hearing this, Frederic accepts it as his duty to return to the pirates, and therefore reluctantly tells them that Major General Stanley is no orphan.

The majority of critics believed that Sullivan's music for The Pirates of Penzance was superior to his score for HMS Pinafore. The only serious complaint was that Pirates did not have so many immediately catchy tunes. This last was not a view Sullivan shared. Before the production opened he wrote to his mother describing his new work, saying:

The libretto is ingenious, clever, wonderfully funny in parts, and sometimes brilliant in dialogue, beautifully written for music, as is all Gilbert does, and all the action and business perfect. The music is infinitely superior in every way to Pinafore; 'tunier' and more developed, of a higher class altogether. I think in time it will be more popular.

The undisputed classic song of The Pirates of Penzance is Major General Stanley's introductory solo, 'I Am the Very Model of a Modern Major-General'. Sullivan scored the accompaniment to fit perfectly with Gilbert's tongue-twisting lyrics. The song is taken at breakneck speed, only pulling up at the end of each verse in order for the chorus to join in. Gilbert deliberately refers back to HMS Pinafore in this song as the Major General sings:

Then I can hum a fugue of which I've heard the music's din afore,
And whistle all the airs from that infernal nonsense Pinafore.

There are four verses in the Major General's song, and the singer invariably ends up out of breath but always with a moment of triumph. The song has been parodied many times, including at the Last Night of the Proms 2000 when in honour of it being the centenary year of Sullivan's death, the conductor, Sir Andrew Davies, sang his valedictory speech to the classic tune.

Other favourite tunes from Pirates include the Pirate King's solo, in which he glorifies his social role, despite his later statement: 'I don't think much of our profession, but contrasted with respectability, it is comparatively honest'. Later on in the first act, Mabel's song 'Poor Wandering One' is a feat for any singer, besides being a parody of an aria from a grand opera. The actress playing Mabel is forced to warble on an extremely high note for a long time, before being allowed to slide down the scale.

The Stanley girls' song 'Climbing over Rocky Mountain' was taken almost completely from Thespis, Gilbert and Sullivan's first opera, for which there was at that time no published libretto. Sullivan said after the premiere that when he had been writing the song 'A Policeman's Lot is Not a Happy One', he was often reminded of a choir for which he had been organist when he was 20. This choir had very few tenors and basses when he joined them, and so he augmented their numbers with a dozen or so local policemen. It may also have been the case that the choir inspired Sullivan's music; throughout the opera, it continually evokes the setting of the piece. This is particularly noticeable in the second act: the gothic atmosphere of Tremorden Castle, Major General Stanley's home; the love of Frederic and Mabel; the timidity of the constabulary; and the self-imagined stealth of the Pirates themselves.

The Pirates of Penzance was barely completed in time for the New York Opening. Indeed, at the very first performance in Paignton, the actors were so under-prepared that they had to carry their scripts onto the stage, while the policemen were dressed in sailor costumes. When Gilbert and Sullivan had arrived in New York to join up with the D'Oyly Carte Company who were performing HMS Pinafore, they had the opera only half-written. Then Sullivan discovered he had left all his sketches for the second act in London, and had to start over again. Unfortunately he also fell ill at the same time. After the dress rehearsal on 30 December, Sullivan sat down to re-write the overture, finishing at 5am, and rehearsing it with the orchestra 6 hours later.

Before the premiere of Pirates, Sullivan had problems with the New York orchestra. The musicians he was working with were members of a musical trade union, and thus received different fees depending on the engagement. Higher fees were charged for grand opera than for musical comedies. When it was announced that Sullivan would be conducting for the first night, the orchestra demanded fees on a scale for a grand opera. Sullivan managed to prevent severe ructions by refuting the idea that he had written a grand opera (although being flattered by the suggestion), and saying that he considered it a privilege to be given the opportunity to conduct such an orchestra. He also added that he did not wish to be the cause of dispute, and that he could always summon his own orchestra from England, although he hoped he wouldn't have to. At this point the orchestra decided that the honour of playing under Sir Arthur Sullivan was worth more than an increase in wages.

The Pirates of Penzance fulfilled Gilbert and Sullivan's ambitions to move on from their previous works. It also showed the continued popularity of their work, despite their move towards more serious ideas. The increasing success of the Gilbert and Sullivan partnership may have been one of the factors that led Richard D'Oyly Carte to build the Savoy Theatre for his company. Once the theatre opened it became the home of Gilbert and Sullivan's operas from then on.