The American Flag Content from the guide to life, the universe and everything 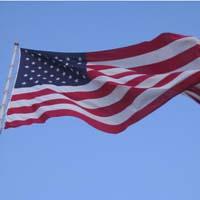 American Flags are everywhere in the United States. Not just in the usual, expected places, like government buildings, post offices and schools, no; American Flags are literally everywhere. It is quite possible that there are no other citizens on Earth quite as proud of their colours as Americans.

The Stars and Stripes can be seen flying in business parks, cemeteries, parks, on churches, shops and restaurants. But it doesn't end there. Flags can be seen on cars, clothes, jewellery, stickers, wallpaper, bedding, curtains, glassware, toys, shoes, foods and even postage stamps. Are there no limits to the uses of the American Flag?

Of course there are! Treatment and use of the flag is largely shaped by Congressional Acts and Presidential decree as outlined in the US Flag Code. The Flag Code outlines specific requirements for the display and use of the American Flag.

A Brief History of the Flag

The exact origins of the design of the flag are unknown, and likely to remain so. Records of plans made during the Revolution were not kept and since the flag was designed during the Revolution, no records of its origins exist. However, a few theories prevail and the truth is probably somewhere in between them.

According to William Canby's1 paper The History of the Flag of the United States, the design for the flag was brought to Betsy Ross by Colonel George Washington as part of a committee of the Continental Congress. Mrs Ross made suggestions on the design which were incorporated by Colonel Washington, and she was then commissioned to craft the first banner. Although meticulously researched (resulting in the establishment that there was no previous written history of the flag), Canby's paper confesses that it is largely documentation of a word-of-mouth account, and that traditional stories such as this can't always be depended upon to be statements of fact. Nonetheless, this is the most popular history of the origins of the flag. It is speculated that the design was based on the Washington family's Coat of Arms which also features stars and stripes, but no proof of this exists.

It is also possible that the flag was designed by Francis Hopkinson, a New Jersey Congressman, perhaps as a member of the committee of Congress that presented the design to Betsy Ross. It is probable that he designed many other ornaments and symbols for the new nation as well, including the Great Seal of the United States. Although his claim on the designs was never denied by his peers, neither was it ever officially acknowledged. He was also never recompensed for his contributions despite presenting to Congress several bills for the designs, which were invariably tied up in the Department of the Treasury before being dismissed.

The original design for the American Flag incorporated thirteen stripes alternated in red and white, and a union of thirteen white stars on a field of blue in the upper left-hand corner, stars and stripes alike representing the thirteen states. Although the design didn't call for a specific arrangement of the stars, it is likely they were in lines of three and two alternating, and this was probably the design of the first flag produced (although the familiar painting of Betsy Ross sewing the flag depicts a circle of 13 stars). Largely, the arrangement of the stars was left up to the manufacturer. This design was adopted in 1777.

The flag was modified as more states were admitted to the Union. The first modification added two stars and two stripes for Vermont and Kentucky, but it quickly became apparent that it wouldn't be practical to add new stripes for every new state. The next alteration came after five more states, adding five more stars but reverting to 13 stripes for the original 13 states. New states would see their stars added to the flag on the Independence Day following their admission to the Union.

The design of the flag was standardised in 1912 by President William Taft as being 13 red and white alternating stripes with six horizontal rows of eight five-point stars on a field of blue in the upper left corner, only one point of each star pointing up. This standard design was modified when Alaska was admitted to the Union in January of 1959, and again in August of 1959 with the admission of Hawaii, to allow for the additional stars. The current design of the American Flag has not changed since.

The flag was nicknamed 'Old Glory' by Captain William Driver, the captain of a whaling ship, in 1831. He received an American Flag as a gift before departing on a voyage, and when it caught the wind from the mast of his ship he declared it 'Old Glory'. It became his favourite flag and he kept it with him, taking it to his home in Nashville when he retired. During the Civil War several searches by Confederate soldiers failed to turn up the flag. When the Union captured Nashville in 1862, the flag was eventually revealed to have been hidden sewn into Driver's bed mattress. The original 'Old Glory' now resides in the Smithsonian.

Although Americans have many opportunities to celebrate their nation's history, such as Independence Day or Constitution Day, the flag has its very own day. Begun as a small, independent movement in 1885, Flag Day is now observed nationwide every 14 June, the anniversary of its adoption as the official Flag of the United States. Americans are encouraged to show their colours on this day and to participate in activities honouring the flag and its history.

The US Flag Code

The Flag Code was adopted on Flag Day, 1923. Prior to that date there were no laws or regulations for display and handling of the flag. The Code contains no penalties for violations, that's left up to the individual states, each of which has its own flag law. The Flag Code is contained in US Code Title 36, Chapter 10, which also covers conduct during the recitation of the Pledge of Allegiance and playing of the National Anthem, among other things.

Given the predominance of the flag in American culture, the Flag Code reveals some surprising facts.

It is the universal custom to display the flag only from sunrise to sunset. But of course, you will see flags across the nation 24 hours a day. By the code, this is acceptable to achieve a patriotic effect, but only if the flag is properly illuminated after dark. There are even locations where the flag must be flown 24-hours a day outlined in the code, including the White House and the Capitol, Fort McHenry2 and the USS Arizona Memorial at Pearl Harbor among others. And there's one location where the flag has flown continuously for more than 35 years... on the surface of the Moon.

It isn't enough just to raise and lower the flag on a pole, no; the flag should be hoisted briskly and lowered ceremoniously. Then it should be properly folded in a flag ceremony. Also, the flag should never touch anything beneath it, such as the ground or the floor... but contrary to popular belief it isn't necessary to burn a flag that has touched the ground. If it has been soiled it should be cleaned with mild soap and water by hand, but it needn't be destroyed unless it is unfit to fly. Burning is the preferred method of destroying a flag, but the code only states it must be disposed of 'in a dignified manner', and a local branch of the VFW3 can assist with this.

Similar to the flag not touching the ground or anything beneath it, it is improper to drape a flag over any part of a vehicle, train or boat. If a flag is to be displayed on a car for an occasion such as a parade or motorcade, the flag must be fixed to the chassis or clamped to the right fender.

A flag can be draped over a casket for a funeral procession, provided that it is so placed that the union4 is at the head and over the left shoulder of the person in the casket. The flag should be removed and properly folded before the casket is lowered into the ground.

The flag should be displayed every day, but especially on certain patriotic holidays. These include the birthdays of Martin Luther King Jr (third Monday in January) and Presidents Lincoln (12 February) and Washington (third Monday in February), Easter Sunday, Mother's Day (second Sunday in May)5, Navy Day (27 October) and Christmas Day, among others. Flags should also be flown on state holidays, the anniversary of a state's admission, and any other day the President designates that flags specifically be flown.

Flags should be flown at half-mast on Patriots Day (11 September), National Pearl Harbor Remembrance Day (7 December), Memorial Day (last Monday in May, only until noon) and any other day the President declares a state of mourning. Flags should be at half-mast for 30 days following the death of a sitting or former President, for 10 days following the death of a Vice-President, and for shorter periods for various other members of government. When raising a flag to half-mast, it should first be hoisted to the peak of the mast before being lowered to half, then raised again to the peak before being taken down. All ceremoniously, of course.

Probably the most common violations of the Flag Code are against items d and i of section 176: The flag should never be used as wearing apparel, bedding, or drapery and The flag should never be used for advertising purposes in any manner whatsoever. It should not be embroidered...printed or otherwise impressed on...anything that is designed for temporary use and discard.

It is okay to put a flag emblem on an article to be worn, so long as it is positioned correctly. The union of the flag must be closest to the wearer's heart (so for instance, an emblem worn on the right sleeve or breast would appear backward, with the union in the upper right-hand corner)6. A flag on a t-shirt or other apparel shouldn't have any writing or other image imposed upon it. When the shirt has been worn down to the last threads however, it would probably be best not to turn it into a dust rag, which wouldn't quite be a dignified disposal. American Flag boxer shorts should be considered downright rude.

But putting the flag on something meant for use and discard? No flag-imprinted paper plates and napkins for Independence Day barbeques? No flags on the packaging of products made in the USA? No flags printed in magazines or newspapers? And what about American Flag postage stamps, issued in dozens of different series over the years by the US Postal Service7? All of these, of course, violate the Flag Code. But there aren't any penalties, remember?

Serenaded in song, worn with pride, flown across the land, the American Flag is a banner recognised around the world. You can learn more about the US Flag Code at usflag.org.

1William Canby was Betsy Ross's grandson.2Ft McHenry in Maryland was the site of the flag that inspired the writing of The Star Spangled Banner, the National Anthem.3Veterans of Foreign Wars organisation.4The union is the stars on the field of blue.5But not, for some reason, Father's Day.6Similarly, flags on aeroplanes, cars or other vehicles should have the union closest to the front of the vehicle so that the flag appears to be flying when the vehicle is in motion.7This one actually breaks more than one part of the code, as there will be another image imposed over the flag when the parcel is postmarked.