Barbecues Content from the guide to life, the universe and everything 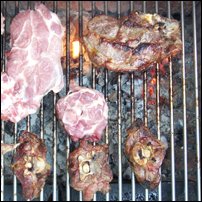 The barbecue*, is a popular method of outdoor summer cooking. The term 'barbecue' refers not only to the piece of equipment on which the cooking is done, but also the food that results from the cooking and the event of eating the food itself.

As soon as the first day of summer arrives, multitudes of people can be seen heading to their local store to buy a barbecue. The only barbecuers not heading to the store on this day are the organised people, who paid half-price for their barbecues when everybody else was Christmas shopping. There are some others who think they can get another year of service out of the barbecue they bought two years ago. The one which will collapse on them on its first use of the year due to the rust which has corroded one of the legs.

Next stop is the local supermarket. The order of events at the supermarket is:

The supermarket management will place barbecue utensils at strategic points of the store. These are items used to turn over the burgers, and to retrieve sausages that fell into the hot charcoal. The utensils actually cost twice as much as the barbecue and the food put together, and only last for one barbecue event before falling to pieces. Also placed at strategic points are pieces of meat, coated in unnamed substances, ready to be skewered and put onto the barbecue grill.

Once the barbecue and all its requirements have been brought home, it is time to assemble the barbecue. This will have been sold 'flat-packed for easy home assembly'. Home assembly entails removing all of the contents from the box, reading the instructions which have been translated from an extinct foreign tongue, and finding the closest thing available to the obscure tools required to assemble it. When you think you've finished assembling it, it's important to comment,'That should be OK, I think it's meant to wobble like that', in a cheerful fashion.

At this point it is time to find a suitable location to place the barbecue. Popular opinion seems to favour placing the barbecue as close as possible to neighbour's washing lines. Also there is no point in trying to find a position where the smoke won't get into the eyes of the person who's doing the cooking, unless exercises in futility are of particular interest to you.

On the side of every packet of barbecue charcoal are instructions for optimum barbecue cooking, hich state that the flames should be allowed to die down before cooking commences. This is not the popular way for barbecuers. The popular way is to wait until the flames are at their highest, and add some sausages. The fat from the sausages helps to intensify the flames, which is how barbecue cooks arrive at that special barbecue flavour. This is the flavour of burned sausage skin blended with raw sausage meat. The flavour of the sausages if the flames are allowed to die down is very different1, but it is most uncommon to experience barbecue food cooked this way.

After this point, the remaining food is added to the barbecue grill and served up either overcooked or not cooked at all. The beer is consumed rapidly, compensating for a lack of perfection in the food.

What to Bring with You

If you are ever invited to a barbecue, here are some of the things you should bring with you:

1Some would say better.