Postage Stamps Content from the guide to life, the universe and everything 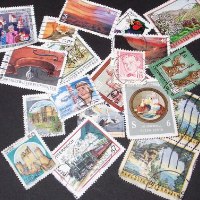 Small bits of paper, which enable people to send letters and packages across town or around the world, stamps have a denominated value which denotes the cost of postage.

Postage stamps first appeared in the United Kingdom in 1840. Before stamps existed, letters would arrive 'postage due'. Imagine paying for all your junk mail! The first stamps were tiny black-and-white ones bearing a picture of Queen Victoria's head and they cost a penny. These became popularly known as 'Penny Blacks'. The USA produced its first stamps in 1847, bearing portraits of Benjamin Franklin and George Washington. By about 1860, most countries of the world had begun to issue their own postage stamps. Early stamps featured fancy scrollwork and engraved portraits of national heroes.

Every nation except the United Kingdom must print the name of the country of issue on their stamps. The UK is exempt from this practice as they were the first to issue postage stamps. Instead, British stamps will feature only a portrait of the current ruling monarch and the price paid to cover postage.

Collecting stamps, or philately, is a popular hobby around the world. Some folks collect stamps from a particular country or region. Others are topical collectors, gathering stamps with pictures of birds, fishes, or works of art, for example. Many collectors keep their stamps in stamp albums, books specially designed to keep the stamps safe from wear and tear while on display.

As well as hobbyists, there are professional philatelists who will trade rare stamps at prices well in excess of their face value. Stamp rarity can stem from low numbers in circulation, their age or even printing errors where, for example, a portrait is printed upside down or the incorrect colour dye was used on a small percentage of issued stamps.

Anyone who believes philately is strictly for kids should know that a block of 48 two-penny stamps from 1840 were recently valued at £2.75 million.

A storm arose in the teacup of philately when an official UK postage stamp was issued which featured the likenesses of both Freddie Mercury, the singer, and Roger Taylor, the drummer, from the band Queen. The Royal Mail's rules state that only members of the Royal Family may appear on stamps during their lifetime. Roger, not a royal, is still alive.