17th Century Military Flags Content from the guide to life, the universe and everything 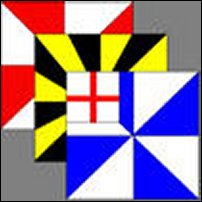 A flag1 is a piece of material fixed to a staff which represents a person or a group of people with a common interest or purpose (mainly country representation or military usage). Flags may come in any size and shape, but the most common is square or rectangular. Flags are also known as 'colours' or ensigns.

It is important to note that the significance of the colours used on the flags is based upon European ideals. To what degree this influence extended to the rest of the world (as it undoubtedly did) is not within the scope of this Entry.

The History of Flags

In military terms the flag or colour is the emblem that represents the life of a regiment, especially battle honours. The pride in the regimental flag was such that, if it was captured, the regiment would be disbanded.

As far back as 9AD, Emperor Augustus disbanded legions which lost their Eagle2 in the Teutoburger Wald. Arminius was a Germanic chief who had been raised in Rome and trained in the Roman army. His people were oppressed by the Roman governor Publius Quinctilius Varus, so he organised a rebellion, destroying eight legions in the Battle of Teutoburg Forest (Teutoburger Wald) and forcing the Romans back to the Rhine. The legions' Eagles were captured and the Roman officers (except for Varus who had killed himself with his own sword when faced with defeat) sacrificed on pagan altars. The defeat was effectively the end of the expansion of the Roman Empire north of the Rhine. Only three Eagles were ever recovered: Legion XIX; a second Eagle of an unknown legion; and a third Eagle was discovered 30 years later and returned to Rome.

Flags came to prominence with the demise of the armoured knight around 1490, when firearms began to be used. Hitherto the personal arms and colours of a knight enabled his peers to monitor his conduct during a battle, and were of little relevance to the common soldier.

When Coats of Arms were no longer worn, the identification of the leader and his company commanders had to be displayed in some other way, so the men in a regiment could then follow the action and have a rallying point. Common soldiers were easier controlled by their officers and more complex tactics could be used in battles. As time went on, the commander's personal colour was succeeded by the regimental or national colour or flag.

From about 1540, the flag or colour was carried by a commissioned officer known as an ensign who took his rank from the fact that he carried the ensign. Although this rank was abolished in 1871, nowadays, the status of the flag is celebrated in the UK in the annual ceremony of 'Trooping the Colour' on the monarch's official birthday. This practice started when a regiment's colours were used as rallying points for soldiers engaged in battle. Commanders would have the ensigns, carrying the regimental colours, march between the ranks during parades so that the soldiers would become accustomed to the appearance of their regimental colours.

In the 17th Century military flags underwent a proliferation due to the English Civil War, as various new regiments were created on both sides. A regimental commander would need his own flag, the purpose being to tell everyone who you were, and who you supported. However, there was a secondary message in the colours chosen for one's flag. These could refer to what you stood for, if your family had a Coat of Arms, for example, this would normally form the basis of your flag.

The flags were hand-painted on material (including silk) and measured about six feet square. The colours and devices (another name for an emblem or a badge) that were used are somewhat speculative, as unfortunately most of the records for the regimental flags of the period have been lost. Fortunately, a few which still exist make the basics clear.

The flag of the Colonel3 who was given the task of recruiting and equipping a regiment at his own expense4, was reported to have been a plain ground - that is a flag of one colour with no other markings. The company colours were the same background as the Colonel's colour, however, they commonly had a St George's Cross in the top corner nearest the flag staff, which was visible from both sides (a Canton), and a device. Almost anything could be used for the device: stars, orbs, lions, dogs, swords, dragons - the list is almost endless5. The devices on the company flags were laid out as on playing cards for example: Ace (or 1), 2, 3, 4, 5; and were carried by an officer (the ensign) who lived with the flag and would protect it with his life. One to five of the devices were used depending upon the seniority of the Captain commanding the company. The more devices on the flag, the lower the seniority.

Records show that there were other systems used. The Venn design, named after the English logician John Venn, is where an area of overlap between two shapes (sets) contains elements that are common to both sets, representing a third set. Nevertheless, the colour rules remained the same on both sides.

The gyronny system was a popular flag-type with the Royalist army. To get an idea of how this looked try the following exercise:

That's it, now you have drawn a flag in the style of the gyronny system!

Take the flag of St George (a white flag with a red cross). One interpretation of the meaning could be that the white background represented peace and purity, whilst the red cross represented courage and military strength.

A Quarter Or Canton

It is probable that the colour rules of the flags could be reflected in the uniform coats of the regiments chosen by their commanders in the English Civil War, three of the Parliament regiments are given for example:

The combinations used, appear to give a clear and definite message. This could also have been calculated to have an effect upon the morale of the men.

1The study of flags is called vexillology from the Latin word vexillum meaning a square Roman flag.2A staff bearing the legion's battle honours, the legion's number, and topped with an eagle standing on a bar with the legend SPQR: Senatus Populusque Romanus - The Senate and People of Rome.3The officer in charge of a regiment. In the English Civil War period the Colonel was always a nobleman or other person of rank.4 With the promise of a grant to cover his costs.5For example: One regiment used hounds, standing, facing the flag staff. Talbot is the family name of the Earl of Shrewsbury, who had a talbot (a now-extinct, pure white hound with a large head, broad muzzle and long ears) for a badge and two talbots for supporters.