Red Dwarf - The TV Series Content from the guide to life, the universe and everything 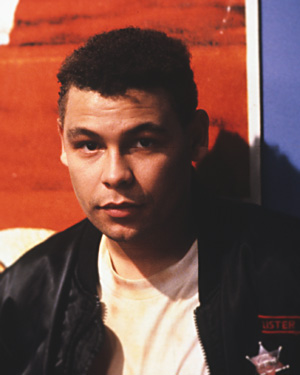 The last human alive, a demented computer, a neurotic hologram and a hygiene-obsessive android - not the most conventional cast of characters for a sitcom, but despite (or perhaps because of) this, Red Dwarf has become one of the BBC's most popular comedy exports.

The show's creators, Rob Grant and Doug Naylor, first got the idea after they wrote a short-lived radio series, called Son of Cliché, which was broadcast in two six-episode runs on BBC Radio 4 in 19841. The basic story told of a space cadet named Dave Hollins, who was trapped alone on a spaceship with a slightly senile computer called HAB (voiced by Chris Barrie). Though there was no real connection with their subsequent TV series, this show provided the genesis for Red Dwarf.

Originally turned down by every major TV network, Red Dwarf was finally commissioned by BBC Midlands in the 1980s and was the first successful sci-fi comedy series since The Hitch-Hikers Guide to the Galaxy, 10 years before. Even then it was nearly scuppered two months later by a technicians' strike.

Set three million years in the future, the main plot revolves around a human, Dave Lister, who works onboard the Jupiter Mining Corporation ship Red Dwarf. Red Dwarf is five miles long and three miles deep with a crew of 500. Dave Lister, along with his room-mate Arnold Rimmer, is the lowest-ranked human on the ship.

After Lister is discovered to have smuggled aboard a stray cat called Frankenstein, he is placed in stasis (frozen in time) for the remainder of the tour of duty. But while he is asleep, a minor maintenance accident floods the entire ship with radiation, wiping out the crew. The ship's computer, Holly, decides to leave Dave in stasis until the radiation subsides... three million years later.

Dave learns that his only companions are 'Cat', a life-form that evolved from his old pet, Frankenstein; a hologram simulation of Arnold Rimmer, one of the dead crew and, ironically, the man in the Universe that Lister hates the most; and Holly, the ship's computer. Later on in their travels they recruit a mechanoid called Kryten who they find abandoned in the ruins of a crashed spaceship.

The last human in the universe, who has a penchant for curries and beer. Before his detention in stasis, he had an obsessive crush on crewmember Kristine Kochanski, an addiction to beer and vindaloo and a dream of owning an island in Fiji.

A hologram of Lister's shipmate, who was killed in the radiation leak. Only ranks slightly above Lister on Red Dwarf (the 'skutter' maintenance robots rank higher as they have a stronger union). Tends to write 'I am a fish' repeatedly on exam papers, before saluting and passing out. Is overly-impressed by officers and longs to be accepted into their ranks. His chances are very nearly less than nil. Like all holograms, Rimmer wears a shiny 'H' icon on his forehead.

A highly evolved Feline sapiens, direct descendant of 'Frankenstein', the pregnant female cat Lister smuggled aboard. The best dressed being in the six known universes. His vanity is matched only by his desperation to lose his virginity with a willing female.

Sanitation android with a missing sanity chip, who irons bras on his head. He was rescued from the Nova 5 spaceship. After an accident, Lister was forced to rebuild Kryten from scratch. The result left Kryten with a faulty vocal chip that made his voice sound Canadian.

Red Dwarf's shipboard computer with an IQ of 6000. Sadly, being left with only his own artificial intelligence for company has left Holly a little unstable. After meeting a female version of himself in a parallel universe, Holly decided to give himself a head sex-swap, though after he was rebuilt by nanobots he returned to his old face.

In the original timeline, Kochanski died along with the rest of the Red Dwarf crew. She did, however, appear in flashbacks and as a hologram (in reality Rimmer pretending to be her to trick Lister). However, the Red Dwarf crew later met a version of Kochanski from a parallel universe where she, not Lister, was placed in stasis. She decided to cross over to Lister's dimension and continue her travels as a member of the Red Dwarf crew.

The show's end credits were rolled over a cheery, camp theme song which contains some particularly bizarre lyrics (Lyrics and music by Howard Goodall):

The American NBC network and Universal commissioned a pilot for a prospective American version. The character of Lister was changed to be more of a 'Han Solo' than the slob of the British version, while Holly was played by Jane Leeves who would later find fame as a castmember of the US sit-com Frasier. The 'H' on Rimmer's forehead was replaced by a silver ball and, significantly, both of the roles originally played by black actors were recast as Caucasian for fear of 'political incorrectness'.

This pilot was not enough to gain a commission and a second pilot was requested. Refilming the scenes that involved characters that had been recast (including those with The Cat, now played by Terry Farrell, who would go on to play Jadzia Dax on Star Trek: Deep Space Nine), the second pilot also included model footage taken from the British show, while Rimmer's 'H' was restored.

This second pilot also failed to convince the executives of the worth of the project and Red Dwarf USA was abandoned.

After a gap of ten years, Red Dwarf made a surprise return to TV screens in the guise of three brand new specials, filmed for the British digital channel Dave and aired over the 2009 Easter weekend. Back to Earth - Parts One to Three saw, most of, the orignal cast reunite3 for a reality-bending story that took place on present-day Earth and saw Lister confronting his real acting alter ego on the set of the ITV1 soap Coronation Street. The episodes pulled in record viewing figures for the channel, convincing it to commission a full new series of the comedy, due to be broadcast on Dave in 2012.

1The script for one of the 'Dave Hollins, Space Cadet' sketches is included in the book The Red Dwarf Omnibus.2The collective pen-name for Doug Grant and Rob Naylor3Minus either Norman Lovett or Hattie Hayridge as Holly.