Strange Shapes in Space Content from the guide to life, the universe and everything

Astronomy is a fascinating subject; like Forrest Gump's proverbial box of chocolates, you never know what you're going to get. Take nebulae for instance, which can appear in any shape, colour and size. Some nebulae have been given common names as well as their scientific designation to reflect their resemblance to the object in question, eg the Ant, Pacman and even the magnificent Thor's Helmet. It's intriguing that we see MWC 922, aka the Red Square Nebula face-on, or we'd never know that it looked like a giant 'X' in space! Other nebulae seem to fit a particular theme: who could fail to be enthralled by an image of a witch around the time of Hallowe'en? That's not the only spooky shape in space either! Arachnophobes won't want to know about the spider crater on Mercury! Your imagination can run riot when looking at pictures of dark scary figures which evoke thoughts of trapped souls in Hell. Another hair-raising image is that of the anthropomorphic screaming skull, which is a hundred thousand light year-sized cloud of hot gas surrounding a black hole. Thankfully it's nowhere near our own galaxy: it lies over 320 million light years1 away, beyond the stars which make up the hero constellation Perseus.

The colours we see in the pictures provided in this Entry are filtered so that separate elements can be highlighted. This 'false colour image' means that if we were somewhere a lot closer to a particular object, looking at it with our own eyes rather than through the lens of a telescope, its true colour would be different. Here are a few intriguingly-shaped objects in space: 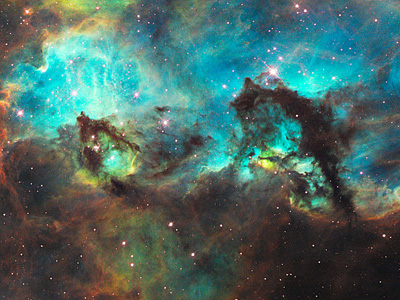 Seahorses (Hippocampus) are really cute, but it's odds-on you've never seen one this size! Created by cosmic dust and measuring some 20 light years in length, it inhabits the LMC (Large Magellanic Cloud), a dwarf galaxy close to the Milky Way.

The Vain Heart of a Queen

The Heart nebula, also but not as endearingly known as IC 1805, resides in the constellation said to represent the vain Queen Cassiopeia of Æthiopia. In Greek mythology this mortal queen angered the god of the sea Poseidon when she boasted that her daughter Andromeda was more beautiful than the Nereids (sea-nymphs). In order to appease Poseidon's wrath, Andromeda had to be sacrificed to Cetus, a sea monster. The people of Æthiopia agreed and chained the princess to a rock to await her fate. The tale ends happily as she was rescued by the demi-god Perseus, who just happened to fly overhead on the winged horse Pegasus. He turned the sea monster to stone by showing it the head of the gorgon Medusa, a one-time conquest of Poseidon's, whom he had just slain. Queen Cassiopeia was immortalised in the heavens along with the other main players of the story, but, still seated upon her throne, the stars which represent her are so close to the Pole Star that half the time she appears to hang upside down, no doubt to teach her a lesson in humility.

Nature favours curved lines and circles, so what is causing the straight-edged rectangular shape of the protoplanetary Red Rectangle Nebula? It has been speculated that the central binary star system of the nebula creates a pair of jets that spin. From our vantage point 2,300 light years away we see the 'drag' of the fast spinning, causing a webbed effect between the jets. Voilà, we see what looks rather like a sparkling bow-tie in the unicorn constellation Monoceros.

Ranging in colour from the pinky-red Rosette Nebula to the ice-blue Iris Nebula, there are plenty of floral-shaped nebulae to please any green-fingered astronomers. Be sure to check out the Tulip Nebula which is quite enigmatic. 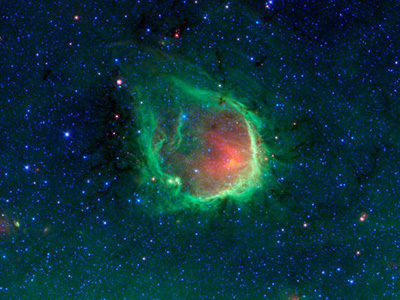 RCW 120 is an emission nebula in the constellation Scorpius. It contains within it a star in its infancy; when it has ignited it will be one of the biggest stars in our galaxy. An image of RCW 120 was released by the team working with the Spitzer Space Telescope. Some astronomers have likened the nebula to the green ring created by the Guardians of the Planet Oa for the superhero 'Green Lantern'. However, opticians would surely marvel at RCW 120's astonishing resemblance to a dissected eye.

Eyes attract attention, especially when they are millions of light years away! In the centre of warped galaxy NGC 1097 lies a supermassive black hole. Because we see this galaxy face-on, we can see the super-heated central region, which looks just like a lit-up bull's eye on a dartboard. NGC 1097 resides in the burning furnace constellation Fornax.

Another 'eyeful' is MyCn18, a planetary nebula in the southern constellation Musca. A star at the end of its life has ejected its outer layers of gas. The central portion, which contains the dying star, looks remarkably like a human eye. Eventually all that will be left of MyCn18 will be a white dwarf star.

Yet another planetary nebula with a central eye is the Cat's Eye. One day such a fate will happen to our own Sun, when it is in its death throes. One can only hope its swansong will be as beautiful as this.

Due to gravitational forces, some galaxies collide with each other, with quite spectacular results. Even colossal galaxies can be grotesquely affected by a passing dwarf galaxy. It can take many millions of years before some kind of order is restored and the merger is complete. Because these galaxies are so far away from us, we cannot see the mergers in real-time, but we can see snapshot 'stills' of the encounter. Galaxies tend to be round, so what can we make of this seemingly square one? Other distortions cause shapes which can be likened to things here on Earth, such as the fabulous mice, an atom or even the perfect ten of Arp 147. Romantics will notice that a composite image of Arp 147 in X-ray, Optical, Infrared and Ultraviolet, taken by the Chandra X-ray Observatory and the Hubble, GALEX2 and Spitzer space telescopes, shows the galaxy on the right has a heart-shaped centre. 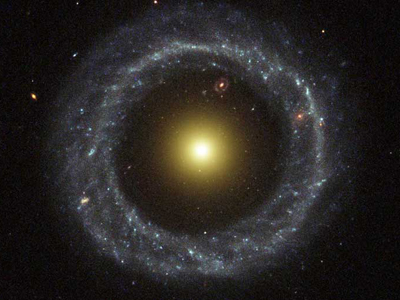 Hoag's Object aka PGC 54559 is an enigmatic ring galaxy; a true beauty born from calamity and a puzzle even the experts can't explain. Named after its discoverer the US astronomer Arthur Hoag who reported it in 1950, Hoag's Object has a radius of 100,000 light years: that's about the same size as our own Milky Way. It is situated above the snake's head asterism3 in the northernmost portion of Serpens Caput, close to the border with Boötes. It has a central elliptical core and 70,000 light years away from that core is an outer ring. This could have been the arms of a spiral galaxy, which are now joined. We know that the ring and the central hub do form a single galaxy rather than being just some line-of-sight anomaly of two items at totally different distances from us, because their redshift4 is the same, indicating that they are the same distance from us. From our vantage point at 600 million light years' distance, Hoag's Object looks like a sparkling brooch. No-one knows for sure how it formed to look this way, but that doesn't stop astronomers from speculating. Popular theories include:

Uncannily, in the space that we can see through, another ring can clearly be seen in the background, which could be millions of light years more distant than Hoag's Object. It could be another ring galaxy, or maybe a supernova.

Heart-shaped Crater on the Moon

There's a lunar crater named after Regiomontanus5 which is superimposed by the Purbach crater in such a way that it appears heart-shaped.

The human face feature on Mars caused a kerfuffle among conspiracy theorists who thought that NASA and/or the American government were trying to conceal the fact that there had once been an intelligent race of Martians capable of building monuments visible from space. However, a close-up by the European Space Agency's Mars Express of that particular Martian geological feature viewed from another angle showed quite clearly that 'the face' was a mere trick of the light when viewed from above.

1A light year is the distance light travels in one year, roughly 5.88 trillion miles or 9.46 trillion km.2The Galaxy Evolution Explorer (GALEX) is an orbiting space telescope observing galaxies in ultraviolet light.3A group of stars which isn't a recognised constellation.4If an object is travelling away from us quickly enough, the light waves from it are stretched out, making visible light appear redder than it actually is, hence the name 'redshift'. Hoag's Object is travelling away from us at a speed of 12,740km/s (7,916 miles a second).5Birth name Johannes Müller von Königsberg (1436-1476).