Hanny's Voorwerp Content from the guide to life, the universe and everything 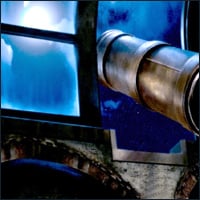 What is 'Hanny's Voorwerp'?

In 2007 a website classifying galaxies for a project called Galaxy Zoo was created. Amateur astronomers couldn't sign up quickly enough and within 48 hours the server had crashed. Luckily the funding was there to expand and the project took off. It wasn't long before the most-obsessed analysers were invited to join a forum where they could chat and upload interesting images.

At the Galaxy Zoo forum a Dutch schoolteacher called Hanny van Arkel posted a link to one of her discoveries, which was rapidly nicknamed Hanny's Voorwerp1. No-one, not even the Zookeepers (the experts running the Galaxy Zoo project), knew what the object was. It's the wrong colour (green2) and the wrong shape (it's either a frog or a gremlin) to be a 'proper' galaxy, and it contains no stars, but it was classified as one by the Sloan Digital Sky Survey (SDSS) programme.

According to the SDSS data, the Voorwerp is blue, but that is because the equipment has different filters to the human eye. If we were able to view the Voorwerp with the naked eye it would be green. Research is ongoing, in the meantime the 'Kermit-galaxy' was featured as Astronomy Picture of the Day on 25 June, 2008. Hanny's Voorwerp has even been added to the search facility on Google Sky, putting it on par with the Horsehead Nebula in Orion!

'Armchair astronomer' Ms van Arkel from Heerlen, near Maastricht, wasn't even interested in astronomy before the advent of Galaxy Zoo, a fact which makes night-sky enthusiasts roll their eyes heavenwards. She only got into the programme after finding out about it through a chatty fellow teacher. Up to 2008 her discovery has been focused on by the William Herschel Telescope in La Palma, Spain, and the Swift Space Telescope.

Hanny is perhaps as famous as her discovery, research on the attractive 25-year-old blonde herself brings up 17,900 Google 'hits' (September 2008). She has her own blog at the Galaxy Zoo forum where she chats about how much in demand she is with the press as well as for interviews and personal appearances at universities, astronomy societies and schools. Thanks to her and the success of the Galaxy Zoo project as a whole, more science projects may be offered up for public participation.

In August, 2008 an update on the Voorwerp was released to the press. Scientists think that neighbouring spiral galaxy IC 2497 in the constellation  Leo Minor once harboured a quasar which is no longer visible to us. However, the light that the quasar emitted is still travelling towards us, and it is this light which is causing the gas to glow. In effect, what we are seeing when we look at Hanny's Voorwerp is a 'cosmic ghost', or 'light echo'. This is the only object of its type currently known to astronomers, so it's been given a brand new classification, and catalogued: SDSS J094103.80+344334.2.

...at first thought to be a galaxy of dimensions and form rather similar to our own, now thought to be entirely gaseous, as though an entire galaxy were vapourised, perhaps by the explosion that produced the 'hole' on the left of the 'imp' ...puts me in mind of Hoyle's figures on the energy required to vaporize a single star; he put it on the order of 10 to the 27th ergs... perhaps a clue to it all is the stunning number of ultrahot blue-white quasars in the photo.
– an h2g2 Researcher

The Sky At Night

In the September, 2008 edition of the BBC's The Sky At Night programme, Hanny was interviewed about the Voorwerp by the show's host Sir Patrick Moore. Afterwards Sir Patrick chatted with Galaxy Zoo co-founder Dr Chris Lintott about how the project was progressing in general, and enquired if there was anything concrete on the Voorwerp. Dr Lintott could hardly sit still as he related that he'd got 'Hubble time' booked3 after the orbiting observatory has been upgraded and serviced by the Space Shuttle. This was his first opportunity to play around with the space telescope and at the top of his list to focus the Hubble on was Hanny's Voorwerp.

1Dutch for 'object' or 'thing'.2Scientists now know that the green colour of Hanny's Voorwerp is caused by ionised oxygen.3This is the astronomy world's equivalent to claiming a table at The Ivy, the most exclusive restaurant in London.