Singing Saturn's Hexagonal Mystery Content from the guide to life, the universe and everything 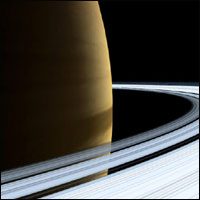 Thus it is no longer surprising that man, imitating his creator, has at last found a method of singing in harmony which was unknown to the ancients, so that he might play, that is to say, the perpetuity of the whole of cosmic time in some brief fraction of an hour, by the artificial concert of several voices, and taste up to a point the satisfaction of God his maker in his works by a most delightful sense of pleasure felt in this imitator of God: music.
- German mathematician and astronomer Johannes Kepler (1571 - 1630).

We all know how drop-dead gorgeous the magnificent planet Saturn is. If you've never seen it in the night sky then you'll have seen it in artwork, screen wallpaper etc. It's the astronomy-mad child's planet of choice for their bedroom decoration and lunchbox design. There's something about the rings constantly encircling the planet which attracts the eye. Even though it isn't possible to land on the gas giant, to look up and gaze in awe at the magnificent ring system, that doesn't stop us from imagining what it must be like.

We already knew that the ring system resembles the rotation of a vinyl LP while being played on a turntable. Then scientists found out that the rings play tunes, broadcast as radio waves. The frequency was too high for human aural reception, but a team at the University of Iowa lowered the tone to make them audible. The astonishing, distinctive sounds are believed to be vibrations from the impact of space debris crashing into the frozen particles which form the rings.

What we believe we're experiencing is a Cymatics1 performance on a universal time and scale. It's comparable to a Humpback whale singing its song in the darkness of space. If we watch the north pole of Saturn long enough, we should experience more geometric patterns as the frequency or pitch changes.
- Stuart Mitchell.

Eminent scientists and astronomers have been studying Saturn for centuries. Governments have forked out billions of their respective currencies to send probes to map the Saturnian system, including the moons. Prior to the end of 2007, 52 natural satellites had been logged and named. By far the biggest surprise in all the studies has been the discovery of something on the planet itself. A strange, hexagon-shaped feature in Saturn's north polar region was first photographed by Voyager 1 in the 1980s. The latest probe, Cassini, imaged it again in March 2007, proving it to be an enduring element.

We've never seen anything like this on any other planet. Indeed, Saturn's thick atmosphere, where circularly shaped waves and convective cells dominate, is perhaps the last place you'd expect to see such a six-sided geometric figure, yet there it is.
- Atmospheric expert Kevin Baines of the Cassini team at NASA's JPL.

It looks like a huge honeycomb with other hexagon shapes enclosed - like a set of neatly stacked pastry-cutters. And it is huge: with a radius of 15,000 miles (25,000km), it could swallow at least three Earths. This hexagon-shaped figure - the six sides are very nearly equal - extends 60 miles (100km) deep into the atmosphere. Scientists are mystified as to why the polar vortex on Saturn is hexagonal (on Earth the polar winds blow in a circular direction). Is the hexagon anything to do with the hexagonal cells that form in cooking oil when you heat it in a pan? That would mean that there's a heated column rising from the surface. But apparently it can't be ruled out that the atmosphere is sharply stratified and the vortex is trapped inside one of the layers and doesn't necessarily connect to the surface. Clouds whirl through the passages between the walls of the inner hexagons at phenomenal speeds, like the dust-trail of an intergalactic Roadrunner with an extra-terrestrial Wile E Coyote on its tail.

I reckon it was designed by Slartibartfast during his hexagonal period.
- An h2g2 Researcher.

1Cymatics is the study of wave phenomena.