The Four Main Reasons Why Scientists are Sometimes Incomprehensible Content from the guide to life, the universe and everything 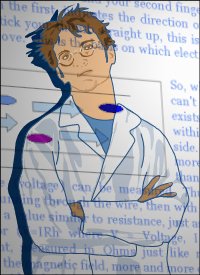 Why do scientists sometimes sound like they are talking gibberish? There are four main reasons:

Unfortunately, what is worst affected as a result of this lack of communication is science itself. Science grows the fastest when there is free communication of ideas. A lack of comprehension is the first obstacle in communicating any idea. This is a problem both between scientists and lay people, and within the scientific community itself.

Bad communication skills are a result of the education involved in becoming a scientist. Science curricula are very time consuming - the workload can be quite hard. Each individual science course is usually already packed to the gills with information. There isn't any room for working on communication skills. As a simple argument, compare the number of essays that an English, history, or political science major would write in the course of their education, as opposed to the number that a physics, biology or chemistry major would write. In most cases the number will be much higher for the non-science majors1.

Most of the communication that is done by scientists and mathematicians is done using numbers and symbols. This is not true for students in social sciences and humanities. Although all of these subjects (especially when studied at the graduate level) can be obtuse, the fact that non-scientists tend to use language to communicate gives them more practice using language, and thus makes them better communicators than scientists.

Many people encounter scientists in their roles as teachers. In general, teachers are expected to be better than average communicators. When faced with a scientist whose communication skills are not as good as teachers of other subjects, this can lead to frustration and disappointment between all parties concerned. The listener doesn't get the information they're looking for, and the scientist is frustrated in their attempt to share their knowledge.

In advanced fields, or whenever a scientific topic is studied at a high enough level, it generally starts to make use of ideas and concepts which are counter-intuitive. This is probably most famously demonstrated in Einstein's theory of relativity and quantum mechanics. The concepts that mass increases with increasing velocity and the possibility of being in two locations simultaneously are both ones which are never encountered in day-to-day experience. In order to grasp the counter-intuitive, it is first necessary to understand that intuition only applies within the range of experiences which were used to build that intuition. A big mistake that scientists make is to assume that their audience already understands the nature of intuition, and to jump immediately into a description of their counter-intuitive phenomena. This can be extremely frustrating for the audience, who then struggle to reconcile a bizarre-sounding phenomena with their intuition, when in fact there is no reconciliation to be had.

A lack of understanding makes it impossible to answer questions intelligently. The ability of a listener to ask questions can be critically important in determining whether or not the listener will understand an idea. By not understanding the material that he or she is trying to explain, the scientist will be unable to answer any but the simplest of questions. Even worse, rather than admit to not understanding, many scientists will attempt to answer anyway - this usually results in very garbled and illogical explanations - leaving the listener even worse off.

In some situations, science itself doesn't have an answer to a question that a listener might ask2. In these cases it is especially important to point this fact out to the listener - this can lead to great insight on both the part of the scientist and the listener. Unfortunately, many scientists will instead answer in a derogatory manner, with a phrase like 'because that's just the way it is'.

Without a doubt, this is the worst reason for a scientist to be incomprehensible. Like any profession, science will have its share of people who feel they have to build themselves up at the expense of others. This type of act, in which the scientist is almost deliberately incomprehensible, usually happens between scientists. It usually occurs when one scientist wants to prove that they are superior to another. Fortunately (and perhaps not coincidentally) most of the truly great scientists rarely, if ever, do this.

Communication is a Two-way Street

Lastly, it should be mentioned that sometimes prejudice of the listener can lead to a refusal to understand a scientist's explanation. This usually happens in areas of science where there is a potential or perceived risk to human life (or morals). The most famous of example of this is probably the debate over genetically modified food. In this case, the public has an intense fear of genetic modification, due to lack of understanding of the process, and also the pop culture mystery surrounding it. Despite the best efforts of scientists (and the marketing divisions of the companies they work for), a large percentage of the population of the world refuses to eat genetically modified food. Even countries that are on the brink of famine (Zambia, autumn 2002) have refused donated food that was genetically modified. This is potentially one of the most calamitous events that has resulted from the breakdown of communication between scientists and lay people.

1Of course, this is highly dependent upon individual colleges and universities.2For example, science can answer the question 'What is inertia?' but not 'Why is there inertia?'.