The Surprising Eruption of Comet Holmes Content from the guide to life, the universe and everything 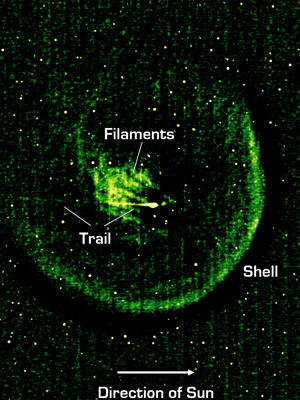 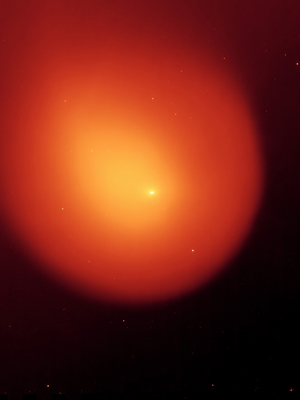 If there's anything guaranteed to get astronomers excited, it's something unusual happening, right now! Amateur astronomers are nocturnal hobbyists, a kind of secret society which only gives itself away when the run-of-the-mill becomes the extraordinary. Take periodic comet 17P/Holmes for example. An insignificant visitor to the inner Solar System first discovered on 6 November, 1892, it takes just under seven years to orbit the Sun once. Barely worth a mention in newsprint, Comet Holmes, as it was quickly dubbed, became a media megastar in October/November 2007. Instead of being around 17th magnitude  – only visible to powerful telescopes – the comet had an eruption, brightening it to 3rd magnitude over a period of 42 hours. This made it easy to spot with the unaided eye for anyone who knew which direction to look, even in cities with heavy light pollution.

Perseus does not look familiar to us due to the bright stellar object now.
– Comet Holmes observer reporting from Japan.

The eruption could have been caused by a build-up of gas below the surface suddenly spewing out, or another space body could have impacted with it. At the time of the eruption Comet Holmes was passing through a particularly volatile place, the Asteroid Belt, between the orbits of Mars and Jupiter, where there are lots of potential collisions. The dust surrounding the comet, an extended atmosphere called the coma, expanded to 1.4 million km (869,900 miles) in diameter. This meant for a while it was the largest thing in our Solar System, bumping the Sun, whose diameter is 1.392 million km (864,900 miles), into second place.

I looked outside after the sky was dark, to the north-east. The comet was in the constellation named after the hero Perseus, below the more familiar 'W' of Cassiopeia. Anyone familiar with those constellations would see a new, bright yellow 'star'. Binoculars revealed the fuzzy corona surrounding the comet. I was thrilled to witness this cosmic visitor, and yes, I waved! It's not known how long it will be until the next good comet will be available to take advantage of, you just have to grab these unexpected bonuses while you can!
– Amateur astronomer Ann Croft

Comet 17P/Holmes was featured as Astronomy Picture of the Day's star-of-the-day for 3 November, 2007. The celestial firework was honoured again on 5 November when it displayed a green coma and a blue tail. On 9 November, Astronomy Picture of the Day published an image of the comet and the surrounding skyscape, and the following day a stunning close-up, comparing the comet to a cosmic jellyfish. It was featured again on 5 December, looking outstanding against a dark, starry sky with open cluster NGC 1245 for company. Possibly the most stunning photograph of a comet ever taken was snapped on 11 November by Tony Cook. As well as the magnificent comet, it shows the detached tail covering background stars like a veil, comparable in beauty to The Pleiades.

Ancient cultures would have been awed by this unprecedented event, with astrologers writing up forecasts of momentous events and perhaps the odd few believing every word. The Chinese, in particular, thought comets were 'celestial ambassadors' and treated them with reverence, calling them 'guest stars'. So did Comet Holmes herald anything during the time of its eruption, 23/24 October, 2007? According to news events on those days, the following things happened:

Comet 17P/Holmes has an elliptical orbit and all being well should visit the inner Solar System again every seven years. Nothing of note occurred in 2014. The next return will be around 2021 with perihelion on 19 February, 2021. What will happen then is anyone's guess, but the anticipation is always good.