The Creation of the Space Shuttle Content from the guide to life, the universe and everything 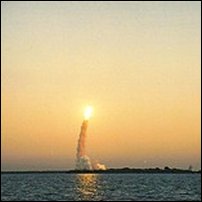 The idea of a winged reusable space craft had been around even before the start of the space race in the 1960s and early design and tests were done by the US Air Force in the 1950s, most notably with Dyna-Soar1, a reusable piloted glider perched atop a large expendable launch vehicle that... never got off the ground. The National Aeronautics and Space Administration (NASA) was also designing and testing various 'blunt body' and 'lifting body aerodynamics' ideas, two of the principles that made the Shuttle possible.

In the late 1960s, President Nixon set up the Space Task group, in order to look at where the US Space programme should go in the next decade. They unanimously agreed that the concept of reusable space craft should be developed and in January 1972, Nixon announced that after the success of the Apollo missions to the Moon, NASA was to begin work on a Space Transportation System (STS) programme, that would allow space travel to happen more frequently, more efficiently and much more cheaply. By NASA's own admission, the STS programme has never significantly achieved any of these things, although they are constantly looking at ways to increase turnaround on Shuttle flights and bring costs down.

The original idea for the STS programme was for it to be fully reusable, so that all the parts used during lift-off could be used again for the next launch. This would have meant that the Orbiter would be split in two. The first part would power the Orbiter up into the atmosphere at lift-off, break off, and then would glide back down to Earth. The second part would then continue up into space and was intended to carry up to ten people. This idea was discarded after the Budget Bureau wouldn't give NASA the $10 billion for it to work. Instead, NASA bought the cost down to a much more acceptable $6 billion by re-designing it so that the external tank is jettisoned once it has been emptied and the solid rocket boosters are recovered from the ocean after they have broken off two minutes and eight seconds after lift-off. The Orbiter then continues into space.

Studies and development on the Shuttle's major propulsion systems were carried out at the Marshall Space Centre, and other engine development and study was delegated to three engine companies, Pratt and Whitney Aircraft; Aerojet-General Corporation; and Rocketdyne Division, all under the watchful eye of Marshall. Later a Space Shuttle Task Team was set up to centralise the development of the Shuttle and this was subsequently replaced by a permanent Shuttle Program Office.

On 15 March, 1972, Dr Fletcher, the NASA administrator at the time, announced that the Space Shuttle will be lifted into orbit by recoverable, reusable 'solid rocket' motors, further reducing costs when compared with liquid-fuelled rockets used in all previous manned missions to space and a contract to produce the Space Shuttle's main engine is signed with RocketDyne.

The external tank's2 development wasn't completed until 1975, about two years after testing had begun on the Space Shuttle.

The first proper tests of the STS programme were taken out on a small-scale model of the vehicle, giving NASA data for development and design. The first time the main engine was fired was in a simulator by NASA engineers, meaning they could test and verify their theories on the main engine before construction. The main engine was then completed on 26 March, 1975, and statically tested4 over the following few months. Construction on Columbia then began in the same year, for lift-off towards the end of the decade.

Atmospheric testing was carried out mainly on the Space Shuttle Enterprise, which never went into orbit, but was instead piggy-backed to heights of up to 26,000 feet and dropped from a modified Boeing 747 Shuttle Carrier Aircraft (SCA) or simply flown through the air by the SCA. The testing of Enterprise led to many modifications to the Shuttle, most notably preventing Pilot-induced Oscillation (PIO) occurring, a dangerous control problem during landing. Just in case you're wondering, the Space Shuttle Enterprise is named after the Star Trek vehicle of the same name and allegedly Trekkies weren't happy to learn that 'their' Space Shuttle was the only one not to go into Space.

After all the testing and development work was complete, NASA ended up with a Shuttle which could carry objects 60 feet long, 15 feet in diameter and weighing up to 65,000 pounds, with a robotic arm5 and a main engine capable of producing 370,000 pounds of thrust each and are throttle-able between 65% and 109% of rated thrust. The main engines are even designed to be reused 50 times and burn liquid hydrogen and liquid oxygen contained in the external tank during lift-off.

In case anyone wishes to know, a Space Shuttle lift-off craft consists of the orbiter6, three main engines, the external tank and two solid fuel rocket boosters. So there. Oh yes and the robotic arm. Its 'official' name is the 'Remote Manipulator System' (RMS) and its nickname is the 'Canadarm' because, yes, it was made in Canada. It's controlled from within the crew compartment and is attached to the upper port-side of the cargo bay by a flexible shoulder joint. It has two further joints roughly corresponding to the elbow and wrist joints of the human arm. It is tipped with an 'end effector' which can hold corresponding joints on the cargo for manipulation. And it looks pretty snazzy.

Another interesting snippet is that the SRBs are 149.2 feet in length and each one produces 2,650,000 pounds' thrust. The solid fuel is a putty-like mixture of aluminium powder, ammonium perchlorate oxidiser and iron oxide to control the rate of burn. It's held together with a binding polymer. The SRBs are ignited after the main engines are confirmed at full thrust and take just over half a second to develop full thrust.

During orbit control of the Orbiter is achieved through the Reaction Control System (RCS). Small thruster rockets clustered in pods at the front and rear of the Orbiter are fired by the pilot with a hand controller in the cockpit. Primary thrusters enable rapid rotation of the orbiter around its three axes of Roll, Pitch and Yaw, and for sideways movement in the orbit (Translation). Smaller vernier thrusters achieve the same axial rotation but more slowly.

The Orbital Manoeuvring System (OMS) includes the two engines housed in the rear pods and are used to achieve major velocity changes to make changes in orbital planes and slow the spacecraft to commence re-entry. Both the RCS and the OBS use hypergolic fuels (they ignite spontaneously when mixed) of monomethyl hydrazine and nitrogen tetroxide.

The Orbiter uses rudder and elevons for control in the atmosphere and the RCS for control in space. During re-entry, the flight computer must make a subtle transition from RCS control to aerodynamic control while balancing the craft in the correct re-entry attitude.

Before lift-off the Orbiter is prepared for flight in the Orbiter Processing Facility (OPF) at Kennedy Space Centre near the Vehicle Assembly Building (VAB). When it's ready it's passed to the VAB for mating with the ET and SRBs on top of a Mobile Launch Platform.

The Space Shuttle Columbia (OV-102) launched from the Kennedy Space Centre on 12 April, 1981, marking a new era in space travel, with the use of reusable space vehicles, named 'Space Transportation System' by NASA. Previously, manned spaceflight had been limited to vast, expensive rockets which could only be used once. The Orbiter and its crew, Commander John W Young and Pilot Robert L Crippen, returned safely to Earth two days later, not needing to use the two ejections seats fitted for the first four flights and mission STS-1 was a success.

The first launch didn't go completely without incident, however. It was delayed after more than 150 heat shield tiles fell off during a test flight in 1979 and even when the Orbiter returned to Earth 16 heat shield tiles were lost and 148 damaged. In fact, NASA has had a lot of trouble with heat shields. During the early days of research the glue that held the tiles to the bottom of the Shuttle would not stick and the Space Shuttle Atlantis reportedly lost 175 heat shield tiles during a classified mission in 1988.

1As in dynamic soaring.2The orangey-brown tank that piggy-backs the Space Shuttle during lift-off. In the first few flights it was painted white for aesthetic reasons, but now the natural rusty orange colour of the ET, which is actually the insulation coating that helps to prevent the cryogenic fuels boiling off during loading, is left as the paint adds too much weight to the launch vehicle.3The contractors for the Orbiter were Rockwell International, formerly North American Rockwell, the company that had previously manufactured the Apollo spacecraft. The Solid Rocket Boosters are manufactured by Thiokol (now Morton Thiokol) and the External Tank by Martin Marrietta4Meaning it didn't actually fly, but was tested on the ground.5Nowadays used mostly for the construction of the International Space Station.6The bit we like to call the Shuttle.