Herculean Actors - the Mighty, the Muscular and... the Cowardly? Content from the guide to life, the universe and everything 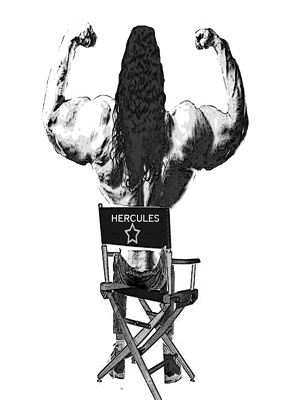 Heracles, (or Hercules, as he was known to the Romans1), is a character of Ancient Greek myth who epitomised a strong, muscular man. Legend has it that Heracles was conceived following the king of the gods Zeus' (Roman god Jupiter) extra-marital dalliance with a mortal woman called Alcmene. Many stories exist about the demi-god Heracles, his Labours and other adventures, including the fathering of over a hundred children! There's also the abounding hatred of Heracles by the goddess Hera, Zeus' sister-wife, to contend with. Such tales gave much scope to scriptwriters who used the character of Heracles to star in their sword-and-sandal epics. Some of the actors who portrayed Heracles were perfect for the role; others didn't slip into his sandals quite so easily. This is a definitive (but in no way complete) guide to who has played the part of Heracles, with some extra titbits of information about them.

Steve Reeves' credentials for playing Heracles could not have been greater; his bodybuilding titles included Mr America in 1947, Mr World in 1948 and Mr Universe in 1950. His torso measurements in his prime included a 52 inch chest and a 29 inch waist, which, along with his 18½ inch biceps, gave him an impressive physique. By no means the best actor of his generation, he completely encapsulated the gladiatorial look of the legendary demi-god. Although Reeves starred as Heracles twice, in Hercules Unchained and the Italian film Le fatiche di Ercole (The labours of Hercules), his amazing body earned him many more acting roles. He played mythical characters including Romulus, Goliath, Phillipides (the giant of Marathon) and Aeneas (Trojan demi-god), and the real-life pirate Henry Morgan. When his acting career was over, Reeves bred horses on his ranch in California, USA.

Italian-born Sergio Ciani took the appropriate stage name of Alan Steel during his sword-and-sandal film career, which included body-doubling for Steve Reeves. Some of the films his Heracles starred in are Samson, Hercules Against Rome, Samson and the Mighty Challenge and the wonderfully-evocative title Hercules Against the Moonmen. Ciani also played Biblical hero Samson in Hercules and the Black Pirates, Hercules and the Treasure of the Incas and Samson and the Slave Queen.

For the special effects-laden epic 1963 film Jason and the Argonauts, South African Nigel Green was cast as Heracles, no doubt thanks to his 6' 4" (1.93m) height and muscular frame. He portrayed the strongman character as a braggart who thought himself unbeatable, until, of course, someone much scrawnier came along and beat him using brains and skill. The bond of friendship that was formed after the demi-god got over his shock at being beaten in the discus throwing contest by Hylas proved pivotal to the story. The goddess Hera was helping Jason and the Argonauts, momentarily putting aside her hatred for Heracles. She warned Jason that only food and water should be taken off the Isle of Bronze, but Heracles disobeyed Jason's orders when he took a supersized golden pin, which he thought would make a great javelin. Unfortunately the pin was from a treasure store of the gods and it was being guarded by a giant bronze statue of Talos. The theft activated Talos, one of the many special effects created by stop-motion animator Ray Harryhausen, who set about trying to destroy the Argo and its crew. Hera told Jason how to defeat Talos, but when the statue lost its life-force and toppled, Hylas couldn't get out of the way quick enough and he was crushed to death. When Hylas didn't return to the ship, Heracles stayed behind on the Isle of Bronze, vowing to search for him until Hylas, or his body, was found. We don't know what happened to Heracles after this event as the crew of the Argo continued their quest for the Golden Fleece on the advice of the goddess Hera, who declared to Jason that Heracles' fate lay elsewhere.

Reg Park certainly had the build to play the ancient Greek hero of our imaginations; he won the title 'Mr Britain' in 1949 and 'Mr Universe' in 1951, 1958 and 1965. After portraying Heracles in several films in the early 1960s, he mentored Arnold Schwarzenegger in bodybuilding and prompted him to audition for the next Heracles film. Arnie once described Reg Park as being 'like a second father to me'.

Arnold Schwarzenegger's film debut was Hercules in New York (1969) – he was billed as Arnold Strong 'Mr Universe'. The plot revolved around the son of Zeus who, bored with his job of Gatekeeper of Mount Olympus, escapes to Earth to live it up a little in modern-day New York. Arnie's voice was dubbed but when the film was released on DVD, his own voice had been reinstated. Suffice to say this wasn't Arnie's greatest acting moment, although his bulging-muscles body more than made up for any thespian shortcomings. For Arnie, and us, the best was yet to come3.

Bodybuilder Lou Ferrigno was well-known for playing the part of the shirt-tearing, trouser-shredding, green-skinned Hulk in the TV series The Incredible Hulk which ran from 1977 to 1982. He must have seemed a shoo-in to play the beefcake demi-god in Hercules (1983) but his acting was mauled by critics. The film was so awful that it was nominated in the Golden Raspberry Awards (aka 'Razzies') for 'Worst Actor', 'Worst Picture', 'Worst Screenplay', 'Worst Supporting Actress' (Sybil Danning) and 'Worst New Star' categories. Ferrigno won the 'Worst New Star' Razzie, but that didn't prevent the making of the 1985 sequel The Adventures of Hercules II, with Ferrigno again cast in the lead role.

Although not the beefiest actor to portray the strongest man on Earth, Kevin Sorbo was certainly one of the most attractive, with his 6' 3" (1.9m) muscular frame, deep voice, long hair, tanned skin and poster-boy looks. Up until landing the role which made him a household name, Sorbo was modelling and taking bit-parts in films to pay the bills. His breakthrough came in 1994, when he was cast as Heracles in five TV movies. These proved so popular that Hercules: The Legendary Journeys TV series was commissioned with Sorbo at the helm. He learned martial arts so that he could perform most of the stunts himself and he also had a hand in directing some episodes. Sorbo played Heracles as a gentle giant with a big heart. The series ran from 1995 to 1999, during which time Sorbo met the actress Sam Jenkins, who would later become his wife. Sorbo guest-starred as Heracles in Xena: Warrior Princess in 1995 and 2000, and still voices the Heracles character in some video games up to the time of writing.

Child-actor Gosling was just 17 when he was cast as a youthful Heracles in the TV series Young Hercules (1998 - 1999). Although he was tall, Gosling was rather too slim to get away with being just a few years away from being the strongest man on Earth. This was a prequel though, and it was enjoyed by both kids and adults. The family-friendly fare spanned 49 episodes, which covered the time the teenage demi-god spent at a training academy for warriors run by Chiron the centaur.

Of all the actors playing Heracles, Mark Addy's interpretation must surely be the most controversial of all. In the opening episode of the BBC's Atlantis, not only is the famous lothario Heracles found living on Atlantis with geeky, triangle-obsessed Pythagoras, but he is also portrayed as a fat coward with a pronounced yellow streak of cowardice who runs from danger, desperate to save his own skin. Addy's Heracles is the only one to have romantic feelings for the character of Medusa, as far as we know, but this is set before she becomes a monster. The reasoning behind the BBC's deviation from the norm isn't clear, yet there are fans of the show who say Addy is the best part of it, and rave about his comedic turn as the quivering, quaking Heracles.

At the time of writing, two more actors have been signed up to play the role of Heracles in future films:

1For the purposes of this Entry, we will refer to the hero as Heracles, but keep the titles of the films and TV series as they appear at the Internet Movie Database. 2Also known as the 'Green Cross Code' man, and the body of Darth Vader.3In the Terminator Movies (1984).