From Spiral Nebulae to Galaxies Galore - The Great Debate of 1920 Content from the guide to life, the universe and everything 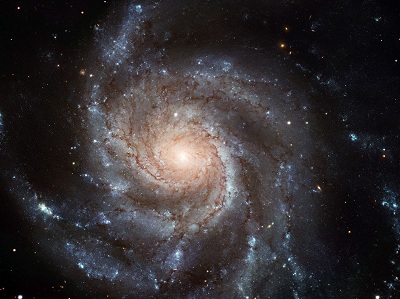 This entire globe, this star, not being subject to death, and dissolution and annihilation being impossible anywhere in Nature, from time to time renews itself by changing and altering all its parts. There is no absolute up or down, as Aristotle taught; no absolute position in space; but the position of a body is relative to that of other bodies. Everywhere there is incessant relative change in position throughout the Universe, and the observer is always at the centre of things.
–  Giordano Bruno: De la Causa, Principio, et Uno (On Cause, Principle, and Unity), 1584

Mankind has gazed at the night sky since time immemorial. Early civilisations watched the phases of the moon, the gradual procession of planets and the seasonal changes of the stars. Some cultures, like the ancient Egyptians, set calendars by these movements. Others built monuments aligned with celestial bodies. This was all happening long before optical aids like the telescope were invented, and people had to depend on naked-eye viewing. If you were alive then, the farthest thing you could see would have been what we now call the Andromeda Galaxy. Historically it was first mentioned in 965 AD as 'Little Cloud' by Arabic astronomer Al Sufi. It was designated a 'diffuse nebula' by French astronomer Charles Messier (1730 - 1817) and listed as number 31 in his famous catalogue of non-comets. Dubbed the 'Great Andromeda Nebula', it was given the designation NGC 224 by John Louis Emil Dreyer who was compiling the New General Catalogue in the late 19th Century. Even then it was thought that the Great Andromeda Nebula was a part of the Milky Way Galaxy, which filled the entire universe.

In more recent history, and with the progress of technology, more people began to believe that certain astronomical objects must be a lot further away than had previously been thought, and some even dared suggest that they were extragalactic. This opened up the possibility of there being other galaxies like our own. Although the thought of an enormous, perhaps infinite universe containing lots of galaxies was exciting and mind-boggling to some scientists and astronomers, there were still people who refused to believe such a notion. The vastness of the cosmos would equal further shrinkage in the importance of the Earth (ergo, humankind). It had already shrunk in status from what was once thought to be the centre of everything, Ptolemy's geocentrism, around which even the stars revolved. Now accepted as a mere third planet of eight in the Solar System with only its moon in attendance, to suggest that even our galaxy was just a veritable drop in the cosmic ocean was a step too far for some. To settle the verbal sparring, the astronomical community prepared to hold a debate and suitable candidates were sought.

Astronomer Heber Doust Curtis (1872 - 1942), working at Lick Observatory on the summit of Mount Hamilton near San José, California in the early 20th Century, observed novae (exploding stars) in the Great Andromeda Nebula. Checking data of previous novae, Curtis found that their magnitudes were vastly dimmer than they should have been, had they occurred within our own galaxy. He concluded that these novae must be much further away, and estimated a distance of half-a-million light years1 to this 'island universe' – another galaxy.

In the opposing camp were those who thought that what was being proposed – that the Milky Way was not the only galaxy – was preposterous. This included eminent scientists as well as religious communities. One of the astronomers who supported the 'single-galaxy universe' was Harlow Shapley (1885 - 1972) so he agreed to take part in a 'Great Debate' in 1920 to determine the matter once and for all. Shapley, however, had an ulterior motive for raising his profile: in attendance at the debate were representatives of the Harvard College Observatory. The post of director of the Observatory had been vacant since the death of Prof EC Pickering in 1919, and Shapley was hoping to be appointed Pickering's successor.

The Shapley-Curtis Debate took place on 26 April, 1920, at the Smithsonian Museum of Natural History. Supporting Curtis' side of the argument was Edwin Hubble (1889 - 1953). Around the time of the Great Debate, Hubble had been working on redshift and 'standard candle' stars – the Cepheid variables2  – in spiral nebulae. Hubble's observations lent weight to the theory of other galaxies. In the Shapley camp was Dutch astronomer Adriaan van Maanen, whose claim to fame was the discovery of the first solo white dwarf star which was eventually named after him. Van Maanen was convinced he had seen movement in Messier 101, the 'spiral nebula' in Ursa Major (now known as the Pinwheel Galaxy), and, as such, it must be part of the Milky Way.

Both camps provided 'evidence' to support their cause but neither Shapley nor Curtis would defer to the other. Shapley maintained that spiral nebulae were part of our own galaxy, and the Sun was not located anywhere important within it. Curtis maintained that the Milky Way was just one of many 'island universes' (galaxies), the same size as, if not bigger than, our own galaxy. He did, however, claim that the Sun was situated near the centre of our galaxy. The argument over who was right was not resolved until further work was undertaken – specifically the studies of Cepheid variable stars by Hubble.

Shapley was eventually proved correct in his theory about the size of the Milky Way and the Sun's position within it, but he was wrong about the single-galaxy universe. Curtis, on the other hand, was incorrect about where we are within the Milky Way and the distance to the Great Andromeda Nebula3, but he was spot on about the 'island universes'. Following the debate of 1920, Shapley was indeed appointed director of Harvard College Observatory, where he remained for 30 years. In retirement he wrote Liquid Water Belt, the precursor for what we know today as the Habitable Zone. Curtis took the post of director of the Astronomical Observatories of the University of Michigan, where he and his family lived in the Observatory residence at Ann Arbor. He died there in 1942, aged 69 years.

The renamed Andromeda Galaxy was first resolved into stars in 1944; we now know that it is much bigger than the Milky Way and about 2.5 million light years distant. M101, the Pinwheel Galaxy, also larger than our own galaxy, is over 20 million light years away. What would Edwin Hubble, after whom the Hubble Space Telescope has been named, have thought of such images? Or, indeed, what would any of the participants in the Great Debate of 1920 have made of the Hubble Ultra Deep Field, which shows galaxies from the dawn of time?

Image credit: European Space Agency and NASA
1A light year is the distance light travels in one year, roughly 5.88 trillion miles or 9.46 trillion km.2Delta Cephei, discovered to be variable by John Goodricke in 1784, is a prototype for what are now called Cepheid variable stars. The study of stars such as these helps astronomers determine distance.3By two million light years.