The Venus de Milo - Mostly Armless Content from the guide to life, the universe and everything 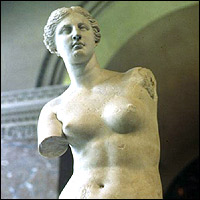 The Venus de Milo was sculpted in the 2nd Century BC as a depiction of the Greek goddess of love, Aphrodite1. She was lost to the world for centuries before she was unearthed and became possibly the most famous statue in the world.

In the Greek Aegean island of Melos2 a peasant farmer called Yorgos was working in his field. It was 1820, and at that time, the island was under Turkish occupation. He found the statue in a few pieces and decided that her beauty was too great to give to the authorities, as was the law, so he hid her in his barn.

Soon the authorities discovered his secret, and the Aphrodite of Melos was loaded onto a Turkish boat for shipping back to Turkey. However a French sailor, Jules Dumont d'Urville, secured her purchase and she was loaded onto a frigate for transporting to France.

After a bit of restoring, she was presented to King Louis XVIII in 1821. He donated her to the Louvre Museum in Paris where she has lived ever since.

After the fall of Napoleon, the French rather sheepishly had to give back all the works of art the Corsican general had stolen. One of these was the Venus de Medici; this was a Roman statue of the goddess acquired by the Medici family in the early 17th Century. It is a complete figure and had a worldwide reputation as one of the greatest ancient works of art. The French propaganda machine went into overdrive claiming how they now had a much greater treasure.

The Venus De Milo isn't just known for her beauty; to the masses, she is perhaps more famous for having no arms. When she was unearthed, she was in a number of pieces, but there were no arms. So what was she doing?

Some people believe that she was holding a mirror in one hand and a shield in the other. Others say that she is presenting an apple to Paris with which he would woo Helen 'not-yet-of Troy' and trigger the Trojan War. An apple was found along with some of the bits of statue and also Melos means apple in Greek.

King Louis XVIII originally asked eminent sculptors from around the land to make new arms, and people came back with hands pointing, holding apples or holding clothes. Louis decreed that no sculptor should tarnish her beauty, so she was left as found, a tradition that has been followed with other ancient treasures.

1Venus was the Roman name for the same goddess.2Also known as Milo.