The Common Lizard (UK) Content from the guide to life, the universe and everything 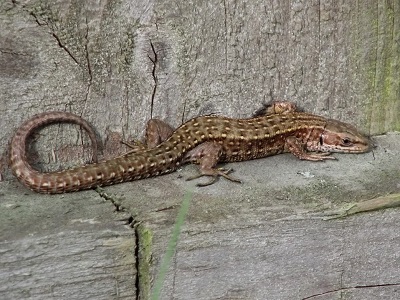 The common or viviparous lizards (Lacerta vivipara) are not as common as they used to be throughout the UK, mainly due to their natural habitat being used to build houses on. They used to be found in urban areas, but this is now rare. However they are widely spread over the British Isles and in a range of areas of central and northern Europe and are not considered to be an endangered species. Lizards are the only reptile native to Ireland.

The common lizard is a small reptile that has a long body with short legs and a long, tapering tail. They usually grow to between 10cm and 16cm (four inches and six inches), it can grow up to 18cm (seven inches). However, this can depend on whether it has its original full tail, which can make up half of its body length. There are slight differences between male and female; on the lizard's back are coarse scales of brown, bronze, grey or green which are usually darker in males, they also have a orange/yellow underside. Females have lighter scales and a cream/white underside. There are also white spots that fuse to form a line down the flanks, and a black line along the back in both genders.

The lizard, being a reptile and thus cold-blooded, is unable to control its own internal temperature, and is reliant on the weather conditions for controlling its routine and behaviour.

Lizards are only active between spring and autumn. In early spring lizards start to emerge from their hibernation, at first tending to spend a lot of time basking in the sun, making use of the shade during the mid-day heat, using their wide-spreading clawed toes to grip and climb up banks and over rocks. Lizards spend the night under rocks, stones or whatever cover is available.

As the weather gets warmer they use more shaded areas, until it cools again around September and October, when they revert back to basking in the sun. As autumn ends, they climb into cracks or under rocks or large stones to hibernate over winter.

Lizards have a transparent layer of skin, which they shed periodically. It is shed in pieces and the lizard aids this process by scraping itself on rough surfaces, thus giving the lizard a ragged look until its moulting is completed.

Lizards generally search for food when their body temperature reaches 30 degrees Celsius. The lizard's diet is made up of various insects, spiders, small earthworms and snails, all of which they grip in their jaws and stun by shaking, before swallowing them whole.

Lizards are at their most vulnerable when they are cold, as they tend to be sluggish and easy prey for predators. Their main predators are snakes, wild rodents and birds of prey including kestrels. The lizard's main defences are both the speed at which it can run and the ability to drop the lower part of its tail. Thus if the predator grabs the lizard by its tail, that is all it gets; a squirming tail that confuses the predator and allows the lizard to escape. A new tail will slowly grow. However the new tail, which takes around eight months to reach full size, will not grow as long as the original, and will have a stumpy end, rather than pointed. Occasionally the tail will not drop off completely, and a new tail grows, giving the lizard two tails. They are also in danger from foxes and, where they are prevalent in urban areas, from cats. As they are good swimmers, another option the lizards have is to dive underwater if it feels threatened.

During the breeding season, the male lizards establish their breeding territory and vigorously defend if from other males. Lizards court and mate in April to May, with an average of five to eight black babies being born in July to August. The baby lizards are born fully formed, inside a transparent capsule that usually breaks during birth, though sometimes after a few days. They can be born all at once, or over a day or two. The lizards are able to feed from birth, so they quickly separate and fend for themselves, as the mother shows no parental care. Males become sexually mature around two years and females around three years of age. A lizard's life span is around five to six years.