Earthworms Content from the guide to life, the universe and everything 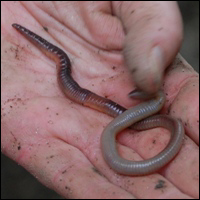 Worms are possibly some of the strangest looking creatures on the planet and due to this unfortunate fact they are largely regarded as 'gross' or 'unsavoury' company. However, they are actually pretty fascinating creatures, even if they do look slightly disgusting...

Worms belong to the Annelid family, along with leeches. There are actually quite a few types of worm, examples include:

A worm's body is made up of many segments called 'annuli'. Underneath these are longitudinal muscles that run the length of the worm's body. The muscles contract and relax, making the worm move. The annuli help out because they have tiny hairs attached to them, called 'setae'.

Worms don't breathe in the human sense, largely due to the fact that they have no lungs. They do need oxygen though, so they absorb it through tiny pores in their skin. They also have no eyes, no ears, and no nose1, so they can't see, hear or smell. Worms do, however, have light-detecting cells on their bodies that can detect harmful light conditions. Worms don't like strong light, and ultra-violet rays can kill them. The worm is also very sensitive to movement. Using this ability, they can sense things like rain or approaching creatures that may be a danger to them.

It's a common myth that if you cut a worm in half the two halves will grow into worms, leaving you with two worms instead of one. This is untrue. If a worm loses a small part of its body, it will live, but if you cut it in half it will almost certainly die. So please don't do it. It's not pleasant.

So How Do they Mate?

Earthworms are hermaphrodites, meaning that they have both male and female reproductive organs. Despite this, two worms have to mate to have eggs. The eggs are laid around the 'clitellum' (a couple of large annuli). When the worm moves, the cuff moves over the body and slides over the head, closing completely around the eggs to make a sack-like cocoon. After several weeks in the cocoon, the young earthworms hatch.

Worms feed on the remains of dead plants in the ground. They eat the soil as they tunnel, extracting their food from it. A worm's stomach is highly adapted to do this. Soil passes through two parts of a worm's body called the crop and the gizzard. Here, strong muscles grind the soil, and digestive juices turn the plant matter into a digestible form. This is then passed into the worm's intestine where the nutrients that are needed are absorbed by the worm. Anything unwanted is passed out of the back end in the form of a worm cast. You may well have seen worm casts on grass or soil. They look like very small, curled up worms made out of mud.

Worms also eat leaves and other plant remains from the surface. They pull them down into their burrows to eat in safety.

So there you have it. Worms: weird, strange looking slimy things that are actually quite interesting. Aren't they great?

1Don't even think of asking how they smell - that joke just isn't funny.