Rocks, Stones and Pebbles Content from the guide to life, the universe and everything 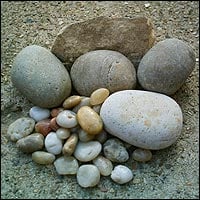 You all know what a rock is. It's a giant collection of atoms that form a very solid mass. Rocks can come in a variety of colours, the most common being grey. Even the grey ones have various shades and streaks of grey and white, so no two rocks ever look exactly the same in nature.

Stones are a smaller variety of rocks, and they are usually around the size of your hand. Pebbles are the very tiny ones that primary school children have been known to throw at each other.

You can also get boulders which are absolutely massive. There are gemstones too, which are highly prized for beauty, durability, and rarity.

Rocks can also come from outer space. You have asteroids, which float around in space, and you have meteorites, which are rocks that land on earth from space. Comets are massive chunks of rocks covered in ice. The most famous is Halley's Comet.

Some people collect these rocks and this is not as silly as you may think. Stones and the like can come in a range of natural shapes and colours and can look surprisingly more interesting than your conventional stone. The study of rocks is called geology.

Rocks have many uses. You can...

We do not recommend that they are used to perpetrate acts of violence. You may be interested in keeping a rock or two in case you need to do any of the above. It goes without saying that they can be rather heavy, so pick a light one.

Uluru1 is a gigantic sandstone monolith in the Australian Outback, near Alice Springs. It is sacred to the Aborigines, who have made paintings of ancestral beings forming the Rock's features.

Stonehenge is a massive stone circle started in circa 2200BC and finished in circa 1600BC. The reason why it was built is unknown2, but Druids find special religious meaning in it. During the total eclipse in August 1999 many of them travelled there for celebrations. They also have special permission from the Heritage Trust to hold their Spring Solstice rite at Stonehenge.

Newspaper Rock, Moab, Utah, USA is a sandstone cliff on which is inscribed hundreds of native American petroglyphs (carved images) in the stone.

Chimney Rock in south east Utah is often seen in TV commercials and movies (ie Forrest Gump, while he was on his running spree).

The Rosetta Stone proved to be the crucial step in translating Egyptian hieroglyphs. It is now housed in the British Museum.

Plymouth Rock is the stepping stone that the Mayflower pilgrims supposedly stepped on to reach land in the USA.

1Formerly Ayers Rock.2Possible explanations suggest it may have been for religious ceremonies or a giant sundial, but we can never really be exactly sure.