Indiana Jones - the Original Trilogy of Films Content from the guide to life, the universe and everything 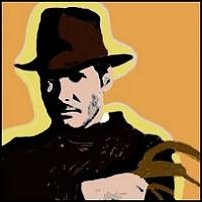 One of the many ideas fermented by the amazing George Lucas1, Indiana Jones was formed after Lucas and Steven Spielberg combined as producer and director respectively, after Spielberg admitted that he wanted to do a light-hearted action adventure, similar to the James Bond films2. The films were a loving pastiche of the old Saturday-morning Boys' Own adventure stories, and each one was scripted, in the style of the original series, to contain an element of theological significance.

Spielberg and Lucas originally wanted to cast Tom Selleck as the whip-wielding archaeologist of the title role, but he pulled out as he was contracted to a TV show, Magnum PI.

After seeing Harrison Ford in Lucas' film, The Empire Strikes Back, Spielberg cast him in the title role, later admitting that he couldn't think of anyone better to take on the role. Indiana Jones was the role that shot Harrison Ford to fame; along with Star Wars, it made him the world's number one box-office draw for much of the 1980s.

The ark in question is the fabled Lost Ark of the Covenant, the supposed resting place of the tablets containing the original Ten Commandments. Our hero is called away from liberating artefacts in the Peruvian jungle, as the US Government have learnt of the Nazis' discovery of the chamber that tells the whereabouts of the Ark in Egypt. After Indy (as he is often called) regains the headpiece of the Staff of Ra (which indicates the location of the Ark) from ex-girlfriend Marion3 in Nepal, he sets course for Egypt on a mission to find and protect the Ark.

The film produced several memorable scenes, notably the fight beneath the aeroplane and subsequent lorry-chase4. Most people also remember fondly the chase through the Egyptian bazaar, culminating in Indy's encounter with a sword-wielding man-mountain. Thoroughly unimpressed by the showmanship, Indy simply draws a pistol and shoots him, in a moment that - although re-written at the last moment in order to shift the crew out of Morocco5 - has become a cinema classic.

No less a classic is the opening sequence where the pillaging Dr Jones encounters all manner of traps while heisting a precious stone. The 'rolling boulder' sequence, although in fact derivative of a 1950s 'Disney Ducks' cartoon, became the stuff of legend, attracting countless imitations.

Accompanied by young, wise-cracking assistant, Short Round (Ke Huy Quan) and night-club songbird Willie Scott (Kate Capshaw), Indiana escapes drug smugglers in Shanghai via plane, only to be brought down in a remote Indian village. They are sent on a quest to find the legendary Sancara Stones, and free the thousands of children enslaved in the fortress-like mine by the reinstated Thuggee cult.

The darkest of the trilogy, but reckoned by most to be the weakest, this was strictly speaking a prequel to Raiders, and intended to give an insight into Indy's character. Whether it succeeded or not is a moot point, but the film did give us that most memorable of scenes, the underground mining-car chase, which naturally became a cgi-enhanced ride at Florida's Universal Studios.

Indiana Jones and the Last Crusade (1989)

This time, Indiana Jones is sent to find his kidnapped father (Sean Connery), and the pair inadvertently start a race against time to find the Holy Grail before the Nazis do.

Played very much for laughs, the film was hugely successful - as one would expect from any film co-starring Ford and Connery. Connery's appearance also completes the circle of James Bond inspiring the Indiana Jones films. In real life, Connery is just 12 years older than his screen 'son'.

The film draws some interesting contrasts between Joneses Senior and Junior. Philandering seems to be a prominent theme, as are some common phobias (we know Indiana is scared of snakes - his father is petrified of rats). In addition many of Jones' characteristics, such as his whip, his hat, his fear of snakes and the distinctive scar on his chin6 are explained by the opening scene, featuring River Phoenix as a 15-year-old Indy. This scene later went on to inspire a television spin-off series.

The film's memorable moments include a marathon tank-chase and Indiana finally coming face-to-face with Hitler, although actor Michael Sheard7 must have been having an off-day; in a superb movie blunder, the famously left-handed Hitler writes his signature right-handed, and misspells his first name as 'Adolph'.

1The man behind some of the most famous movies in history, including the Star Wars films.2Film nerds will have noted that the directorial style of the three films is very much derived from the older Sean Connery James Bond films, directed by Terence Young.3Played by Karen Allen.4Harrison Ford, rather than use a stuntman, performed the scene where he was dragged beneath the lorry himself. When asked if he thought it was dangerous, he replied 'No. If it really was dangerous, they would have filmed more of the movie first.'5Film lore also has it that another reason for the rewrite was Ford's ill health - a bad dose of diarrhoea that made it uncomfortable to perform a longer fight sequence as scripted.6This scar was actually acquired by Ford in a car accident when he was 20.7Sheard, whose most famous role is that of Mr Bronson, the fearsome schoolteacher in Grange Hill, seems to specialise in playing important Nazis - in addition to playing Hitler more than once, he has also played Goering and Himmler on film.8When something is past its best and tries to do something amazing, which ends up just being absurd, in reference to when the Fonze tried to jump over a shark on water skis in an episode of the TV series Happy Days.