Harrison Ford - Actor Content from the guide to life, the universe and everything 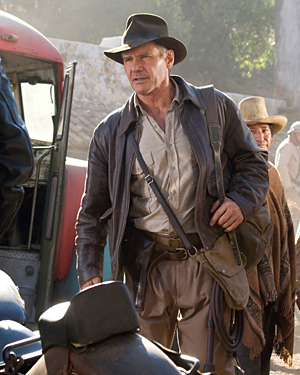 In 1998 Harrison Ford was voted 'Sexiest Man Alive' by People Magazine. However, if you mentioned that embarrassing fact to him he would more than likely crack his whip at you. The world has been warned.

Harrison Ford was born in Chicago, Illinois, on 13 July, 1942, the son of an Irish father and a Russian mother. Throughout his childhood he wanted to be an actor; he later dropped out of college to pursue his dream. He signed a Hollywood contract with Columbia Movies, but became dissatisfied after landing relatively small parts and changed direction, training to become a professional woodworker. No doubt he would have made a career in carpentry, as this was something he became an expert in1. Nowadays, woodwork is more of a hobby for him, rather than a means to earn a living, thanks to his friend George Lucas.

Ford was already into his thirties and a family man when director George Lucas offered him $500 a week to act in American Graffiti. The pair became firm friends and Ford was first consideration for the part of Han Solo in the ambitious Star Wars project a few years later. This time Ford demanded $750,000 for his salary but settled for $650,000. His onscreen persona was magnetic and his good looks didn't hurt; ideal leading man material in a perfectly-packaged nutshell. At 6ft1in Ford towered above his Star Wars co-star Carrie Fisher2, but the problem of equalling the pair's height so they'd share the screen was solved when he built her a box to stand on. More importantly, it was a lot more comfortable kissing her when they were almost on a level. The part of Han Solo shot Ford into the realm of Hollywood A-listers, ultimately being voted the sixth-best film hero in a fan poll.

Whip-cracking archaeologist Indiana Jones (Dr Henry Jones Jr) was a mega-success for Ford. Ford has a distinctive scar on his chin, although he can't remember how he got it. The script of Indiana Jones and the Last Crusade (1989) opens with (an unscarred) River Phoenix (1970-93) playing the young Indy. He suffers a cut chin from a whip he uses for the first time while trying to keep a lion at bay in a circus train carriage.

In Apocalypse Now, Ford's character's name tag was 'G Lucas'. Bladerunner was filmed between the Raiders and Temple of Doom outings for Indiana Jones. It holds a very high cult status in regard to science-fiction and special effects. In the 1990s Ford played the part of President of the USA James Marshall in Air Force One. Ford also revived the character of the CIA Analyst Jack Ryan3 he portrayed in Patriot Games in Clear and Present Danger. The films Ford has starred in have grossed over six billion dollars worldwide and at one time no less than six of them (the first three Indiana Jones movies and the original Star Wars trilogy) were in the top ten highest grossing films worldwide.

Of course, not every film can be a success, even ones with A-listers like Ford can bomb if the script isn't up to scratch. Take for example the 2002 K19: the Widowmaker, for which Ford was paid $25m to fake a Russian accent.

In 2008, after a gap of 20 years, Ford reprised his Indiana Jones character to play the lead role in Indiana Jones and the Kingdom of the Crystal Skull, working again with producer Lucas and director Steven Spielberg. It received only lukewarm reviews but the fans loved it. They are the ones who matter and it was a box-office smash, taking approximately $800m4.

Ford is a passionate Friend of Tibet. After he made a speech to a US Senate sub-committee about the Chinese occupation of Tibet on behalf of the people of Tibet, he was barred from entering Tibet by the Chinese government.

Ford is vice-chairman of Conservation International, and highly passionate about the cause. Newly-discovered animal species, like the spider Calponia harrisonfordi, and the ant Pheidole harrisonfordi, have been named in his honour. Ford is a qualified pilot and volunteers his time for Riverkeeper, patrolling the Hudson River in his own helicopter on the lookout for illegal dumping. For this work Ford was presented with the Lindbergh Award in 2002.

In 2004 Ford became Honourary Chairman of Young Eagles, a charity set up to offer disadvantaged children a chance to fly at no cost with volunteer pilots (including himself). Something else he supports is the Indianapolis Prize, a much-coveted award in animal conservation circles.

One of the wonderful things about aviation is that freedom and responsibility are great things for kids to be exposed to. To be able to see the world in a three-dimensional way, and to give them a sense of the possibility that they might enjoy that freedom themselves, if they work for it.
– Harrison Ford in an interview about his role as a volunteer pilot

Ford has been recognised for his conservation and charity work from various renowned establishments:

Ford was married to Mary Marquardt for 15 years, and they have two sons, Benjamin and Willard. The couple divorced in 1979. With second wife Melissa Mathison, a screenwriter, whom he met on the set of the film Apocalypse Now in 1979, he has two more grown-up children, Malcolm and Georgia. Ford and Mary have two grandsons and a granddaughter.

After his split from Mathison, Ford dated actress Lara Flynn Boyle, star of TV legal drama The Practice. Then he met Ally McBeal star Calista Flockhart at the Golden Globes ceremony in 2002, and since then the two have been together. He describes her as 'the best Mom in the world' to her adopted son Liam, who was born in 2001. The family chose to holiday aboard a canal boat in north Wales in 2004. They stayed overnight in a hotel and staff spoke highly of their surprise Hollywood guests. Clearly late parenthood suits Ford, as he uncharacteristically gushed:

It's a wonderful opportunity to be part of a child's growing up, which is always an endless springtime. You see the blossoming and the growing and the nurturing and the payoff.

In 2009 Ford directed and starred in the film Extraordinary Measures, also starring Brendan Fraser. The moving tale was based on a true story about a desperate father (Fraser) of two very ill children who tracks down a doctor (Ford) researching a cure for their particular disease.

Ford said he would not contemplate marriage again after the $100m divorce settlement with second wife Mathison. However, time has obviously tempered his anti-marriage stance, with Ford proposing to his partner Calista around Valentine's Day 2007. They married without fanfare at the Governor's mansion in Santa Fe, New Mexico, on 15 June, 2010.

1Ford is a master carpenter - he built his own house in Jackson Hole, Wyoming, on an 800-acre spread.2She is 5ft1in.3Jack Ryan was originally played by Alec Baldwin in The Hunt for Red October.4Only one other film of 2008 fared better - The Dark Knight - for which Heath Ledger (1979-2008) as The Joker won a posthumous Oscar at the Academy Awards ceremony in 2009 for Best Performance by an Actor in a Supporting Role.5There was a star on the Walk of Fame bearing the name 'Harrison Ford' which Ford spotted before he was a star himself. It belonged to silent screen star Harrison Ford (1884-1957).