Santa Fe, New Mexico, USA Content from the guide to life, the universe and everything 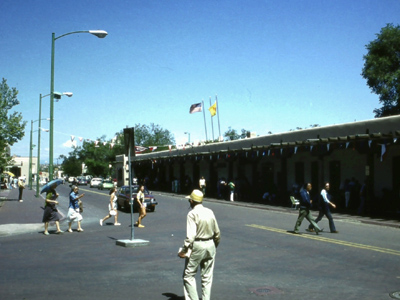 Santa Fe, or 'City Different' as it is affectionately known, is an enchanting tourist destination and a friendly place to live. Here is some information that will make your sojourn there more pleasant.

Santa Fe is located in the centre of northern New Mexico, in the foothills of the Sangre de Cristo Mountains, which are a southern extension of the Rockies. Santa Fe sits at a height of around 2100m (7000ft), which takes a couple of days to get used to if you're coming in from sea level. Water boils at this elevation at a tepid 93°C (200°F), so adjust your cooking times accordingly.

The climate in Santa Fe is basically high desert. There is very little humidity and the nights are fairly cool. Highs in the summer reach 38°C (100°F), and lows in the winter drop to around -10°C (15°F). There is some snow from December through April, and the monsoon season brings heavy rains in July and August, if it brings them at all. Droughts are common; it is a desert. Remember to drink lots of water, as it is very easy to dehydrate.

Santa Fe, and in fact, all of Northern New Mexico and the whole Four Corners1 area in general, is wonderful to look at. Sunsets occupy the entire sky and can include every colour from turquoise to copper, from lavender to brown. The Sangre de Cristo mountains are lovely in any season, and if you drive up Hyde Park Road to the Santa Fe Ski Basin in the beginning of October, you can see the aspen (poplar trees) changing colours. Nice Sunday drives out of the city on county roads abound; Highway 14 down to Cerrillos and Madrid is a popular favourite.

About an hour's drive to the north is Taos, to the Southwest Albuquerque, and to the Northeast Las Vegas (no, not that Las Vegas).

The area around Santa Fe was inhabited by Pueblo Indians for a long time. Then the Spaniards arrived, bringing Catholicism, disease, and firewater: in short, Western civilization. Don Francisco Vasques de Coronado claimed 'The Kingdom of New Mexico' in the name of Spain in 1540. Don Pedro de Peralta was Governor of New Mexico and set up his capitol at Santa Fe, which he called La Villa Real de la Santa Fe de San Francisco de Asis ('The Royal City of the Holy Faith of Saint Francis of Asisi') in 1610. This is still the official name of the city, but nobody uses it. The Pueblo Indians didn't like being subjugated, so they drove the Spaniards out in 1680, but the Spaniards, under Don Diego de Vargas, drove back by 1692, and things settled down for a while.

In 1821, Mexico won its independence from Spain, and then the USA acquired the south-west from Mexico (1848). Santa Fe was part of the Wild West when there was such a place. For some reason, there was a civil war battle over Santa Fe ('Glorietta, the Gettysburg of the West' - an ironic name at best) in 1880. Then the railroads arrived, and the Atchison, Topeka and Santa Fe line terminated there. These are the grandfathers of all the boxcars with the words 'Santa Fe' painted on them that you can still see rolling around.

New Mexico became a state in the last century (1912), and Santa Fe remained its capital, but a lot of people on the east coast remain unaware of this development, and consider New Mexico an international destination. Those who have actually travelled to Santa Fe are frequently delighted at how quaint and old-fashioned looking it is; so there are laws to keep it that way. Thus, Santa Fe is still made of small adobe buildings, and tourists journey there to walk around in cowboy hats and leather jackets with a 'fringe'.

Santa Fe's population consists of white people with money, Hispanic people without much money, and Native Americans without much money. For the traveller, this means some nice art on the east side of town (Canyon Road galleries), and some good, inexpensive New Mexican food on southside and westside. If you like people-watching, you can find a very good supply of freaks in Santa Fe.

A warning about driving in Santa Fe - be careful! If it is not a majority of drivers that are drunk, high, or schizophrenic, it's very close. Four-way stop signs operate in Santa Fe according to a set of rules that defies codification (summary, if it seems safe, shut your eyes and go). Turn signal use is the exception rather than the rule, and the roads are difficult to navigate. Parallels behave in a way that would make Lobachevsky weep. Maps don't help much. Santa Fe was 'planned' according to the system of throwing a bunch of concrete into the air and putting random road signs where it landed (well, OK, they just paved the horse trails, but the result is the same). Every major street in the town but one changes names as you drive along it. Highlights include the street with nine names (the best known of which is Paseo de Peralta), the intersection of Camino Entrada and Camino Entrada (same street), and the stretch of Osage where it crosses four other streets named Osage (all different). Remember, just don't panic.

There are City Buses, which run every day but Sunday, and often on time.

Oh, there's the Santa Fe Rodeo, the Georgia O'Keefe Museum, various other museums and the Historic Plaza downtown with Indians selling jewellery on blankets. There is also the Fiesta in August/September, which celebrates the Spanish reconquest, and so on and so forth.

There are the usual elementary, middle and secondary schools, and a couple colleges of interest. St John's College is an interesting Liberal Arts school where kids read classic works of Western thought written by dead white men. The College of Santa Fe is a more 'artsy' liberal arts school where you can go to study theatre, film, photography, visual arts, but not Mathematics. In addition, there is the International Institute of Chinese Medicine, which is exactly what it claims to be, and the Santa Fe Institute which is a think tank where people who can construct and solve systems of partial differential equations in their sleep use powerful computers to model ant colonies, stock markets, the evolution of biological life, and other things that God never intended for man to understand.

Several attractions are listed under the Culture header above. In addition, there are many attractions for 'outdoorsy' types. The Santa Fe Ski Basin usually gets a decent amount of snow and you can downhill ski and snowboard there. There's a lot of great hiking too, for example the 9km (5.5 mile) trail up Mount Atalaya, which begins on the campus of St John's College. Mountain biking is a popular option. Not far from town are Native American Pueblos, which you can tour on a bus which will pick you up and drop you off in downtown Santa Fe. A little bit of driving can get you to Jemez Hot Springs, Diablo Canyon, or Bandelier National Monument.

Governor Gary Johnson recently vetoed a bill which would have made 'Red or Green?' the Official State Question. 'A waste of paper,' he called it. The question refers to the chile, which is served on everything from pancakes to cheese steaks. It is most highly recommended that you eat it, however, on genuine New Mexican food. Nicer places include Tomasita's on Guadalupe, Maria's on Cordova, and the Blue Corn Café, with two locations, on Rodeo Road and downtown. Drink Margaritas at Maria's (they have a list of about 150), and at the Blue Corn, try their own brew, or else the Tequila Diablo. This is a Long Island Iced Tea, too much tequila and something that makes it bright pink. Have a couple. Cheers. Did you notice that the altitude lowers your tolerance? Mind covering my tab, too?

The very best green chile in town can be had at the Horseman's Haven, way down Cerrillos Road. It can be described as a 'greasy spoon' and 'the best food for your money in town'. Have a green chile cheeseburger, the carne adovada, or a breakfast burrito, and love it. There's no alcohol, but you can still smoke inside because it's out of the city limits.

Other types of food and recommended places to eat them:

And of Course there are the Santa Fe Breweries.

After all that, you'll need to crash somewhere. There are plenty of motels and they're fine. The El Rey Inn on Cerrillos Road, for one, is a great, clean, moderately priced motel. Travellers, however, would do well to check out the accommodation for young people on Cerrillos Road, called Santa Fe International Hostel, where you can stay for around $15. Anyone with less money than that can obtain free room and board at the Santa Fe County Jail, run by Cornell Corrections . This is not recommended as the food, although free, is gross, and a criminal record is not the best souvenir to take with you from this beautiful town. You'll find better free lodging at the St Vincent De Paul Shelter, but they won't give you a bed if you seem very drunk.

1'Four Corners' is the name of the place where Arizona, Utah, Colorado and New Mexico meet, and the surrounding region.