Bushisms: the Wisdom of George W Bush Content from the guide to life, the universe and everything 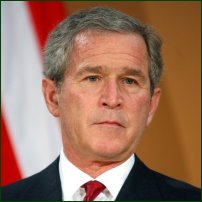 George W Bush, the 43rd President of the United States of America, started his presidency in 2000 ominously after winning the closest and most controversial election in US history. 'Dubya'1, as the president became known, took the oath in early 2001 and has rapidly become one of the most controversial presidents in recent years, but perhaps for his opponents and critics also one of the funniest. Mr President2 has put his foot in his mouth publicly so often he has surpassed Prince Philip as the master of the gaffe, so much so that columnists have created a new word to describe one of his errors - a 'Bushism'.

Then you wake up at the high school level and find out that the illiteracy level of our children are appalling. — 23 January, 2004

Quoting Bushisms has now become so popular that there are websites and books dedicated entirely to them, some of which log new quotes almost every day. Most of his quotes are harmless, some are deeply funny and some have actually caused serious effects, but all have the power to make the reader or listener stop, think and perhaps laugh. It's about time we provided the gentle reader with a collection of some of his better Bushisms, but remember while reading this that the President of the United States is probably the most influential man on earth!

See, in my line of work you got to keep repeating things over and over and over again for the truth to sink in, to kind of catapult the propaganda. - 24 May, 2005

As the man in charge of a nation struck by one of the most horrific terrorist atrocities the world has ever known, Bush was ideally placed to prove himself a strong and heroic leader. He could have easily become a hero of his nation and at first his popularity was sky high. However, before he could go down in history as one of his nation's greatest ever Presidents he instigated the controversial invasions of Afghanistan in October 2001 and Iraq in March 2003 which caused his popularity to slip. Bush then declared a War on Terror which has generated hundreds of speeches and subsequently many Bushisms.

I couldn't imagine somebody like Osama bin Laden understanding the joy of Hanukkah. - 10 December, 2001

Perhaps, because Bin Laden is violently opposed to Israel and the Jewish nation, Bush is right in guessing that he wouldn’t enjoy the lighting of the White House Menorah for the Jewish holiday of light. And then there was this gem - perhaps if Saddam was just frightening himself then George should have left him alone:

Our enemies are innovative and resourceful, and so are we. They never stop thinking about new ways to harm our country and our people, and neither do we. - 6 September, 2004

Makes you worry a little for our American colleagues here on h2g2 doesn't it? Especially as it seems the nation has become committed to a doomed mission - when the Today show asked the President if he thought the War on Terror was winnable he replied:

My trip to Asia begins here in Japan for an important reason. It begins here because for a century and-a-half now, America and Japan have formed one of the great and enduring alliances of modern times. From that alliance has come an era of peace in the Pacific. - 18 February, 2002

All very nice and friendly, but somehow Bush has managed to forget that somewhere in the middle of that century and-a-half the American nation and the Japanese nation fought a bloody little conflict called World War II. Not content with brushing over the contributions of a million servicemen, Bush went on to cause trouble with the Japanese economy.

He3 said I want to make it very clear to you exactly what I intend to do and he talked about non-performing loans, the devaluation issue and regulatory reform and he placed equal emphasis on all three. - 18 February, 2002

Bush had meant to say 'the deflation issue' rather than 'the devaluation issue,' but of course, by mentioning devaluing the Japanese currency, the stock exchanges of the world went haywire. This had the obvious effect of causing the value of the Japanese Yen to tumble in Tokyo.

Tongue-tied and Twisted Just an Earthbound misfit, I

We've all done it; got up on a stage or platform to do a speech in front of an audience and ended up tongue-tied. Most of the time we can stumble on and hope we don't come out of it too embarrassed. Unfortunately for Dubya his stage is in front of six billion people and a lot of those people are hard-nosed cynical journalists ready to jump on his every mistake.

Then again perhaps things in Mr Bush's life are not quite as earthbound as it seems. It would seem that nobody has bothered to explain to him that ticket-counters are generally not known for their aerodynamic properties:

I am here to make an announcement that this Thursday, ticket-counters and airplanes will fly out of Ronald Reagan Airport.- 3 October, 2001

Running in the Family

We may just be being a little hard on George, as it appears that his mother Barbara Bush also has a tendency to make the odd Bushism:

What I'm hearing which is sort of scary is that they all want to stay in Texas. Everybody is so overwhelmed by the hospitality. And so many of the people in the arena here, you know, were underprivileged anyway, so this, this is working very well for them. — George W's mum Barbara Bush, on evacuees staying at the Houston Astrodome. - 5 September, 2005

At least Bush does appear to have a sense of humour and can laugh at himself; he even did a small comedy routine during a speech in which he quoted some of his own favourite mistakes! In the end perhaps we are being a bit mean-spirited to laugh at the man, after all we may even have simply misjudged him. It could well be that Dubya just has a deeper connection to Gaia and the lifeforces of this planet than the rest of us. After all, this eco-friendly message for universal hominid/piscine relations might just have some deeper meaning:

I know that human beings and fish can coexist peacefully.- 29th September, 2000

1As in George 'W' Bush, to distinguish him from his father George 'HW' Bush, the 41st President of the USA.2He is often accused of not being the sharpest knife in the drawer.3The Japanese Prime Minister Junichiro Koizumi.