Prince William - the First 20 Years Content from the guide to life, the universe and everything 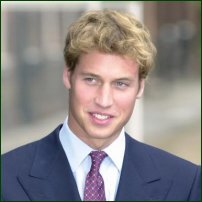 HRH Prince William Arthur Philip Louis Windsor was born following 17 hours of labour, at just after 9pm on Sunday, 21 June, 1982, at St Mary's Hospital, Paddington. He tipped the scales at 7lb 1½oz. Much celebration accompanied his arrival: as the first-born son of the heir to the throne of Great Britain, he is next in line to inherit the throne. For William's parents, Charles, Prince of Wales and Princess Diana, the healthy birth was much rejoiced.

Prince Charles caused quite a stir when he asked his long-time friend, the controversial American ex-Russian spy Armand Hammer (1898 - 1990), who was then well into his eighties, to be one of William's godparents. His other godparents are: the London-based ex-King Constantine; Lord Romsey (grandson of the late Earl Mountbatten); Princess Alexandra; The Duchess of Westminster; Sir Laurens van der Post and Lady Susan Hussey.

During a tour of Australia, Princess Diana insisted that they take the infant William (rather than following the Royal protocol of leaving him at home with a nanny), guaranteeing the tour was a resounding success. Prince Charles and Princess Diana agreed to be interviewed on a radio phone-in programme for the benefit of the people living in remote parts of Australia. They were very relaxed and laughed good-humouredly at the simplicity of some of the questions, for example: 'What is Prince William's favourite bath toy?' Both of them knew the answer1, and it was Prince Charles who answered the child's question, showing the whole world that he was a 'hands-on' father. The Australian population were delighted by the Royal couple and the adorable blond-haired, blue-eyed inquisitive toddler whom they had nicknamed 'Willy Wombat', and the hugely popular visit set the anti-Royal brigade back ten years.

William was eight years old when he was sent to school in Wokingham, Berkshire, and at 13 he moved to Eton, where he later passed 12 GCSEs and gained quite a reputation as a sportsman. He excelled at rugby and became quite proficient on horseback. Later, he joined his father's polo team.

William's younger brother Prince Henry (known as Harry) of Wales was born on 15 September, 1984. The brothers are extremely close and share many hobbies and a love of sport, most notably polo (which they played with their father) and rugby (which Charles watched).

The marriage between their parents irretrievably broke down, and Prince Charles and Princess Diana's separation was announced by Prime Minister John Major in Parliament in 1992. The couple divorced in 1996.

In June 1997 at William's suggestion, Diana put up for auction 79 of her most famous dresses at Christie's auction house on Park Avenue. Diana didn't think there would be 'much interest' in her designer hand-me-downs; evidently her son thought differently.

Christie's officials placed a minimum starting bid of $5,000 on each dress, but the lowest winning bid of the sale was $19,000. Over 80% of buyers were Americans; a mere 11% were Europeans. The event was a huge success, raising $5million (over £2.5million) for: AIDS charities in Great Britain; the Royal Marsden Hospital for cancer patients in London, and several US charities. The 500 auction programmes, personally signed by Diana, which contained photographs of her wearing the outfits, raised a further £250,000 for her charities.

On 31 August, 1997, in Paris, France, Princess Diana was killed in a car crash. Prince Charles flew to Paris with Diana's two sisters Sarah and Jane, to bring her body back to London for burial. He took with him the royal standard to drape over her coffin, acknowledging in death her status as a member of the Royal Family, even though she had been stripped of her title 'HRH' by The Queen the previous year as part of the divorce. William has stated his intention to reinstate his mother's title as soon as he is king. He was aged 15 at the time of his mother's death and he walked behind his mother's coffin from The Mall to Westminster Abbey, accompanied by his grandfather Prince Philip the Duke of Edinburgh, uncle the Earl Spencer, father Prince Charles and brother Prince Harry.

By the time he was in his mid-teens, William was already an international heart-throb. He has inherited height from his mother's side of the family and is very much like his uncle Charles (the current Earl Spencer) in looks. At 16, William visited Canada where he was mobbed by hordes of screaming girls. His shy demeanour and bashfulness merely accentuated his appeal.

Around the same time, William performed his first2 duty as godparent at the Christening of Konstantine Alexios (born 29 October, 1998), the son of Crown Prince and Crown Princess Pavlos of Greece. In a traditional Greek Orthodox ceremony, each godparent carries the child for a walk around the font3. William managed this important part of the ceremony even though his left arm was set in plaster due to an operation on a broken finger4 the previous week.

When his first waxwork model appeared at Madame Tussauds, it had to be assigned its own security guard due to the interest and excitement of the visitors. Within a week of appearing, the likeness had overtaken Brad Pitt's model in the 'most groped' stakes; and umpteen ties had to be replaced thanks to souvenir-hunters.

William passed his A-Level exams in Geography at grade A, History of Art at grade B, and a grade C in Biology. He took a gap-year, during which he spent time in the jungle in Belize, did a Raleigh International expedition in Chile, spent three months in Kenya working at the 50,000-acre Lewa Wildlife Conservancy and took part in exercises with the Welsh Guards. He began a History of Art degree at St Andrew's University in Scotland, switched to Geography in his second year and achieved a 2:1 honours in his MA degree.

William had a close circle of friends, but it was soon obvious that one of them was 'leaking' stories about him to the press. To dig out the bad apple, he told each of his 'trusted' friends a different false but newsworthy story about himself and waited for the next headlines. The story which appeared was about William stating he was going to join the Armed Forces before he was 20 and would take on no Royal duties until he was 30 years old. The culprit had revealed himself to the prince, and he was immediately dropped from the circle, persona non grata.

1It was a rubber duck.2It's likely to be the first of many similar requests; his father Prince Charles has over 30 godchildren.3A representation of a sacred dance.4He had fractured his left index finger playing rugby at Eton in December, 1998, but it had not healed properly, and had to be pinned back into position. Metal pins and wires were inserted into the hand to stabilise it.