William Shakespeare - Who Was He? Content from the guide to life, the universe and everything 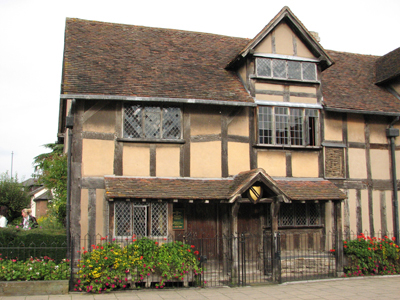 Shakespeare is widely considered to be the greatest writer ever, and despite this reputation actually turns out to be quite good. He was a playwright who lived in England from 1564 to 1616.

His reputation is bolstered because we actually know very little about him, so there's very little to get in the way of all sorts of interesting theories about his plays. The documentation shows he was born in Stratford, moved to London, wrote 37 plays, a handful of verse poems, a bunch of sonnets, returned to Stratford and died. And that's just about everything that is known for definite.

Who Really was Shakespeare?

The limited handful of known facts about Shakespeare has led to some of the most amazing theories. Various people have claimed that Shakespeare was black, Jewish, female, homosexual, Catholic, Francis Bacon, the Queen of England, and the Earl of Oxford, although very rarely all at the same time. They point to hints in Shakespeare's writings to defend these claims, a practice not unlike reading tea leaves but without the solid scientific basis1.

The main candidate for authorship is the Philosopher Sir Francis Bacon, Britain's most underrated Englishman, who was well known for his remarkable language skills and inspired rhetoric. Stratfordians are always keen to keep off the subject of the Promus, Bacon's own notebook, where thousands of new words and phrases appear for the very first time in the English Language, and strangely find their way into the works of Shakespeare. The Stratfordian history only began with the actor David Garrick in the eighteenth Century, and is literally based on no hard facts whatsoever. Will Shagspur did exist, but as he couldn't even write his own name terribly well, are we really expected to believe that this is the man who transformed the English Language from Middle to Modern English?

An alternative opinion is that Shakespeare was a hack. He'd see a play or book or story writ a century or so before, perhaps in Italy or France, and he would blatantly steal parts of it for his own purposes, claiming the ideas as his own. Not that there's anything wrong with the end result. His works are entertaining. He is however the perfect example of that tired old phrase 'there is nothing new under the sun.' He grasped that, embraced it, and made it his trademark. It's how he presented these age-old tales that made him forever synonymous with them.

Everyone who wants to be educated or at least fake it must read some of Shakespeare's work. A good play to start with is Macbeth which is short, violent, and bloody, making it a favourite of many.

Other critical favourites are Hamlet (long, violent, and bloody) and A Midsummer Night's Dream (in which nobody dies, but there's a lot of sex to make up for it). 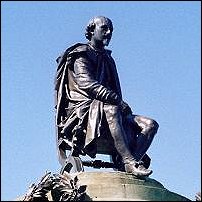 Shakespeare is frequently referred to as 'The Bard', which comes from the middle English for 'The Lyricist', a person who writes songs or rhythmic poetry.

During the time the Bard was writing, females were not allowed to portray female characters on stage. This was something to do with society and propriety, or possibly that a lot of Elizabethan men really liked to put on dresses.

In the United States there is a television show starring a (real life) dog who frequently portrays Shakespearian characters, as well as other literary greats, to bring them to a children's audience. It's called Wishbone, after the dog.

Shakespeare's sonnets are some of the most beautiful love poetry ever written. Memorising one is a great way to impress a date. If you do this, do not pick one of the obvious ones like Shall I compare thee to a summer's day? or My mistress' eyes are nothing like the sun, and avoid ones like the sonnet that ends For I have sworn thee fair and thought thee bright / Who art as black as hell, as dark as night and depending on the bars you frequent you probably want to avoid the ones he wrote to men as well. In fact, thinking about it, it's probably safer to skip memorising the whole thing and settle for quoting a couple of lines and gazing thoughtfully off into the distance.

1Applying this theory across the board, for example, would have you believing F Scott Fitzgerald was a drunk and Lewis Carroll liked little girls.