Lewis Carroll - Logician, Nonsense Writer, Mathematician and Photographer Content from the guide to life, the universe and everything 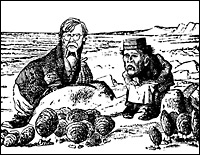 A vicar's son, Charles Lutwidge Dodgson was born in 1832, in Cheshire, England. He studied at Christ Church College, Oxford. He would spend the rest of his life there as the main lecturer in one of his loves in life, mathematics.

His first published work was a poem he wrote at just 13 years of age, entitled 'My Fairy'. It told the story of a fairy who continually said 'you mustn't'. Although the piece was not overly nonsensical, it was similar in its light tone to things to come. He wrote many short pieces of prose and poetry for journals and magazines, as well as many essays on a multitude of subjects. He sometimes used the pen name of Lewis Carroll, deriving from the Latin translation of Charles Lutwidge, Carolus Ludovicus.

He took deacon's orders in 1861; at the time, this was a requirement of all Oxford lecturers.

Dodgson loved children, although he never married or had any of his own. Kids were indeed often the subjects of his stories. One of his favourites was Alice Liddell, the daughter of Henry George Liddell, the Dean of Christ Church. On many occasions he took her and her elder sister out in a rowing boat and on other excursions. He would tell them stories about another young girl called Alice, and her adventures underground.

The nonsensical imagination and creativity involved in the stories were so fantastic, he began to write them down. In 1865, the stories were published under what was to be his constant pen name, Lewis Carroll, as Alice's Adventures In Wonderland. The book became a success almost immediately. A sequel, Through the Looking Glass, and What Alice Found There was published in 1872.

The books had something amazing about them, and were favourites of both adults1 and children alike. Anyone can enjoy the Alice books, whether as a bedtime story, or by studying the satire and social comments within the volumes. The wonderfully bright and nonsensical prose and poetry, combined with the magical characters, made them a success the world over, being translated into many different languages. Many memorable poems, perhaps some of Carroll's best, are from Wonderland and The Looking Glass, including 'Jabberwocky' and 'The Walrus and the Carpenter'. The characters too are classics: the Mad Hatter; the White Rabbit; Queen of Hearts; the possibly opium-smoking caterpillar; the White Knight; Tweedledum and Tweedledee; the Red and White Queens; and Alice herself, a rather dreamy character, similar to Alice Liddell. Alice's adventures were supposedly dreams of her own, or, in Through the Looking Glass, possibly the Red King's.

Alice Liddell and Dodgson, however, had been forbidden by Alice's parents from contacting each other two years before Alice's Adventures in Wonderland was published. Some say Dodgson was deeply in love with the young Liddell, and it is even rumoured she turned down proposals from him. All letters from Dodgson to Alice were destroyed.

Although the Alice books were definitely Carroll's best known books, he wrote a lot of poetry, stories and essays. Another of his less remembered works is The Hunting of the Snark, a rather long2 epic tale of a ship which very loosely relates to the 'Jabberwocky' poem. Many, many acrostic, cautionary and nonsense poems were published by Carroll, Including Phantasmagoria which was even longer than The Hunting of the Snark!

He also published another set of two novels, Sylvie and Bruno (1889) and Sylvie and Bruno Concluded (1893). These were never as popular as the Alice books, and received little critical approval.

Apart from the nonsensical verse and children's books, Carroll wrote over 200 published pieces or books, on a large variety of subjects. A lot of his work was distinguishable by the tone it was written in, including many of his essays which were often given a Carrollean touch by Dodgson. He wrote on subjects such as etiquette, lawn tennis championship rules, letter writing, formal education for women, moral issues and much else. Other writings included cautionary tales, witty brain-teasers and newly invented card, word and other games, as well as some clever codes.

Carroll was a mathematician; he deeply loved and was fascinated by the subject. In his time, he wrote over 60 maths or logic books. His mathematical work is hard to find. At first it may seem odd that a creator of such nonsensical writings would have such an interest in this area, although the logic involved in maths appealed to the very clever mind of Dodgson, and logical oddities are at the root of a lot of the wit in the Alice books.

Easier to find than the mathematic material is a set of books Carrol wrote called Symbolic Logic that contain puzzles like this:

The answer is: All my potatoes in this dish are old ones. The puzzles range in difficulty, this being one of the easiest, some being up to 10 lines long.

Dodgson was a very well known and respected portrait photographer. For 25 years of his time at Christ Church, he spent at least as much of his time on his photography as his mathematics. He took photos of many prominent people, including the Royal Family. Many of his pictures are in collections such as the Princeton University Archives Historical Photograph Collection and/or visible on the internet. In fact, he was one of the most influentual Victorian photograpers.

It is hard to decide on the unfortunate paedophile accusation arising from some of his nude photographs, innocent in themselves by today's standards.

Charles Dodgson died in 1898. Since then, his work has been enjoyed by millions who have read the books or watched the films. Alice has made it onto the big screen a number of times, in musical, live action and animated forms, most popularly in the Disney cartoon film, Alice in Wonderland. All the films were based mainly on the first book, although they did include characters from Looking-Glass Land, such as Tweedledum and Tweedledee. A film was even made out of 'Jabberwocky', and a set of songs based on The Hunting of the Snark. Carroll created stories that are among the most frequently referred to in the English language, and that have inspired paintings and other art works all over the world.

Alice's surreal adventures were a precursor of psychedelia, and in the late 1960s many looked into them for a life meaning. Two very psychedelic Beatles songs were specifically inspired by the Alice books, 'Lucy in the Sky with Diamonds' and 'I am the Walrus'. Band-member John Lennon's favourite books were the Alice stories. Lewis Carroll also featured on the front of their 1967 album, Sgt Pepper's Lonely Hearts Club Band. Films and books, especially fantasies, such as Jim Henson's Labyrinth film and even some of the Harry Potter stories, include Wonderland-like aspects or styles of writing. And it's not just the English-speaking nations that have enjoyed their visits to Wonderland; the books have been translated into over 100 different languages. Lewis Carroll has helped shape our language too, creating portmanteaus such as chortle (chuckle, snort) and mimsy (flimsy and miserable). Even the word portmanteau was an invention of Carroll's, and is featured in many dictionaries. It is fair to say that Charles Dodgson, as Carroll, has influenced the way today's culture thinks.

1It was rumoured that Queen Victoria, a big fan, suggested to Carroll that he might dedicate his next book to her, and was very upset when he duly presented her with a mathematical work. Dodgson firmly denied this rumour.2The Hitchhiker's Guide to the Galaxy radio series is similarly divided into Fits, inspired, as Douglas Adams confirmed, by this poem.