Shakespeare's Birthday Content from the guide to life, the universe and everything 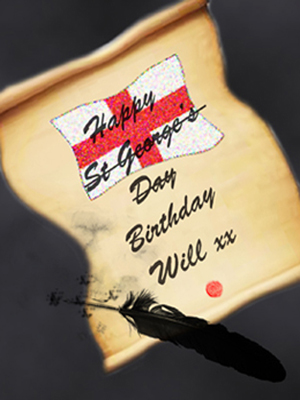 Many books and pamphlets confidently assert 23 April as a fact but in reality no one knows the actual birth date. We do know that he was baptised on Wednesday 26 April because we can see the record in the parish register: Gulielmus filius Johannes Shakspere1.

Since it was customary to baptise infants within days of birth, and since Shakespeare died 52 years later on 23 April, and, most significantly, since 23 April is St George's Day2, it has become traditional to assign the birthdate of England's most famous poet to 23 April.  As with most 16th Century births, the actual day is not recorded.

The Keeping of Records

To be perfectly accurate, this is not the record of his baptism. It is a copy of the record of his baptism. On 5 September, 1538, following the split with Rome, Thomas Cromwell, Henry VIII's Vicar General, ordered that each parish priest must keep a book, and that the Parson, in the presence of the wardens, must enter all the baptisms, marriages and burials of the previous week. The book was to be kept in a 'sure coffer' with two locks (one key for the vicar, the other for the wardens). A fine of 3s 4d was to be levied for failure to comply. From 1598 it was ordered that records were to be kept in 'great decent books of parchment', and copies or 'Bishop's Transcripts' of new entries sent each month to the diocesan centre. Previous records, often on scraps of paper, had to be copied into the new books, but many had deteriorated and were unreadable. William's baptism record is the fourth copied in for April 1564, by the same clerk. The handwriting is consistent. We can have some confidence that this date is likely to be correct.

The Book of Common Prayer and Baptism

It was a long-held belief that children were baptised three days after birth, and that this timescale was laid down in the Book of Common Prayer. The Book of Common Prayer does no such thing, suggesting not postponing baptism beyond the first Sunday or holy day following the birth 'unless upon a great and reasonable cause declared to the curate, and by him approved'. Shakespeare died on 23 April, 1616, and his memorial in Holy Trinity church contains the words 'obit anno [....] aetatis 53'; that he died in his 53rd year. This implies that he was born before 24 April, 1564, otherwise he would have died in his 52nd year.

In the latter end of April 1564 Sundays fell on the 23rd and 30th and Saints' festivals fell on Wednesday 19th (St Alphege), Sunday 23rd (St George) and Tuesday 25th (St Mark the Evangelist). Had Shakespeare been born before 21 April the expectation might be that the baptism would have taken place on the 23rd, St George's Day. It is more likely that he was born on the 21st, 22nd, or 23rd of April. As such the first convenient holy day (Sunday being too soon?) would have been Tuesday 25th, St Marks. St Marks was considered an unlucky day. It had been called 'Black Crosses' in the first half of the 16th Century. Altars and crosses were hung with black and local tales told of spectral figures of those destined to die that year would haunt the churchyard – reason enough for a curate to excuse the postponement of the baptism to the following day.

The Limits of Certainty

All we can reliably infer is that Shakespeare was probably born on Friday 21st, Saturday 22nd or Sunday 23rd April, 1564. There is an aptness to selecting St George's Day for the birth especially as he died on the 23rd and the power of myth and symmetry has proven irresistible.  So 23 April it has become. As he himself almost wrote, 'Our little lives are rounded with an appropriate coincidence'. We should be glad that we do know the month and year he was born. Sir Walter Raleigh, a man more famous in that age than Shakespeare was, is generally considered to have been born 'sometime' between 1552 to 1554.

One theory is that Shakespeare was born on 22 April, 1564. In 1626 Elizabeth, William's granddaughter, married Thomas Nash on 22 April. Unlike her grandmother Anne, Elizabeth had no need of a hasty marriage. Though she would marry twice, she had no children. Why then select a date so close to the anniversary of her grandfather's death, unless it had some added significance, such as an honour to his birthday?

1William son of John Shakspere.2The feast day of the patron saint of England.