Phoenix, Arizona, USA Content from the guide to life, the universe and everything 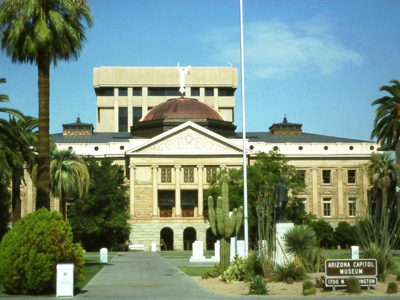 One time northbound stopover for Mexican cattle and westbound bed-down for gold prospectors and earthquake insurance salesmen, Phoenix has unaccountably grown into a destination in its own right. This is some 600 years after the highly perceptive Hohokum Indians concluded that in the vast expanses of North America there must be thousands of places more climate-friendly than southern Arizona, and promptly left.

Lacking historical insight, but not an abundance of drive to do the impossible (or at least the extremely ill-advised), Jake Swelling and Lord 'Darrell' Duppa re-established the city in 1867 on the old Hohokum irrigation canals. They named the city 'Phoenix' after the mythical bird which rises from its own ashes, and so ushered in an unbroken history of area dwellers disturbingly comfortable with the concept of self-immolation.

That is to say that Phoenix is hot. It is so mind-bubblingly, skin-charringly hot that the local newspaper warns against exposing skin, in the height of summer, for more than ten minutes. With temperatures that reach 120°F, the Sky Harbor International Airport periodically shuts down because the planes cannot take off. Even the hardy Sonoran desert lizard, who tends to think of a fresh magma flow as temperate, has been known to suffer in the heat.

Nevertheless, armies of slush-weary senior citizens, known locally as 'snow birds', continue to pile into trailers all over the snowy north and settle in the Valley of the Sun, where they share a deep and abiding belief in air-conditioning, early bird dinner specials and the 'Creator', although not necessarily in that order.

It is the Creator, in fact, to whom they credit the development of Phoenix as the bustling heart and state capitol of Arizona. His tireless love for His people, and their everlasting gratefulness for His wisdom and foresight permeates most Phoenix suburbs in one way or another. We are speaking, of course, of Del Webb - Developer of Sun City, Sun City West, and various communities dedicated to his Vision of Living, which was that homes should be comfortable and affordable and above all free from elderly, meddling parents. And so, to the great relief of harried middle-aged couples everywhere, he made a place for them all to go. Sun City, Arizona opened in 1960, attracting thousands of silver-haired folk (thus honouring the Aztec word 'Arizuma' from which 'Arizona' came, meaning 'silver-bearing') to tiny pastel ranch houses on streets which Webb designed in concentric circles to make damn sure that no one ever left.

Upon first arriving in Phoenix the snow birds astutely observed that they were in a desert, resplendent with all of the usual desert-like characteristics such as a natural inability of the landscape to retain water or support plant life. In the face of its understated, almost ascetic beauty and overall brittle ecology, the snow birds immediately set about their unique approach to desert management. They built golf courses.

The Powers That Be made a valiant effort to enlighten the Snow Birds, arguing that, among other things, other people needed the Colorado river water to live, but they finally caved when they realised that Snow Birds vote with dogged consistency, and so the Central Arizona Project was born. Today there are over a hundred golf courses in the metro Phoenix area.

Along with the amazing and indefensible proliferation of golf courses has come the much more defensible but no less amazing proliferation of housing. Many Phoenix suburbs double in size every ten years, on average. At this rate the entire land mass of the Earth will be one gigantic neighbourhood of tile-roofed stucco slab houses (locally known as 'Taco Bell Architecture') in just 120 years - a fact which should lend some urgency to this entry.

Today, this growth is fuelled by an influx of a new kind of reality-challenged entity, the high-tech firm. Spilling out of the Bay Area, these firms are finding their way to Phoenix in record numbers.

Unable to deal with anything that doesn't process huge amounts of data, render in 65 million colours or at least beep with annoying regularity, these groups of roving engineers and marketers seem to be attracted by the scarcity of workers, high cooling costs, growing traffic problems and an infrastructure which is lagging behind the city's expansion. In short, many of the same problems they left behind.

Assuming they bring the same blind zeal with which they pursued business in old San Francisco, they should all do swimmingly, until costs again become astronomically high and like a swarm of locust they all move on to someplace even more difficult and uncomfortable to do business. In the meantime, the rest of us will have no choice but to hang on and ride it out.

Phoenix is the opening setting for Alfred Hitchcock's 1960 classic Psycho. The initial shot is a panoramic of the city and the camera slowly zooms into a hotel room to reveal Janet Leigh getting dressed after an illicit afternoon romp.