Arizona, USA Content from the guide to life, the universe and everything 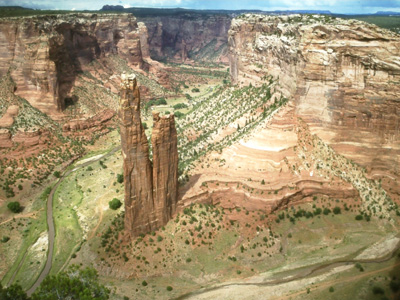 Located in the most southwestern portion of the American southwest, Arizona was briefly a part of the Confederate States of America during the American Civil War but when the Confederacy lost, Arizona reverted to being a US territory again. Nothing ventured, nothing gained. On February 14, 1912, Arizona entered the Union as the 48th State.

The climate and topography of Arizona varies from snow-capped peaks over 12,000 feet high in the north, to cacti and rattlesnake-filled deserts in the south. The politics swing as freely. The State capital, Phoenix, is filled with conservative business tycoons knocking agendas with fervent ecologists, with intermittent forays by drug smugglers sneaking across the Mexican border and occasional appearances by white supremacists and other militia-types, cheerfully awaiting the coming Armageddon and the end of the world as we know it. Picture a shotgun marriage between Texas ranchers and California yuppies and you have the general idea.

Arizona has an official State Tie, the Bolo tie. It looks strikingly like a leather hangman's noose, but with your grandmother's brooch where the knot is. They also have a state candy, a tequila and hot pepper-flavoured lollipop with a genuine agave worm embedded in it, the kind normally found pickled in the bottom of a bottle of mescale.

There are very generous handgun laws in Arizona, allowing just about anyone to carry a loaded sidearm in public just about anywhere not specifically banned. In recent years, the town of Tombstone1 had to ban the wearing of weapons by the general public during daylight hours, as the actors who portrayed Wyatt Earp and Doc Holiday complained that when they staged their mock gun battles, enthusiastic and inebriated tourists were returning fire with live rounds.

Average summer temperatures are around 110°F, which is hot enough to brand anyone foolish enough to sit down on their car seat belts and make tar bubble up from the street. Appropriately enough, the unofficial state slogan is, 'But it's a dry heat'. Because of the extremely hot weather, Arizonans (or 'Zonies') spend the summer bobbing along rivers and streams in inner tubes or impatiently awaiting the return of winter so they can ski on sometimes artificial snow.

It is generally assumed by most Zonies that when the 'big one', the mother of all earthquakes, sends California sinking into the Pacific, they will finally have a real beach of their own and real waves to surf on. But they will miss Disneyworld and Hollywood.