A Beginner's Guide to Feng Shui Content from the guide to life, the universe and everything 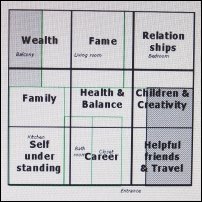 Feng Shui1 is the ancient study of people placing objects in certain ways to observe a certain flow of good energy. The Feng Shui term for a sort of a good energy is 'the flow of chi'. Commercially2, Feng Shui has been interpreted to mean 'furniture placement in homes', and while this is a use of it, graves and building placement are also important. The basic goal is to ensure good fortune through giving the practitioner peace of mind and good energy.

The History of Feng Shui

The Chinese, who had a comparatively superstitious culture, were always very careful in placing objects, lest bad fortune would come from their carelessness. When the Chinese decided on a place for a city, they were wary of just choosing a place. A bad place could mean bad fortune for its inhabitants and a nice spot would mean good fortune. Only the oldest and most wise of them could choose.

An imbalance of yin and yang - too much of either - would ruin the Feng Shui. The yin and yang are the two principles of the universe. Yin is the feminine and yielding principle, the nurturing, the dark and the damp; yang is the masculine, the active, the light and the dry. Each shades into the other on a continuum, yet at the deepest point of each, is the germ of the other. Yin is sometimes associated in Western culture as the bad things of life, and yang is the good things. But this is incorrect.

How to Achieve it

Where Not to Live

Feng Shui teaches the troubles of living near casinos, government buildings, temples, butcher's shops, graveyards, hospitals or straight roads. Casinos are a bad place to live near because they may bring crime which would unbalance the system. Government buildings reserve most of the area's vital energy, and would leave none for a person living by it. Temples leave an imbalance in the yin and yang. Butcher's shops contaminate an area with killing, which is said to block the flow of chi. It's not a good idea to live by a graveyard, as unhappiness and sorrow would spread. Sickness destroys the vital energy, so near a hospital is not an advisable place to live. Living near a straight road pointed towards the houses is said to invite evil energy.

If possible, live near a winding, meandering river or road as they invite good energy. But do not live near a river with loud rapids as it disturbs one's tranquillity. A hill or mountain behind the home helps protect the home from cold winter winds, with smaller hills to the side of the house.

In Feng Shui, a home is not to be different in any major way from the neighbourhood. A house is not to be much taller than nearby houses, it is also bad to have a home much smaller than nearby houses. To stand out prominently is bad for the flow of chi. In keeping with this idea of not standing out, a rectangular house is most suitable. It is also very important to have a house with good ventilation and sunlight. This is to ensure that it receives vital energy.

Having an appropriate driveway and path is also important. As with roads, driveways should be meandering, if possible. Practical designs could be in a horseshoe or circle shape.

There are many ways to achieve Feng Shui outside of furniture placement. The arrangement of furniture is an astronomical science. Certain stars are supposed to show the meaning of parts of one's home and when recorded, they are said to reveal what corners and parts of your house mean.

Ba Gua assigns nine areas of your house to nine meanings. The nine meanings are fame, wealth, family, knowledge, career, helpful people, children, marriage and a centre area. You are supposed to decorate an area appropriately to its meaning.

In Feng Shui, the significance of toilets and bathrooms is the source of some debate. Some argue that leaving the toilet seat up will flush away fortune (though this is widely regarded as a myth) and checking one's toilet every time you use it is said to bring bad energy through worry. Bathrooms are also important. Where you sleep in relation to the bathroom holds some significance. A bathroom should not be directly parallel to your bedroom in any way - above, below, aside or across from it - and since bathrooms have a bad energy about them, one is supposed to decorate it with things of better energy.

The Chinese have a special respect for their traditions. They believe that the burial of a person will affect future generations. The landscape, including the mountains and hills could affect the descendants. If a mountain range near the proposed burial site looks like a row of soldiers, the future generations will be army commanders and generals. This is very frustrating; what may look like something to one person may look completely different to another. It takes much effort to find a suitable burial place.

The main goal of Feng Shui is to promote positive energies by creating channels for them to come through, and keep a beautifully balanced environment. This environment is said to provide a person with wisdom and clear thinking. Indirectly, this can bring him or her great wealth. Many are under a misconception that the art of Feng Shui alone is supposed to bring one fame and fortune, but it is only believed that it will help a person's mind stay alert.

1Pronounced 'Fung Shway', which translates as Wind Water.2That is, in modern Feng Shui in more western civilisations.3Not floating of course. This refers to the top surface of tables and seats, not the legs of them