The History of Samoa Content from the guide to life, the universe and everything 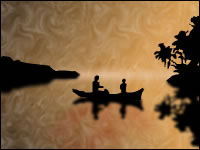 Today Samoa is a divided nation, but until the early 20th Century Independent and American Samoa were the same country.

The Samoan Islands lie either side of the 171st meridian in the south Pacific. American Samoa is on the east; Independent Samoa on the west.

The history of Samoa is sketchy prior to the arrival of Europeans and their record-keeping, but there are spoken histories and some archaeological remains which provide us with some information. Huge gaps remain, however, so the following history is punctuated with leaps of hundreds of years for which there is no evidence of what was happening on the islands.

Archaeological evidence suggests that humans first arrived on the Samoan Islands around 1000 BC. The earliest known evidence of human occupation, a Lapita1 village located in what is now a lagoon on Upulu Island, dates from this time. These first settlers were probably Polynesians who travelled by outrigger canoe from Tonga.

By 200 AD, Samoa was a hub for Polynesian migration in the south Pacific. Population pressures and food shortages forced people to find new islands to inhabit.

At this time, Samoans lived with their extended families in fortified coastal villages. These villages were ruled by a council of elders called matai. As populations grew, land and coastline became more valuable, leading to frequent and violent clashes between villages.

Around 950 AD, the island of Savai'i was ruled by Tonga (for reasons that are not now recalled). However, the Samoans opposed Tongan monarchy and, eventually, a peace treaty was brokered and they left. It is not known what the quid pro quo was for Tonga.

Between 1722 and 1791, several European ships landed on Samoa while on their way westwards to search for the Great Southern Continent. The locals attacked at least two of the landing parties, and Samoans acquired a hostile and violent reputation. As a result, traders (who were developing Pacific trade routes carrying goods such as whale products, sandalwood and beche de mere2) avoided Samoa until the early 1800s.

By 1820, a few Europeans had braved the reputation of the islanders and settled on Samoa. These were mostly retired whalers and escaped convicts who enjoyed the climate and the solitude and who found the people to be open and friendly.

In 1830, the first missionary arrived from England. Peter Turner established a Wesleyan Methodist Mission in Apia and converted the chief of all Samoa, Malietoa Vainu'upo. Following his lead, the general population soon converted and Samoa became predominantly Methodist. The Samoans' formidable reputation was dispelled once and for all: European traders started to include the islands in their regular routes, taking advantage of the seafood and tropical fruits that were grown there.

By the 1880s, missions had also been established by the London Missionary Society3, the Catholics and the Mormons. These were in addition to those of the Methodists. Trade began to flourish with Britain, the USA and Germany.

Almost inevitably, these three colonial powers began to squabble over their share of Samoa's resources and trade as well as their respective influence over a country with such a strategic trading position in the mid-Pacific. Simultaneously, Samoans started to resent foreign influences on their culture and economy.

Tensions escalated between Britain, the USA and Germany and, in the late 1880s, all three nations sent fleets of warships to the harbour of Apia to defend their claims to the islands. A contemporary Samoan author described the situation as three large dogs snarling over a very small bone. They were brought to their collective senses by a natural disaster. In March 1889, one of the worst cyclones ever seen hit Apia. The Germans lost three warships, the Americans three and British escaped out of the harbour just in time. 92 Germans and 54 Americans were killed.

Whether it was the realisation that this paradise could in fact be a dangerous place or simply the shock of such loss of life, the cyclone led to the three powers signing the 1889 Berlin Treaty. Under the Treaty, an Independent Samoa was established under a Samoan ruler to ensure neutrality from Britain, the USA and Germany. The Treaty resulted in internal tensions in Samoa and there was an upsurge in fighting between the Samoan dynastic families as they sought power. This threatened to destroy trade, and the three powers stepped in again to protect their interests.

In 1899, the Tripartite Treaty was signed by Britain, the USA and Germany. Under the Treaty, Germany assumed control of the Samoan islands west of the 171st parallel and the USA took over the eastern islands. Britain had sole claim to Tonga4, the Solomons and Nuie. Thus the two nations of Samoa came into being.

The division of the country was undertaken without recourse to consulting the people of Samoa, which unsurprisingly resulted in enormous resentment against the new foreign control. A fierce independence movement sprang up in Western Samoa in particular, where the Germans held power.

Independence for Western Samoa in the 20th Century

At the outbreak of World War I in 1914, Britain persuaded New Zealand to seize Western Samoa in order to reduce German influence in the Pacific. This the New Zealanders did with no resistance from the occupying power.

During World War II, US soldiers visited Apia from all over the Pacific for their rest and recuperation breaks. Aggie Grey, a local entrepreneur, built up a business selling hamburgers and coffee to these servicemen. Her business soon developed into a hotel of international repute which remains the best hotel on the islands today. Aggie herself is supposed to have been the model for Mitchener's Bloody Mary, made famous in the musical South Pacific.

New Zealand subsequently administered the country until 1961. Western Samoa became part of the British Commonwealth as a result, and trade remained an important part of the economy. Perhaps more importantly, the New Zealand government allowed Samoans to move to New Zealand itself, where work was more bountiful. The resulting income from absent family members proved to be important when it came to helping Samoa rebuild after cyclones. It also greatly aides in investing in tourism ventures and seeing them through down-turns in world trade.

On 1 January 1962, Western Samoa declared independence: the first Polynesian nation to do so in the 20th Century. A constitution was adopted and a British-style parliamentary system established, with adaptations for local customs and Christian principles. In 1997, Western Samoa changed its name to Independent Samoa, despite protests from American Samoa.

US Military Rule then Democracy in American Samoa

American Samoa came under the jurisdiction of the US Department of the Navy when the nations were divided at the turn of the 20th Century. The US guaranteed to protect the rights of Samoans in exchange for their naval base and a coaling station in the capital, Pago Pago5. The American military commander of the base was also named Governor. American Samoans became US nationals, but could not vote and were not represented at Washington.

Until the 1960s, life went on in American Samoa much as it had done for centuries: the Americans having adopted a non-interventionist approach to ruling the country. Traditional customs and a largely subsistence economy were retained. However, an American magazine article titled America's Shame in the South Seas, published early in the 1960s, depicted the life in American Samoa as an example of poverty and squalor. As a result, President Kennedy appointed a new governor and made funds available to modernise the territory.

American Samoa became a USA construction project and was overtaken by haphazard development. Roads, schools, European-style homes, sewerage systems, hotels, bars, an international airport, a public auditorium, an hospital, tuna canneries and TV transmission from the USA were installed in less than a decade. The 20th Century had arrived with a bang in American Samoa with no consultation with the local people.

Once Washington had spent the money on developments, the funds to mantain the buildings and systems that had been established dried up. The resulting social unrest gradually led to greater autonomy for American Samoans as they struggled to deal with the benefits and disadvantages of 20th Century life. Funding from the US Department of the Interior was secured to the tune of around US$25m per annum6 to support the Samoan economy.

Visitors will find that the two nations of Samoa have very different atmospheres about them. This is entirely due to the influence of the different colonial powers over the past 100 years. There is much of traditional Samoan culture to be seen in both nations, particularly in the rural areas. However, the American building projects of the 1960s scar Pago Pago while providing crucial employment to the population. In Independent Samoa, the economy depends largely upon money from overseas family members as well as upon the slowly developing tourist industry.

Both nations appear to be content and peaceful early in the 21st Century, having experienced 200 years of upheaval and Westernisation relatively unscathed and both having regained democracy of a kind in the last 50 years.

1The people are named after their decorative pottery.2Sea Cucumber.3The Congregational Church in Samoa today.4Which, incidentally, was never colonised by any foreign power.5Pronounced Pango Pango.61997-98 figures.