Philadelphia, Pennsylvania, USA Content from the guide to life, the universe and everything 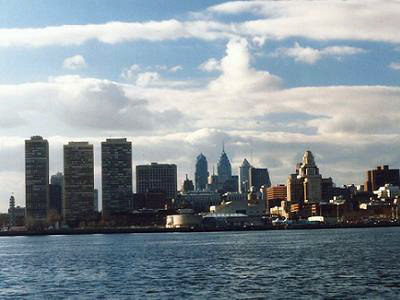 When William Penn, the Quaker, acquired the land nowadays known as 'Pennsylvania' from the King of England, he began plans for, among other things, the capital city of his colony. The city was to be known as the City of Brotherly Love, a haven for all who would wish to enter1, and located between the Delaware and Schuylkill2 Rivers. From its start as a trading stop on the two rivers, to its stint as the capital of the United States, through its many industrial years, the long period where Frank Rizzo served as de facto dictator, and into its current stage as a million different things, Philadelphia embodies the American city.

You will quite likely arrive at either Philadelphia International Airport, or 30th Street Station. Both are functional but not distinctive in any way. At some point you will also probably use the Public Transportation System.

From street vendors all the way up to classy, expensive French restaurants, Philadelphia has about anything you could want. The hallmark of the food scene is Le Bec-Fin, but you'll need deep pockets as well as a reservation made at least a week in advance. The hallmark of the other food scene is Pat's King of Steaks, the small establishment that is the world capital of the cheesesteak. Due to the presence of many examples of both these types of eaterie, Philadelphia is also known as the City of Brotherly Love Handles.

Center City Philadelphia is located in the region where the band between the two rivers is at its smallest.6 This part of the city makes sense (well, almost) and it's not difficult to find you way around. It's also home to most of the tourist attractions. Due west of this, directly on the other side of the Schuylkill, is the neighbourhood known as University City, due to its containing the campuses of University of Pennsylvania and Drexel University. Further West lies the dreaded neighbourhood of West Philadelphia, which should be avoided if you have anything of value. Life included. We also have South Philadelphia, still a distinctly Italian community, North Philadelphia, also with a high crime rate as well as Temple University, the Northeast with a growing Russian population, and the Mt Airy/Germantown area, a counterculture haven.

Weather: Too hot in the summer, too cold in the winter, and perfect for a few weeks in the spring and fall, Philadelphia gets a good amount of rain and snow, and a heat wave every summer.

Sports: The Phillies for baseball, Eagles for football, Flyers for hockey, and the 76ers for basketball.

Dialect: Fluffyans like to slur their words. Also note: the football team is the 'Iggles', dihydrogen monoxide is 'wooder', and any word ending -erry is pronounced -urry.

Motto: The City That Loves You Back. Cough, cough.

1As a Quaker, Penn had been persecuted for his beliefs. He wanted to establish Philadelphia as a place for all God-fearers, no matter what their sect or belief.2Pronounced skoo-kull. No, really.3Some advice for travellers: available in this area are several different horse-and-buggy rides. These can be quite enjoyable, so long as you can take the smell of a horse.4There used to be two river drives, one on each side of the Schuylkill: East River Drive and West River Drive. Now East River Drive is officially called Kelly Drive. And of course, if you're rowing, you'll want to be in the river proper.5Everything in Philadelphia is named after him. Seriously.6Which is just under three miles wide.