The Eruption of Mount Vesuvius, 79 AD Content from the guide to life, the universe and everything 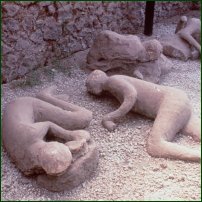 Mount Vesuvius is a huge volcano located near to the city of Naples in Italy. In 79 AD, it erupted and buried the town of Pompeii in piles of ash and the less well-known Herculaneum in volcanic mud, suffocating people and preserving their bodies. The remains leave an astonishingly accurate record of life in a Roman town.

Some inhabitants of the area surrounding Vesuvius must have suspected that something was going to happen, particularly because of the serious earthquake a decade previously. Earth tremors, already common in the area, became more frequent in the days leading up to the eruption. Some people began packing to leave on 22 August, two days before the eventual eruption, but the number who stayed suggests that those who fled may have been seen as paranoid. Most people were caught unprepared. Even those who suspected something was wrong were in the dark as to exactly what was to come. The geographer Strabo had confidently written some time before that Vesuvius had been extinct for several centuries – nobody expected a volcanic eruption.

The major source of information on the sequence of events during the eruption comes from Pliny the Younger, who wrote an account of it to a friend of his, the historian Tacitus. One letter he wrote tells the story of his uncle, Pliny the Elder, a naval commander based in the town of Misenum1, across the Bay of Naples from Pompeii and Herculaneum. The elder Pliny commanded a number of his ships to be made ready and took them across the bay, initially for observation but then as a rescue mission, when the seriousness of events became clear. He was able to rescue a number of people but later died when he was overcome by ash which rained down from the volcano. The second letter Pliny the Younger wrote about the eruption details the rather tamer experiences of himself and his mother as they waited for news of his uncle and were forced to escape. His account became the standard work on volcanic eruptions for centuries.

According to Pliny's first letter, the first sign of the eruption on the day was smoke rising from the mountain in a mushroom cloud. As his uncle sailed closer to the source, ash and rock began to fall on the boats. Later there were flames – presumably lava – on the mountain and the ash and stones continued to fall. The elder Pliny and his friends were forced to attach pillows to their heads in an attempt to protect themselves from the rocks. The total explosive power of the eruption was more than 100,000 times more powerful than the nuclear bomb which destroyed Hiroshima. An eruption of this magnitude occurs roughly only every thousand years or so. In 79 AD, there was no precedent in recorded history for such an event. The incredible power of the eruption reduced the height of Vesuvius by about half and moved the coastline about four hundred metres further out than it had been, due to the debris piling up in the shallows.

The ash made the whole area dark, lit only by fire from Vesuvius. It must have been a hellish sight.

Broad sheets of flame were lighting up many parts of Vesuvius; their light and brightness were the more vivid for the darkness of the night … It was daylight now elsewhere in the world, but there the darkness was darker and thicker than any night.
Pliny the Younger, letter 6.16.

The inhabitants of the area were forced to choose between fleeing over increasingly impassable terrain, covered as it was with a deepening layer of lapilli2, or trying to stay and find shelter in the city. Those trying to shelter inside buildings were forced to listen to the sound of pumice and ash building up on the roofs until many of them gave way, crushing the inhabitants. Just before midnight on the day of the eruption, pyroclastic flows began to hurtle down the mountainside. These are deadly mixtures of gases and hot pieces of rock that travel extremely fast and are hot enough to kill anyone who gets in their way. They continued at intervals until beyond dawn on 25 August. They may have been from a huge column of ash rising from the volcano supported by the heated gases beneath. When this column collapsed under its own weight, the pyroclastic flows could have hurtled down the slope, catching many of those who had stayed behind unawares. The heat made the sea steam. Until relatively recently, scholars believed that Pliny's account was rather exaggerated because it was thought that pyroclastic flows could not travel as quickly as he said they had. However, it has since been shown that they can. The type of eruption which occurred in 79 AD is now known as a 'Plinian' eruption.

The sight that met our still terrified eyes was a changed world, buried in ash like snow.
Pliny the Younger, letter 6.20.

Pompeii was left completely buried in ash, preserving it exactly as it was on 24 August, 79 AD, while Herculaneum was covered by boiling mud. The mud would have been about 400°C, killing instantly anyone in its way.

The Discovery of Pompeii

It was not until some point between 1594 and 1600 that anyone found out anything to do with Pompeii. An architect named Domenico Fontana discovered some inscriptions while digging a tunnel in an attempt to divert the course of the river Sarno, but he did not suspect the existence of the city beneath him. In 1748 Charles of Bourbon, King of Naples, began regular excavations of the site. His team's interest was mainly in artistic objects such as mosaics and statues, which sometimes led to the buildings and streets being reburied. Since then, though, the city has been excavated properly, and only a small area remains left to investigate.

More recent archaeology has been with the intention of allowing the visitor to see the city as it originally was. Giuseppe Fiorelli, who directed excavations between 1860 and 1875, ensured that houses were excavated from the top down instead of the bottom up, which helped to preserve the contents of the buildings. In 1860 Fiorelli developed a technique to put plaster in the spaces left in the ash where bodies had been before they rotted away. This is what allows us to see the famous bodies of Pompeii, in the same positions they died in. Only about two thousand bodies have so far been discovered, and given that the population of Pompeii was probably ten times that or more, there are many left to be found in unexcavated areas, both within and outside the city. It is impossible to know how many escaped alive by leaving before the eruption, and how many of those who left still did not survive.

1Pliny the Elder was a well-known Roman, most famous today for his Natural Histories.2Pebbles made of ash.