Bread Content from the guide to life, the universe and everything 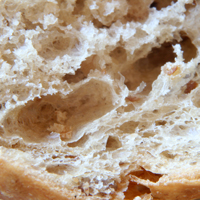 Any of a large number of foodstuffs generally characterized by the combination of some finely-ground grain with a leavening agent such as yeast or baking soda and shaped into loaves.

Bread is sometimes called 'the staff of life'. One presumes this refers to a staff used to support things such as green beans rather than the sort of staff you can hire from a temporary staffing agency.

Bread has a long history, being one of the first foodstuffs of civilization. God once had a few words to say about unleavened bread, the manna of the Israelites may have been a sort of bread, and Jesus Christ distributed loaves with his fishes1.

Closer to home, the bread machine is one of those things that could only have been invented by an advanced industrialised culture. Bread produced by a bread machine is better than stuff from the supermarket, but still not as good as that made by hand, preferably with freshly-ground wheat, by someone who really cares.

Oddly enough, a diet of bread and water is a traditional punishment for unruly prisoners in confinement. Perhaps this is because it is the minimum that will keep someone alive; dead prisoners tend to show up poorly on a prison warden's quarterly fitness report.

Bread is also one of the key ingredients in sandwiches and French toast.

A good introduction to the craft of baking bread is the Laurel's Kitchen Bread Book. Basic bread recipes are so simple that you've got no excuses not to try and make your own!

1The Judeo-Christian slant of this paragraph is not to show favour to any one religion in the world, merely the importance of bread in faith.