Heaven - The Christian's Blessed Hope Content from the guide to life, the universe and everything 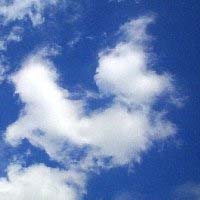 O they tell me that He smiles on His children there, and His smile drives their sorrow away.
- Rev Josiah Kelley Alwood (1828 - 1909)

Heaven could possibly be defined as the place where God, angels, and the righteous dead reside.

Famous figures like Madalyn Murray O'Hair (1919 - 1995) were adamant that it did not exist. Others are equally adamant that it does. There is no objective evidence to prove it one way or the other. Furthermore, alternate versions to that of Christianity exist (or have existed), like the Norse Asgard site of Valhalla, the Greek Elysian Fields, the Jewish Gan Eden, the Confucianist Tian, and the Muslim Jannah, but for information on those one must search elsewhere. This is an article on the Christian view of Heaven.

A Church of England funeral page tells us:

What Heaven is like none of us daresay to precisely but we know that we shall delight in the presence and love of God and of the whole company of Heaven. Whatever is wonderful about life here on Earth is only a glimpse of the glory of the life that is to come.

According to believers, Heaven will be a place of perfect love, perfect justice, and perfect holiness. There will be no crime, no sickness, and no death. In Heaven, they believe, they will reap the reward that they were denied on Earth. Jesus said:

Do not store up for yourselves treasure on Earth where it grows rusty and moth-eaten, and thieves break in to steal it. Store up treasure in Heaven, where there is no moth and no rust to spoil it, and no thieves to break in, and steal.
- Matthew 6:19 New English Bible.

He told another man:

If you disbelieve me when I talk to you about things of Earth, how are you going to believe if I should talk about the things of Heaven? No one ever went up into Heaven except the one who came down from Heaven, the Son of Man whose home is in Heaven.
- John 3:12-13 New English Bible.

So what is this Heaven like? Will there be people sitting around on clouds playing harps? We don't know. We have never been there. Perhaps we will see Handel himself conducting the heavenly choir. Here we have arthritis and tooth decay. There we will have none of that, but perfect celestial bodies. We can't even imagine all the good things we will see there, but some day we will know. Nor can we comprehend the work we will do there. The Eastern Greek Orthodox Church website says that the true church is composed of all who are in Christ - in Heaven and on Earth - those in Heaven with Christ are alive, in communion with God, worshipping God, doing their part in the body of Christ. They actively pray to God for all those in the Church, and perhaps indeed for the whole world.

So Who Gets In?

To all who did receive Him, to those who have yielded Him their allegiance, He gives the right to become children of God.
- John 1:12

Christian doctrine teaches that when a believer dies he goes to his heavenly home. There he will find other believers who have gone before. An old hymn speaks of the day 'When We All Get To Heaven' and says: 'What a day of rejoicing that will be'. Many Baptist churches ask potential members this question. If you were to die today and God asked why He should allow you entry into His Heaven, what would your answer be? Billy Graham once answered that question: I trust only in the blood of Christ shed for me. This is because no sin is allowed in Heaven, but the blood of Christ perfectly cleanses one until no sin remains. There are Christians who honestly think that this is an extended process which occurs in three stages.

American Evangelist Dwight L Moody (1837 - 1899) once observed that the aristocracy of Heaven is one of holiness. However, everyone there is a member of this aristocracy due to their relationship with Christ.

In The Pilgrim's Progress Bunyan has his lead characters warmly welcomed at the gate because they have a certificate from the King. Ignorance, however, has none and so he is bound and flown to a door on the side of the hill and put in there. The narrator comments:

Then saw I that there was a way to Hell, even from the gate of Heaven...

A Joke About Heaven

There is an old joke of unknown origin that portrays a recently deceased evangelist being assigned quarters in Heaven. The angel who organises such things escorts him to a long row of identical condos; 'This one will be yours', he is told. 'We passed a large estate on a hill', the evangelist interjects; 'Does that belong to one of the twelve apostles?'

'No', he is told, 'that is the home of congressman Pepper'. 'I don't mean to complain', the evangelist says, 'but I have worked my whole life for the Lord. Why is his place so much better than mine?' 'You must understand', the angel replies, 'we get evangelists here on a daily basis, but it is a rare occasion when a member of congress actually makes it'.

This makes one wonder: are there some professions that make it harder to enter Heaven?

One of the passages many Christians treasure most is where Christ told his disciples in the closing days of his earthly life:

Set your troubled minds at rest. Trust in God always; trust also in Me. There are many dwelling places in my Father's house; if it were not so I would have told you; for I am going there on purpose to prepare a place for you.
- John 14:1 New English Bible

Another time someone asked Christ about a widow who had remarried. In Heaven whose wife was she? Christ replied:

You are mistaken and surely this is the reason: you do not know either the Scriptures or the Power of God. When they rise from the dead, men and women do not marry: but are like the angels in Heaven.
- Mark 12:24 New English Bible

In the Throne Room

The one who wrote the last book of the New Testament spoke of being caught up by the Spirit. The writer was given a preview which he describes thus:

There in Heaven stood a Throne, and on the Throne was One whose appearance was like the gleam of jasper and carnelian; and round about the Throne was a rainbow. In a circle about this Throne were 24 other thrones and on them sat the 24 elders... In the centre, round about the Throne itself were four living creatures... by day and by night they sang: Holy, Holy, Holy, is the Sovereign Lord of all... As often as the living creatures give glory and honour to the One seated on the Throne, who lives forever and ever, the 24 elders fall down and worship Him.
- Revelation 4:1-9 New English Bible

The ancients viewed the world as sitting beneath a huge dome which they called the firmament. On the under-surface of this dome, lamps (stars) were affixed by some supernatural deity.

Where they saw clouds drift across the sky, they called this region Heaven. When planets or the sun changed position they were said to be moving in the heavens. And behind that dome they believed God sat, watching.

Today we know that we live on a planet. Above the planet is an atmosphere less than 300 miles (480km) thick. Above that is a universe so vast that light sometimes takes billions of years to reach our telescopes. Where is Heaven? Certainly not out there.

According to the Catholic Encyclopedia (1917) the word Heaven comes from the Anglo-Saxon heofon which probably means 'cover': in other words, the roof of the world. The Latin word for Heaven, Coelum, has a similar derivation. However, the Old Testament references use a different word which translates to 'on high'.

Naturally this place is held to exist, not within the Earth, but, in accordance with scripture, without and beyond its limits. All further details concerning its locality are quite uncertain. The church has decided nothing on this subject.
- The Catholic Encyclopedia

The Greek Orthodox Church has language saying that the Throne of God is beyond time and space. Others would suggest that it is in another dimension or another reality.

How far away is Heaven? someone once asked. Not far, came the response. Go there now and I bet you will still be able to hear every word I'm saying. Of course the other person never took the bet.

Another question for which we have no answer is 'How much longer will Heaven exist?' As the book of Revelation is reaching its climax, John says:

Then I saw a new Heaven and a new Earth for the first Heaven and the first Earth had vanished and there was no more sea. And I saw the Holy City New Jerusalem coming down out of Heaven...the 12 gates were 12 pearls, and the streets were of pure gold like transparent glass...Then He showed me the river of life flowing from the Throne...On either side of the river stood a tree of life, which yields 12 crops of fruit...The leaves of the trees serve for the healing of nations. The Throne of God will be there and His servants shall worship Him. They will see Him face to face. There will be no night and they will need no lamp nor sun, for the Lord God will give them light.
- Revelation 20:11, 21:1-2, 21:21-23, 22:1-5 New English Bible.

Many of the references to streets of gold or pearly gates come from the description of the Holy City pictured above and may not be part of the Heaven which God currently calls home. Also there is the theological enigma about how there can be a Heaven during the 'thousand year reign of Christ on Earth' and perhaps someone, before leaving, will be posting a sign on some heavenly bulletin board:

Will the last one out please turn off the lights?