Doctor Who Enemies: Raston Warrior Robot Content from the guide to life, the universe and everything 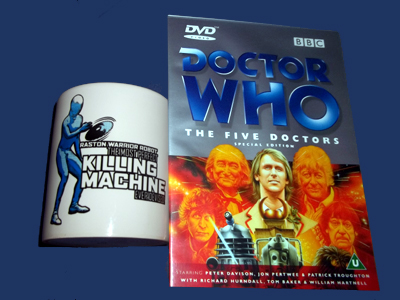 A Raston Warrior Robot. The most perfect killing machine ever devised.

Virtually unknown by anyone but a hardcore Doctor Who fan, this fast-as-lightning and stealth-camouflaged robot briefly featured in the 20th Anniversary Special of the BBC's longest-running and most famous sci-fi series, Doctor Who (1963-1989, 2005+). Although not a regular feature in the series, it deserves a mention because it spectacularly wiped out a whole group of Cybermen before they even knew it was there. For a single robot to wipe out a group of near-invincible mechanical humanoids, experts of ambush and fighting who were among the Doctor's deadliest foes, is magnificent.

In more than 50 years of Doctor Who, the Raston Warrior Robot was onscreen for under three minutes, and much of that time it was unseen. Whether it was invisible, perfectly camouflaged, or moving quicker than the human eye can follow as it teleported from location to location, remains unknown. All that we know is that whenever the robot gymnastically jumped into the air, it would appear to disappear and reappear elsewhere.

What Was the Raston Warrior Robot?

The origins of the Raston Warrior Robot are unknown, and it is unclear whether it was a single entity or if there are more of them. All that is known is that it is a tall, thin, human-shaped silver robot with a shiny silver egg-shaped head. It is also the most perfect killing machine ever devised and can move like lightning. The robot was encountered by the Third Doctor and Sarah Jane Smith in the Death Zone on Gallifrey, guarding the entrance to an underground system of passages leading to Rassilon's Tower.

The Raston Warrior Robot was equipped with circular blades, razor-sharp javelins, thick rope-like thread that could wrap around its victims and incredible in-built sensors that could detect the slightest movement or sound. It would use its stealth to unexpectedly appear out of nowhere and fire its blades or javelins at the source of any sound or movement. These bizarre but marvellously effective weapons were contained unseen within the robot's arms. Any counterattack would instantly be detected by the robot's sensors, resulting in it vanishing and re-appearing elsewhere, catching its enemy off-guard. The Third Doctor and Sarah Jane used the Cybermen's timely distraction to escape, finding an alcove nearby that was filled with more of the robot's weapons as they fled.

The Raston Warrior Robot was created by former Doctor Who script editor Terrance Dicks, for the 20th Anniversary special, 'The Five Doctors,' in 1983.

This special featured the first five incarnations of the Doctor1, who are taken out of their respective time streams by a forbidden Time Scoop and trapped in the Death Zone, a huge, ancient, deadly games arena on Gallifrey where various alien races once fought to survive for the amusement of the Time Lords. Each Doctor is accompanied by at least one of his companions2.

The Third Doctor and Sarah Jane Smith are pursued by a Cybermen patrol when they encounter the Raston Warrior Robot. In order to avoid its attention they remain perfectly still and silent until the Cybermen arrive. The Warrior Robot considers the Cybermen a threat and attacks them, allowing the Doctor and Sarah to use this distraction to escape. At the episode's end, the Raston Warrior Robot presumably remains where last seen, stealthily hunting anything it encounters in the Death Zone.

'The Five Doctors' (1983) was written by Terrance Dicks and directed by Peter Moffatt. Anthony Ainley was the Master and President Borusa was played by Leonard Sachs. David Banks was the Cyberleader, Mark Hardy was the Cyberlieutenant and John Scott Martin operated the Dalek. The Raston Warrior Robot was played by Keith Hodiak. It was originally broadcast on 25 November, 1983, as part of Children in Need, and was one of the very first BBC DVDs to be released, back in 1999.

The Raston Warrior Robot has also briefly appeared in a few spin-offs in addition to this television episode, including Doctor Who novels.

Terrance Dicks authored the novelisation of 'The Five Doctors', published by Target Books in 1983. The Raston Warrior Robot is introduced on page 77 and is described as

...some kind of robot. Basically man-shaped and very tall and thin, it had a smooth, shining body surface in gleaming metal. Its head was completely blank, a metal egg, with no eyes or mouth. Its movements were lithe and graceful, like those of a trained athlete.

In the novelisation we learn how the Raston Warrior Robot fights by throwing javelin-like steel rods or wielding a sword-blade from its hand. It also has a store consisting of steel lances, razor-edged spinning discs and coils of metallic thread. It has movement-detecting sensors and moves like lightning. The Doctor and Sarah Jane survive it by staying still, as it hunts by movement, until it is distracted by a Cybermen platoon. As the Cybermen attempt to destroy it, they are picked off one by one.

This 1997 novel by Terrance Dicks was the first in the BBC's range featuring the Eighth Doctor and the Raston Warrior Robot appears in it. Mentioned on pages 161-2, 165-173, 179-183 and 187, the same robot is still initially guarding the same rocky pass that the Third Doctor and Sarah Jane Smith travelled along in 'The Five Doctors'. Later, when the Fifth Doctor is playing cricket with Tegan and Turlough, it is Time Scooped to their location by an enemy wanting to kill them. As the Doctor and companions are forced to lie still in order to avoid being detected, readers learn that the robot was programmed to kill anyone who came into range. On page 168 the Doctor states that:

No-one knows [who made the Raston Warrior Robot]. According to legend, it was created by a race that was old when the Time Lords were young. A race that devoted all its great powers to war and the creation of super-weapons. They vanished without trace – probably destroyed themselves...
It feeds on the atomic radiation in the atmosphere, so it never runs down. It can convert energy into matter, and it moves like lightning... It was designed as a guard robot and it's got fixed behaviour patterns. It chooses a patch of territory and defends it - and it interprets all movement as being hostile.

The Fifth Doctor survived the encounter when another of the Doctor's incarnations appeared. As the robot's sensors detected that both Doctors were the same person, it therefore believed one target was in two different places at once, which caused its circuits to overload and temporarily shut down. After later defeating an attack by Sontarans, the robot survives decapitation and maintains its lonely vigil.

Destiny of the Doctors

The Raston Warrior Robot briefly appears in 1997 PC computer game Destiny of the Doctors, which featured audio recorded by Tom Baker, Peter Davison, Colin Baker, Sylvester McCoy and Nicholas Courtney. It is best remembered for the video content, which starred Anthony Ainley in his last performance as the Master.

This 2008 Tenth Doctor novel by Simon Messingham features a hunter who pursues the rarest and most deadly creatures in the universe, and now wishes to add the last surviving Time Lord to his collection. His trophy cabinet of kills includes a Raston Warrior Robot.