Doctor Who Enemies: Sil and the Mentors Content from the guide to life, the universe and everything 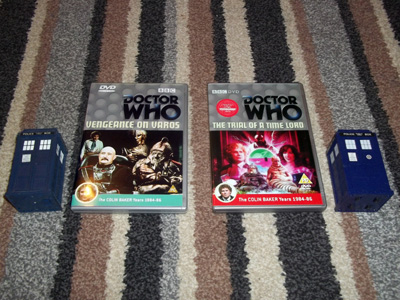 When I control this planet I will possess the means of power throughout this entire galaxy! And perhaps for all others beyond...

Sil is perhaps the most disgusting recurring creature ever encountered in the long-running science fiction series, Doctor Who. An ambitious amphibious green slug with arms, dorsal fins and a pointed tail, he is a self-centred, sadistic businessman who enjoys nothing more than gaining profit and seeing others suffer for his own amusement. When threatened, for all his bluster, his cowardly true nature comes to the fore.

At first glance he looks quite harmless, being very small and usually found sitting on his glass bubbling-green liquid water tank. Yet it isn't long before his squirming, writhing, clasping true nature is revealed. As soon as he sees someone else's misfortune Sil laughs with his tongue, sounding like Hannibal Lecter gargling with a nice Chianti.

The Mentors of Thoros Beta

Sil is a member of a sadistic race called the Mentors who come from Thoros Beta. The Mentors show no interest in conquering Earth and in fact never even mention the planet, which is unusual for a recurring Doctor Who monster.

Thoros Beta orbits its sun as a double-planet system along with its smaller, ringed neighbour Thoros Alpha. A largely water world, Thoros Beta has a garishly-clashing purple, green, pink and blue surface. The coastal area that the Doctor visits has a pink sea, lilac pebbles and mauve sky1. Among the regions of Thoros Beta are the Seas of Sorrows, Turmoil and Despair & Longing, as well as the Islets of Brak.

As well as the ruling Mentors, the planet has a variety of animals eaten by the Mentors, with mentions of flay fish, wrigglesome sandsnakes and Sil's personal favourites, marsh minnows2. Curiously, Thorus Beta also appears to be home to the xenomorphic aliens seen in the Alien films3.

The Mentors look like something of a cross between sentient tadpoles and slugs, having frilled faces, arms and a tapering body without legs. When out of the water they need to stay moisturised and remain close to water tanks or have their slaves bring them 'ambiotic fluid'. They are cold-blooded, colour blind and apparently have sensitive hearing, as at least one elderly mentor strongly dislikes loud noise.

The Mentors have a religion based around Cosmic Mega-Profit, and they believe in a god, with Sil praying to Great Morgo. For instance, when Sil insults an incompetent guard, he calls him a 'profitless fool'. The equivalent of Hell is called the Great Plague Halls of Mogdana. Despite their physical limitations they dominate their part of their galaxy, manipulating the galactic stock markets to maximise their profits. Their methods include the sale of advanced weapons to both sides of conflicts amongst primitive cultures. They also, through their company Galatron Mining, maintain a monopoly on Zeiton-7, a rare element only found on the planet Varos that is vital in the use of space-time craft, including the TARDIS, the Doctor's time machine.

According to a doctor named Crozier, there is an apparently large percentage of mutations among the Mentors. They come in various sizes, with Sil quite short compared to the other two Mentors seen, and skin colours include green, brown and tan. When they are young they have a poisonous barb at the end of their tails, though this is usually, but not always, lost before they mature. Other effects of ageing may include changes in their skin colour as well as a reduction in size of their fins; Sil's appearance changes quite noticeably between the two visits by the Doctor.

The ruler of the Mentors in the 24th Century is Lord Kiv, with Sil his sycophantic, obsequious follower. Unfortunately Lord Kiv is dying when the Doctor visits Thoros Beta, as his brain has expanded beyond the ability of his head, and he requires a new body.

The Mentors consider themselves to be intellectually superior to other life forms, and so enslave the Alphans, the humanoid natives of Thoros Alpha. Thoros Alpha is a white planet with rings, and the Alphans are a muscular, dark-skinned people that are used by the Mentors as bearers, guards and household slaves. In order to communicate with others, including their slaves, the Mentors wear translation devices which don't always work.

Sil was created by Philip Martin, who had been inspired after reading Isaac Asimov's autobiography. Asimov stated that water-based aliens rarely appeared in science-fiction, and so Sil was created to be an aquatic alien. Sil was originally intended to be seen inside the mobile water tank, rather than always sat on top of it, though this proved impractical as the water would affect Sil's make-up and the inside of a glass tank would be difficult to light.

He worked his socks off getting the character of Sil right.
- Colin Baker

Sil is played by British-Jordanian actor Nabil Shaban. Born with osteogenesis imperfecta, this left his legs underdeveloped. Despite this he was determined to be an actor and co-founded The Graeae company of disabled actors in 1980.

He dominates every scene he is in during Sil's first appearance in 'Vengeance on Varos', utilising his unique laugh, wide-eyed stare and physical movements to great effect. This was a deliberate act on Shaban's part, who wanted Sil to have a memorable and scary laugh that would make children hide behind the sofa. Shaban gives a captivating performance despite his costume. Quickly made shortly before 'Vengeance on Varos' was filmed, in some scenes the headpiece falls down almost over his eyes. This was caused by his suit's lack of ventilation, and the resulting sweat led to his headpiece becoming unglued.

Sadly his performance in his second Doctor Who appearance as Sil is toned-down, largely as a result of Mary Whitehouse's objection to 'Vengeance on Varos', which she considered to be too violent and scary. Instead, Sil appears as a comic character. His appearance also changed. Although he wears the same sculptured foam body, the costume's new head was made out of lighter foam to be more comfortable for him to wear, plus it had ventilation and a smaller head crest.

Listed below are the two Doctor Who stories to date to feature Sil.

Varos in the constellation of Cetes is a domed penal colony; however, after numerous generations the distinction between the guards and prisoners has become meaningless and only the colony's harsh punishments remain. These punishments are broadcast as entertainment. The only source of income is Varos' unique element, Zeiton-7, which is vital for all space-time craft from every known solar system. Galatron Mining, the company represented by Sil, purchases their ore at rock-bottom prices, even though this means the inhabitants are barely able to survive, in order to maximise their profit. Sil, who has bribed the System Arbiter and Chief Officer and wishes to depose the governor of Varos, now plans to occupy and rule Varos in person as Emperor, further controlling the monopoly of this precious commodity.

Sil is especially excited about purchasing tapes of what happens in Varos' Punishment Dome. All those who disobey Varos' laws are tortured or executed, with their fates broadcast on public information channels as a warning to others. Sil anticipates exporting the torture dome's videos as entertainment, a means of combining business with his sadistic pleasure.

The Sixth Doctor and his companion Peri land on Varos, desperately needing Zeiton-7 for the TARDIS. Sil fears that the Doctor is on Varos as a rival from a competing company, such as Amorb Prospect Division. The Doctor's arrival is the first step in the people of Varos coming to realise the true value of their ore.

'Vengeance on Varos' consists of two 45-minute episodes written by Philip Martin and directed by Ron Jones, broadcast in January 1985.

Following Sil's appearance in 'Vengeance in Varos' in the 1984/5 series, the character had proved so popular that there were plans for Philip Martin to bring him back the following year in a story to be called 'Mission to Magnus'. This would have seen Sil unite with the Ice Warriors. Unfortunately the 1985/6 series was cancelled to make way for EastEnders. Michael Grade, Controller of BBC 1, had assumed that no-one would notice if he quietly cancelled Doctor Who, only to be flabbergasted with front cover headlines and a protest single, 'Doctor in Distress', by minor celebrities performing as Who Cares.

Doctor Who was placed on an 18 month-long hiatus. When it returned to television for series 23, Grade only allowed the production of 14 episodes per year rather than the traditional 264. Instead of making the stories originally planned for series 23, a new story was required as it was decided to tie in each episode of the new, shorter series around the theme of the Doctor being on trial and so 'Mission to Magnus' was abandoned.

Although the television script was never finished, Target Books published a novelisation of the unbroadcast adventure in 1990. Colin Baker, Nicola Bryant and Nabil Shaban returned to play the Doctor, Peri and Sil respectively for an audio adaptation of this story in 2009.

The Sixth Doctor is on trial by the Time Lords in a space station orbiting Gallifrey. Among the evidence used against him is an adventure in which he and Peri travelled to Thoros Beta, home of the Mentors. The Doctor and Peri had learnt that advanced weapons manufactured on Thoros Beta were being sold to more primitive cultures in an attempt to manipulate the destinies of less advanced civilisations in order to gain profit. Behind this scheme is the leader of the Mentors, Lord Kiv (Christopher Ryan5), who is assisted by the obsequious, sycophantic Sil.

Lord Kiv, however, is dying and so has employed Dr Crozier, apparently assisted by the Doctor whose mind may have been altered, to perform experiments on people in order to discover a way to prolong Kiv's life. After an attempt to transplant Lord Kiv's mind into another Mentor's body fails, the Time Lords witness Crozier destroying Peri's personality so that her body can be inhabited by the mind of Lord Kiv. Both Sil and Peri's body are then killed by fearless warrior King Yrcanos (Brian Blessed) who had been the subject of some of Crozier's experiments.

Yet is the Matrix, the Time Lords' infallible record system, actually showing what really happened? It is later revealed that Peri, rather than being gunned-down by Yrcanos as shown, in fact married him and became his warrior queen. If Peri did not perish, did Sil really die?

'Mindwarp' consisted of four 25-minute episodes, broadcast in October 1986. It too was written by Philip Martin and directed by Ron Jones. The story's original working title was 'The Planet of Sil'.

Sil also appeared in an episode of Blue Peter and in an audio adventure released by Big Finish entitled 'Antidote to Oblivion'.

1Created by colouring Brighton's nudist beach using the Quantel HARRY effects compositing system.2Tinned peaches dyed green.3A Chest Burster prop from Alien appears in 'Mindwarp'.4Although Colin Baker's first full year, series 22, had been released as 13 double-length episodes, anticipating the format the series has followed since 2005.5Most famous for being Mike in The Young Ones, he has also played Sontarans.