Alien - The Film Content from the guide to life, the universe and everything 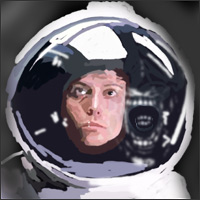 In Space No One Can Hear You Scream.

In 1979, the first of what became a series of movies was released by 20th Century Fox, to a stunned and terrified audience. Alien combined science fiction and horror in a way not seen before on our movie screens and received high critical acclaim from across the globe. Its groundbreaking style still terrifies audiences to this day.

In the far future the Space Tug Nostromo, is towing a vast refinery complex with its highly valuable mineral cargo across the stars. When it intercepts a mysterious distress call from a planet known only as LV-426, the crew comprises:

These characters are awakened from 'hyper-sleep1' by the ship's computer, 'Mother'. A bit bewildered at not finding themselves anywhere near Earth, they follow the Company2 orders and head down to the planet. Upon landing, Dallas, Kane and Lambert head out on to the surface towards the source of the distress call. What they discover is a strange and ancient alien craft.

They climb inside the massive derelict, discovering the fossilised remains of its pilot. As they explore the derelict, they discover a massive chamber filled with what appear to be alien eggs. Kane descends into the chamber and begins to study one of the eggs and it opens and a creature bursts from inside, latching onto his face. His fellow crew members take him back to the Nostromo and take off, while Ash attempts to remove the creature3 from the unconscious Kane. Unfortunately, any attempt to remove the creature either causes it to constrict its tail around Kane's throat, choking him, or causes it to bleed highly corrosive acid that almost melts through the ship's hull. Tired, the crew head for bed, leaving Kane unconscious in the medical lab. To their surprise, they awaken to find that the creature has gone and that Kane, though woozy, is conscious. While celebrating over breakfast, Kane begins to have convulsions and bleeds profusely. The crew struggle to hold Kane down. Then there is an audible bone-crunching rip and a strange creature emerges from Kane's chest4.

The creature5 dashes away before the crew can catch it and disappears into the depths of the ship. The crew give chase using a tracking device, but only come across the ship's cat Jones, who immediately dashes off with Brett hot on his tail. Brett corners the cat, but is leapt on by the alien (which has grown rapidly since emerging from Kane) and is dragged screaming to his death. Dallas then heads into the ship's ventilation system to try and toast the alien with a flamethrower, but is soon killed as well. Ripley decides to question Mother, the ship's computer, to see if it has any ideas about getting rid of their unwelcome guest, but instead discovers a secret about not only the Company's intentions for the Nostromo's crew, but also a secret about one of the crew themselves (the identity of the crewman will remain secret to avoid too many spoilers). Meanwhile, the crew is slowly picked off one by one; soon the only one left is Ripley (and Jones). Ripley decides to activate the Nostromo's self-destruct mechanism and dashes for the escape pod (grabbing Jones on the way).

The escape pod rockets away from the Nostromo, which explodes with nuclear ferocity. With a sigh of relief, Ripley prepares for hyper-sleep when suddenly one of the pipes on board the pod moves. The alien has crept aboard the escape pod. Ripley manoeuvres round the pod and puts on a spacesuit. She then opens the airlock, blowing the alien out into the vacuum of space. It tries to get back by holding onto the escape door but is soon sent off again by Ripley's harpoon gun. The alien destroyed, Ripley activates the hyper-sleep unit and settles down for the long voyage home...

The Making of Alien

Alien was originally written by Screenwriter Dan O'Bannon as an update of John Carpenter's earlier cult science fiction comedy classic Dark Star but with a much scarier monster (Dark Star's killer beach ball wasn't exactly terrifying). This script was bought by 20th Century Fox and rewritten by Walter Hill and David Giler, who tightened the story and improved the dialogue. They removed a scene inside a mysterious alien pyramid where the eggs were originally found and added the company subplot. Also, Ripley was originally a male character who was going to be played by Tom Skerritt. Until not long before production, when 20th Century Fox executive Alan Ladd, Jr suggested they change Ripley to a female character.

Production then moved on to the design department with Chris Foss, Jean Giraud and Ron Cobb designing the Nostromo ship and spacesuits, while design for the alien and its environment was handled by the famous Swiss artist HR Giger. Giger's alien has become the defining element of the movie, its sexual undertones making the design increasingly disturbing the more it is looked at. The creature's sleek, predatory design is very different to the clumsy, sluggish creatures that cinema-goers were used to in the late 1970s. It's a tribute to Giger, the special effects crew and Bolaji Badejo who played the alien, that the film was so successful and so influential.

Work on the film then stopped, while the bosses at 20th Century Fox waited to see if the public were still interested in science fiction. With the release of Star Wars in 1977 breaking every box office record, 20th Century Fox pushed production of Alien into overdrive, increasing the budget to a then staggering US$11 million. Filming then began at Shepperton Studios in the UK under the directorship of the then unknown director Ridley Scott. The set for the Nostromo was designed to be all one big piece, so that once you were on set, you felt like you were actually on the ship, adding to the realism of the cast's performance6. After an uneven filming and post-production, mainly involving disputes between composer Jerry Goldsmith and Ridley Scott over the film score, the film was finally ready for release on 25 May, 1979.

Earning over $60million in its initial theatrical run, 20th Century Fox were understandably very happy with how Alien turned out. What they didn't expect was how the public would react to the character of Ellen Ripley. Sigourney Weaver's portrayal of a strong and determined woman, who holds her own with the male members of the crew, became a role model for many young women of the time.

Over the years, Alien has inspired three main sequels, the Alien Vs Predator movie as well as numerous comics, books and computer games. Giger's Alien design has inspired many imitations and the functional, worn-out look of the Nostromo added to the already popular style in science fiction at the time. Star Wars, Alien and Ridley Scott's later film Blade Runner all used this gritty, run-down approach to science fiction and influenced many later science fiction films, computer games and comics. The success of the Alien Quadrilogy DVD box set shows there is still a lot of interest in the film and that it will keep scaring people well into the future.

Alien has often been edited for television, either for its graphic violence or for some of the swearing. Minor edits have also been made to the film on video release in some countries. But on two occasions, Alien has been released after a thorough re-editing, which resulted in curious 'alternative' visions of the story.

The version of Alien released on laserdisc in the early 1990s differed from the 1979 version in a number of ways. Most of the scenes were just additional snippets of dialogue, such as when Kane first wakes up at the start of the film, he says 'Rise and shine, Lambert'. Brett's death was slightly longer as was the tease before Lambert's (the Alien was seen to enter the room and wait for her to notice). Many of these scenes were reinstated later for the definitive 'Director's Cut'.

In 2003, a Special 'Director's Cut' Edition was released theatrically in cinemas and for home entertainment as part of the Alien Quadrilogy DVD box set. This version of the film includes a number of formerly deleted scenes re-edited back into the film. The main one of these is a scene when Ripley is preparing the self-destruct mechanism and discovers the alien's nest. In the nest the bodies of Dallas and Brett are being slowly transformed into alien eggs7. As Ripley investigates, she discovers that Dallas is still alive. He pleads with Ripley to kill him, which Ripley does, incinerating him and Brett with a flamethrower. Though this scene had also appeared in the laserdisc edition, it was completely re-edited for the Director's Cut using the raw footage left over from the original edit of the film. Significantly, the film also underwent a number of trims at Ridley Scott's insistence, as he felt that some of the scenes dragged on too long. As such, it's a curious hybrid of the 1979 original and the 1992 re-edit.

1Where the crew are put into a hibernation like deep sleep, while the ship flies on its long trek home.2The Company, later called Weyland Yutani, is the embodiment of all the evils of capitalism and is willing to do anything to save or make money, regardless of the lives it may cost.3Known by the film's production crew and later fans of the movie as the 'facehugger'.4When the scene was filmed, all of the cast (apart from John Hurt) were unaware of what was about to happen. So when the creature bursts through Kane's chest the shock on the rest of the cast's faces was genuine.5Known by fans as the 'chestburster' in its newborn form - for obvious reasons.6This set remained at Shepperton after the filming of Alien and was used in the filming of the BBC TV series of Hitchhiker's Guide to the Galaxy and the Red Dwarf episode 'DNA'. Other sections of the set were dismantled and used on other BBC science fiction shows like Doctor Who and Blake's 7.7Years on the cutting room floor meant that this transformation did not become part of the standard alien life cycle that was established in the sequel Aliens. This scene could be explained as a back-up method for creating the eggs when there is no alien queen.