Doctor Who Companions: K-9 Content from the guide to life, the universe and everything 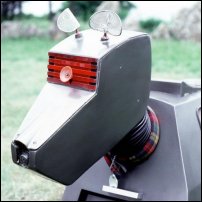 K-9 is a fictional robotic dog, created by Bob Baker1 and Dave Martin for the BBC television series Doctor Who. During the late 1970s, he was one of the most popular characters from the show, appearing for several years alongside the fourth Doctor, Tom Baker.

K-9 is equipped with everything a pre-teenage boy could want from a robot friend during the 1970s. He has a nose-mounted blaster that shoots a red laser with various settings, including 'stun'. This was most memorably used in a 'dogfight' with another robot, the Polyphase Avatron, in 'The Pirate Planet'. K-9's ears are mini radar dishes, and rotate while the computer is thinking. His tail is an antenna, which he wags when pleased. He has a tape-printer in his mouth, and a probe that extends from his forehead to allow him to interface with other computers.

K-9 has several vocal mannerisms. He refers to his owner (usually the Doctor or his companions) as 'Master' or 'Mistress'. He tends to use a pseudo-computer jargon, using words like 'affirmative' rather than 'yes'. He is also quite conceited, and will tend to avoid admitting to any failing on his own part, while being keen to point out his intelligence.

K-9 responds to an ultra-sonic dog whistle, which the Doctor keeps, and frequently wears a tartan dog-collar.

The Regular Doctor Who Appearances

Two actors played K-9's voice. John Leeson is most associated with the role, but David Brierly took it on for Season 17 (the change was explained on-screen by K-9 mysteriously contracting laryngitis2). K-9 first appeared in 'The Invisible Enemy', where Leeson's voice was electronically treated. In later stories, Leeson and Brierly provided the voice unassisted until K-9 left the show in the story 'Warrior's Gate'.

K-9 was originally conceived as being represented on-screen by a man in a costume. However, in the end a fully functional remote-controlled prop was constructed. This was notoriously ungainly, slow and noisy. It was unable to cover anything other than perfectly level terrain, often interfered with the cameras and was considered an annoyance by many of the show's cast and crew. The writers also found that giving the Doctor such a powerful ally made the programme unbalanced, and frequently resorted to having K-9 remain in the TARDIS, run his batteries down or be incapacitated early on in a story in order to preserve a sense of threat to the Doctor.

Due to the design of the prop, K-9 found it much easier to turn one way than the other, and is rarely seen to turn right on-screen.

Four versions of K-9 have been seen on-screen. The original K-9 was built by Professor Marius and remained on Gallifrey when Leela chose to remain there with her lover Andred at the end of 'The Invasion of Time'. K-9 Mark II then travelled with the Doctor and Romana until Romana chose to remain in E-Space.

K-9 Mark III was a gift from the Doctor to his former companion Sarah Jane Smith. This version of K-9 was seen in K-9 and Company (see below) and 'School Reunion'. At the end of 'School Reunion', the Doctor repaired and upgraded the unit, to give K-9 Mark IV3, which also appeared briefly in two episodes of The Sarah Jane Adventures.

Finally, another different K-9 is due to appear in its own television series. Designs for a fifth K-9 were unveiled in 2006 when the spin-off series was announced. It is not yet clear whether this new version will have an official designation or whether an explanation for his changed appearance will be given.

K-9 has appeared in numerous spin-offs. K-9 appeared in his own Christmas special, K-9 and Company, which bore the subtitle 'A Girl's Best Friend' as it had been intended as a pilot for a series that never materialised. He also had his own range of four books4, all written by Dave Martin. K-9 has featured in several of the Missing Adventures and Past Doctor Adventures (MAs and PDAs) and the Gallifrey range of Big Finish Audios. The novel Lungbarrow and the audios Zagreus and the Gallifrey series are notable for featuring meetings between the Mk I and Mk II K-9s. K-9 Mk I was destroyed at the end of Season 2 of Gallifrey. BBV also produced a range of videos featuring K-9 and 'The Mistress' (clearly intended to be Romana, but avoiding BBC copyright).

K-9 has made brief appearances in the 25th anniversary special 'The Five Doctors', the charity special 'Dimensions in Time' and Search Out Science, a one-off children's science programme.

K-9 was a big TV star in his day, featuring in (among others) two separate editions of Jim'll Fix It, making a guest appearance on Blue Peter alongside John Noakes and Shep the dog, and even teaching dog expert Barbara Woodhouse a few tricks when he appeared on an edition of Wogan.

He has also been immortalised as a toy in various forms. In 1981, Palitoy released the 'Talking K-9', which had the dog's speech recorded on a reversible mini-record. Dapol released a small K-9 model in 1987 that was 'part of a series with moveable limbs' - though how this applied to motorised K-9 was not explained. A friction-powered mini K-9 was also released to stand alongside Denys Fisher's range of 8" dolls (which included the Doctor and Leela). Since his revival in 2006, he has appeared as a friction-powered toy in scale with Character Options' 5" figures, as well as a slightly larger remote controlled figure and a stunning 1/3-scale remote-controlled model.

More recently, K-9 returned to the nation's television screens in an episode of the new series of Doctor Who, 'School Reunion' (where he is replaced by an updated version), and in the first episode of The Sarah Jane Adventures, where K-9 is rapidly written out of the script, only to return for a cameo in the final episode of the first season. K-9 is currently trapped in deep space, where he is required to constantly seal off a black hole. He can leave this task only for limited periods, returning to Earth via a portal to Sarah Jane's attic office.

1Baker went on to co-script two Oscar-winning Wallace and Gromit films.2Actually, three actors have played K-9, but only two were credited. In 'Destiny of the Daleks', K-9's laryngitis croaks were provided by Roy Skelton, who was also the voice of the lead Dalek in that story. The roles were reversed in 1988 when John Leeson provided the voice of a Dalek machine in 'Remembrance of the Daleks'.3Sometimes called K-9 Mk IIIb.4The Time Trap, The Missing Planet, The Zeta Rescue and The Beasts of Vega.