'Jim'll Fix It' - the TV Series Content from the guide to life, the universe and everything 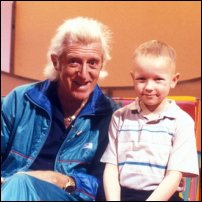 Your letter was only the start of it, one letter and now you're a part of it,
Now you've done it, Jim has fixed for it you, and you and you.

So went the classic theme tune that introduced Jim'll Fix It, a BBC television programme, hosted by Jimmy Savile, which ran from the mid-1970s through to the early 1990s. It became a fixture of Saturday evening television viewing, often sandwiched between Dr Who and The Generation Game.

Children would write in to ex-Radio One DJ Jimmy Savile asking him to fulfil their most precious wishes, and so often he did. Not only did they get to go off and do the activity of a lifetime, but then they got to meet him and be presented with their 'Jim Fixed It For Me' badge! Jim would sit in his big chair, bang his hand on the armrest and out would pop the badge. Other times it could produce a nice cup of tea if he was feeling a bit weary from the exertions of running the marathon1, or wearing all his heavy jewellery and smoking an enormous cigar.

Invariably, if the child had been on a visit to a chocolate factory or playing cricket with the England team, the managing director of the factory or Bob Willis - great English cricketing hero - would come on to give them an extra memento of their visit - maybe a year's supply of chocolate or a signed bat and a set of whites2.

After 20 years or so the format became tired and also harder to follow as the children of Thatcher's Britain grew up to expect more than being able to appear on an episode of Terry and June3.

Some of the Fix-its remembered from the show over the years include:

1Jimmy Savile was also famous for running the London Marathon for charity.2'Whites' are the all-white jumpers, trousers, shirts and studded shoes usually worn as part of the regulation cricket outfit.3This was a gentle sitcom about a married couple living in suburbia.