Wake Up To Wogan and TOGs Content from the guide to life, the universe and everything 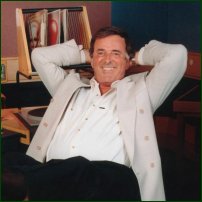 What is a TOG? Nothing to do with swimming costumes or the weight of duvets, this is an acronym standing for Terrys Old Geezers (or Gals, sometimes Gits), who are the self-named devotees of Terry Wogan's morning show on BBC Radio 2. Younger listeners, usually offspring of the TOG, are known as TYGs (Terry's Young Geezers etc).

From 1993 up until Terry's departure in December 2009, TOGs listened avidly to Wake Up With Wogan, which was broadcast from 7.30 to 9.30 every weekday morning on BBC Radio 21. The show could also be heard online, and the week's best bits were packaged into a podcast (or Togcast). Terry began hosting this show in 1993, and before that for a stint between 1972 and 1984. The show itself was the self-proclaimed home of trite drivel, and prided itself on having no 'slots' or 'spots' as other radio shows are allowed to have. Despite the absence of 'spots' various sought-after merchandise exists, including a WUTWAC2, an 'I stop for no particular reason' bumper sticker, and a 'Do I come here often?' T-shirt. The era came to an end on 18 December 2009, as the final Wake Up To Wogan was broadcast, with a billion tears shed and a million tributes flooding in.

Most of the material for the gentle banter was provided by the TOGs themselves, who texted, emailed, phoned and wrote in with observations and musings on life in general, and the previous night's telly in particular. Favourites for criticism were food programmes - all the shouting that goes on in Masterchef, Nigella's simpering and pouting, Heston's ridiculous and slavish devotion to perfection, or whichever celebrity chef catches the imagination of the TOG audience. Other TV genres which came in for the TOG savaging were the plethora of wildlife shows and DIY and gardening lifestyle programmes. Another commonly recurring theme was the difficulty of life in general, and opening toothbrush packages in particular. Listeners would often tell a sorry tale of woe which ensued when trying to open such a hermetically sealed package, resulting in some terrible injury to the opener. Often these tales involved the consumption of much Pinot Grigio. They are proud of their fondness for the colour beige, especially in a nice comfy cardie, and will ensure that their sprouts are put on ready for Christmas somewhere around the end of October.

The TOGs frequently adopt witty and often risqué pseudonyms such as Wendy Redredrobin, Anita Bush, Anna Nutherting, Edina Clouds, Clodagh Rubbish, Tansy Whitebytts. Their addresses, where used, are typically named after a lowly celeb or obscure disease, like Sciatica Mansions. One gloriously Scottish combination is Kylie Lochalsh, of Glenn Close, Kirkdouglas. And it is the usual self-deprecating style of TOGS to refer to 'your other listener'3. Other contributors include Andrew Motion, the Poet Laureate, who submits his own peculiar type of verse4, and Chuffer Dandridge, a resting actor and director who reminisces about plays, actors and playhouses he has worked with over the years, usually in some highly improbable production and with someone whose name is really a town, such as Chester-le-Street, or Milton Keynes. Other regulars include Mrs Mackay selflessly keeping the road from Cockbridge to Tomintoul clear of snow.

Aiding and abetting Togmeister Terry in this daily diatribe are The Underlings: various newsreaders include Fran Godfrey, John 'Boggy' Marsh5, Charles 'Super' Nove, and Alan 'Deadly' Dedicoat, who is often teased about his other voiceover-related careers, such as being the 'voice of the balls' on the lottery show, or announcing who's been voted off Strictly Come Dancing. Lynn Bowles is the Welsh Traffic Totty, whose forthcoming raunchy memoirs promise to rival 'Belle du Jour'. Terry and his merry band love to tuck into whatever food is available, and they perk up noticeably whenever it's national sausage week, revelling in their supply of 'snorkers'6.

The producer, currently Alan 'Barrowlands'7 Boyd also comes in for some ribbing, mainly to do with his Scottish ancestry. A fondly remembered producer is the late Paul Walters, known as Dr Wally, who produced the show from 1980 until his illness and death in 2006.

Terry himself comes in for a bit of teasing about his frequent holidays. And for his books - he has written several autobiographies, and references to them usually mention 'rare unsigned copies'. In 2007 he was voted Ultimate Icon, beating other nominees such as The Beatles and Lady Diana.

The show does its bit for Children in Need by holding the auction of things that money can't buy. This will typically be a day with a celebrity - in the ditch with Bill Oddie, or at Led Zeppelin's soundcheck, or accompanying Terry to Eurovision. In 2006 this auction raised over £500,000 for the charity. TOGs themselves do a fantastic job in raising money for Children in Need. Extremely popular are the Janet and John stories, now available on CD. These are pastiches of the eponymous children's books and are recordings of the readings on air, complete with giggling and protests from John that he 'does not skip!' They purport to tell the adventures of John Marsh, always dressed in some outlandish foppish attire, as he goes about his everyday business, but when he retells it to Janet, the double-entendres and near-the-mark ribaldry are revealed. Caution is urged when listening to these tales while driving, as the resultant snorts of laughter and doubling-up with mirth may lead to some unintentional swerving. The sale of the CDs prompted some real people power in action, as a succesful petition resulted in the government rebating the £200,000 VAT on the sales. Also available for fundraising are the Togs calendar and other valuable items.

Are you a TOG?

188 to 91 FM, hence the text number 88291.2 Wake Up To Wogan Alarm Clock.3In reality, it's the most listened to radio show in the UK.4Since the proffered verse is usually a terrible limerick, or poor rhyming couplet, it is doubtful that it emanates from the real poet laureate.5Famous for sleeping while producing the show. He also did most of the continuity announcing when Hitchhikers was a radio show, so listeners tuning in for that would hear his voice first, saying 'And now - The Hitchhiker's Guide to the Galaxy'.6Sausage butties.7Or Beryl-Ann, or barrel-hands.