'Janet and John' - the Radio Stories Content from the guide to life, the universe and everything 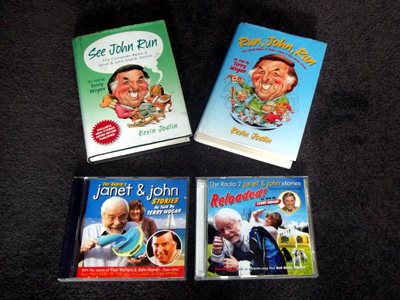 Fans of The Hitchhiker's Guide to the Galaxy radio series will be familiar with John Marsh, the announcer who introduced episodes from the very first series up to and including 2018's Hexagonal Phase. As well as introducing each episode he has frequently got the last laugh, speaking the very last line such as.

If you would like a copy of the book 'The Hitchhiker's Guide to the Galaxy please write to Megadodo Publications, Megadodo House, Ursa Minor, enclosing £3.95 for the book plus five hundred and ninety seven billion eight hundred and twelve thousand, four hundred and six pounds seven pence postage and packing.

Yet The Hitchhiker's Guide to the Galaxy is not John Marsh's only contribution to radio comedy. In fact, since the 1990s his marital relationship with his wife Janet has inspired a series of radio sketches all of their own, the infamous Janet and John stories, read by Terry Wogan.

Who is John Marsh?

According to his BBC Biography, John 'Boggy' Marsh started work for the BBC in 1965 intending to be a cameraman but soon found he had a natural voice for radio. Beginning on the World Service he then announced programmes for Radio 4 for most of the 1970s, including The Hitchhiker's Guide to the Galaxy. In 1982 he moved to Radio 2, Europe's most popular radio station, as a newsreader.

John Marsh was one of the regular underling newsreaders for the Wake Up to Wogan radio show. This was the early morning show hosted by Irish presenter Sir Terry Wogan between 1993 and 2009. It was broadcast from 7.30am to 9.30am on weekdays and was reportedly Europe's most popular radio show.

There can be few people less deserving of a reputation of a foppish lothario than John Marsh. Both he and Janet are the sort of people that you wish lived next door. Janet is no more the violent harridan than John is a lisping popinjay, but... reality is temporarily suspended for the... duration of the show when, (mostly) within the bounds of decency, anything goes.
- Kevin 'Mick Sturbs' Joslin, Janet and John creator.

One of the listeners and regular contributors to Wake Up to Wogan was Kevin Joslin, best known by his alias Mick Sturbs. A dedicated Radio 2 fan, he had helped create the website for the TOGs – Terry's Old Geezers/Gals – as Terry Wogan fans were known1. He had been contributing to the show since 1998 but it was not until late 2004 that the eureka moment came. Knowing that John lived in Sussex with his wife Janet and his hobbies included playing the pipe organ, he was inspired to write four parodies of the children's books Janet and John and send them in to Wogan's producer, Pauly Walters. The original Janet and John books were written in the 1940s-50s and were aimed at 4-7 year olds to help them learn how to read, similar to Ladybird Books' Peter and Jane Key Words Reading Scheme series from the 1960s.

The Janet and John radio stories were heavily laden with innuendo. They were read out on air by Terry Wogan, who performed as John Marsh with a distinctive lisp. The first few stories proved a huge success with both of Radio 2's listeners2 and Kevin Joslin was encouraged by Pauly to write more. This paved the way for a long-running highlight of Terry's show.

Each story lasted between 2 and 4 minutes – depending on how long Terry Wogan spent laughing mid-story while trying to read them out - and were only ever read out on air when it was John Marsh's turn to be the newsreader. They were read out regularly on Wake Up to Wogan until 2009 when Terry Wogan retired from the daily breakfast show. When Wogan instead hosted Weekend Wogan on Sundays, the stories remained a highlight of his show. The last episode of Weekend Wogan was broadcast in late 2015. Sir Terry died in January 2016.

In the stories, John is a bearded man with the mind of a child. Innocent and unaware of the adult world, his hobbies include playing the pipe organ, wearing extravagant clothing and, when allowed to go out and about, enthusiastically helping everyone he meets. His wife Janet, however, is suspicious, quick to conclude that John is being unfaithful and even quicker to attack John with a rolling pin, frying pan or whatever else comes to hand. John never understands why he has provoked such a reaction.

Most stories were set in their home Sussex village where Pastor Kidneys is the local vicar. Other inhabitants and recurring characters include Yorkshirewoman Mrs Bickerdyke who runs the suspicious-sounding Wealdstone Tan and Touch-Up Emporium, and Melanie Frontage, who runs a special shop with black windows that Janet strongly disapproves of. Other than the vicar there are very few men in the village during the day as most of the people John meets on his travels are women, which leads Janet to assume the worst.

A key point of the Janet and John stories is the way that Terry Wogan was able to tell them in an entirely inoffensive manner. It may seem a contradiction, but the way he would burst out with uncontrollable laughter while telling the stories reassured listeners that it was all innocent innuendo perfectly suitable for being broadcast when children were listening. The stories seem far ruder in text than Terry would ever make them sound.

Each story begins with a description of the bizarre outfit John is wearing today, typically something outrageously sparkly with sequins, brocaded cuffs, frills, lapels and gold braid. Janet takes John out somewhere, holding onto his reins to prevent him crossing the road unsupervised, before she has to leave him for a few minutes and makes him promise to be good and meet her a few minutes later. John then has a look around wherever he happens to be and goes out of his way to be sociable and help those he meets. For example, if he were to be at a dog show in the church hall, he would help the Pastor carry the cage containing his boxer dog puppies down the steps from the vicarage. He would then look at the other dogs in the show such as the Schnauzer belonging to Melanie Frontage, and helped her carry a heavy box of fashionable dog coats and chic accessories for sale to a table far from the church hall's entrance. He would then meet up with Janet, who would ask what he had been up to.

Unfortunately the innocent John would always phrase things wrong, and so he would tell her that he had taken the Pastor's boxers down, admired Melanie Frontage's Schnauzer and took her doggy fashion round the back of the church hall. Janet would then respond violently, with John never understanding why.

Part of the joy of listening to the stories is the anticipation of trying to work out how John's innocent actions in helping those around him will somehow sound suggestive. Many revolve around John's hobbies. He plays musical instruments, so keyboards result in references to uprights and pumping the organ. Gardening leads to numerous references to bushes and wild thyme, and woodwork, particularly making furniture, inspires comments about getting wood, tallboys and drawers.

Making the World a Better Place

In 2009 several of these stories were published in a book titled See John Run, with a foreword by Sir Terry Wogan in which he said:

The stories have also been released on six CDs and there is a follow-up book, Run, John, Run. These were sold to raise money for Children in Need3, the charity Sir Terry dedicated so much of his life to. The first CD alone raised over £1 million. Both the first and second CDs gained Gold Disc status due to their high sales. By 2011 over £4 million had been raised by these much-loved naughty stories. There can be no denying that the amusing tales of a man with the mind of a child has helped improve the lives of children all around the country. Now that's a thought to bring a smile, as well as a guilt-free chuckle.

1Younger fans were called TYGs – Terry's Young Geezers/Gals.2A running joke on Wake Up to Wogan was that they only had two listeners, or possibly three if someone tuned in by mistake. Wogan attributed his success to believing he spoke to only one.3The BBC's first children's charity appeal was launched in 1927 and aims to change the lives of, and provide practical and lasting support to, those in the UK aged 18 and under.