Conventions of Soap Opera Content from the guide to life, the universe and everything 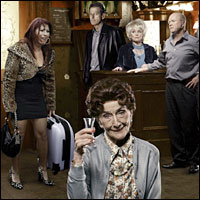 This entry focuses mainly on British soap operas, but the history, conventions and formats detailed below can also apply to other soaps all over the world.

'Soap opera' is a phrase first coined in the 1930s in the USA. It was used to describe radio series that were sponsored by the manufacturers of soap powder; hence 'soap'. The 'opera' part came from the fact that they were about dilemmas and other dramatic or melodramatic situations.

By the 1950s, these serials had made the transition to TV. They spread across the world and grew and grew in popularity.

Coronation Street is the longest running TV soap in the world, but it is predated by a radio soap, The Archers, a rural soap opera broadcast on BBC Radio 4. After the successes of glossier productions such as Dallas in America, soap suddenly became more popular again in the 1980s. This caused the inception of new British soaps such as Brookside and EastEnders. Also, the success of Australian soaps like Neighbours and Home and Away caused British soaps to reconsider their target audience and, therefore, their characters. These Australian soaps tended to be aimed at teenage viewers with characters and plots suitable for that age. British producers decided to follow suit, for example, the British soap Hollyoaks is aimed primarily at young people. This change in the target audience proved to be a very shrewd move and, consequently, soaps are now more popular than ever.

There are certain types of characters that can be seen to be common among many soaps:

Other than the theme tune, music is rarely used in British soaps; occasional cliffhangers may have a 'stock' piece of background music that will then segue into the closing theme, or else the music is in the background being played on a radio or jukebox. Occasionally, the production team might select a particularly well-chosen song for the purposes of dramatic irony. If one character is contemplating ending a relationship, for example, the audience might hear 'You've Lost That Loving Feeling' playing on a nearby radio.

Lighting varies from soap to soap, but generally it remains pretty basic - special effects are not used. This helps to create realistic light levels and adds to realism. Camera work is simplistic and generally avoids tricks of any kind: 'point of view' or 'high angle' shots are rarely used in soaps. The camera shows the action very much as a casual observer would see it if they were watching from nearby. Scenes are generally short, to avoid the audience becoming bored - two minutes or so is considered to be the maximum viewing time for one scene. Exceptions to these rules occur if a character is going to depart in a spectacular way (ie, a car crash or explosion, in which case the scene will be edited as dramatically as possible) or if the episode is a two-hander3.

British soaps tend to have a strong regional identity - for example, EastEnders is set in the East End of London, while Manchester is the setting for Coronation Street. This is not just to attract viewers from that area, but also to make it more realistic. The area in which the soap is set also has an effect on its plotting and characters; soaps set in rural areas are usually more community-based and have fewer characters than in a larger, urban-set soap.

Again, British soaps are deeply community based and usually have a central meeting point (often a pub) where all the characters meet. To draw on the examples of the two most popular British soaps: 'The Queen Vic' from EastEnders and 'The Rover's Return' pub from Coronation Street. These meeting points are featured in every episode and are often the settings for major events in the history of the soap. Their important position in the soap makes them symbols of that soap, and fans visit from far and wide to view this meeting point in real life.

British soaps deal with controversial issues such as homosexuality, drugs and underage pregnancies. These issues stir up public debate and media interest, consequently pushing up ratings and, of course, the issues themselves get more and more controversial as time goes on - what might have shocked viewers in 1960 - such as unmarried mothers - is now too tame to court attention. In recent years, producers and scriptwriters have begun to bring in characters with in-built storylines, such as serious illnesses or a dark, shady past. This provides interesting storylines from the outset, with plenty of tension. It also gets an emotional response from viewers, along with high ratings, though linking a character too closely to a storyline can often mean they outlive their usefulness once the storyline has been resolved - such as Mandy Jordache in Brookside, who was at the centre of the 'Body under the patio' story, but who disappeared soon after that story had run its course.

A birth, marriage or even a death all have a way of injecting new interest into a soap, which is useful as they're just the sort of dramatic plots that soaps use up rapidly. Illness also frequently pops up in storylines and characters help to make conditions to become better known and more acceptable. Interestingly, this has given rise to a phenomenon known as 'telly-belly'. Soap producers are anxious to ensure that all medical details are correct when it comes to these illnesses and soap fans have realised that their own symptoms are similar to those of these characters. When they visited their doctors, they have found that they too had the illness or - more often - just thought they did.

The Appeal of Soaps

Many people watch soaps because it pleases us to see and hear other people's problems, which in turn distracts us from our own. However, a soap opera has no real victims as the characters, of course, are fictional. However, we like to make guesses about their actions and reactions based on our knowledge of them. We like to see them develop as we get to know them and we enjoy learning about the complex relationships between characters. We become semi-experts on our favourite soaps, and our encyclopaedic knowledge of them, fuelled by the above points, gives us great pleasure. In a voyeuristic manner, we like to watch other people's lives, as, in the case of soap operas, they are just like ours, but more interesting.

From the point of view of broadcasters, soaps are good because they are very cheap to produce, yet have huge audiences and can, therefore, generate huge revenues. They can often run for years without coming to an end - Coronation Street is more than 40 years old. Sets are used again and again, special costumes are not required and little or no location filming is ever needed. They are also quick to produce - each minute of recording taking only one hour to film. This may sound like a lot, but on film sets, it can often take days just to successfully direct a mere few seconds of action. Not all soap operas are successful - there are some which do not catch the interest of the viewers and end up being dropped after a few years (sometimes less). Albion Market and the revival(s) of Crossroads are examples of these.

Channels maintain an unspoken agreement that their soaps are not scheduled for the same time. This is because a planned ratings war would not help either broadcaster, as has been proven by past experience.

Advertising slots in soaps are expensive to purchase, but guarantee large numbers of viewers seeing the advert. There are also numerous opportunities for the programme makers to sell themed items based on their soap; this merchandising can be expected to have a very large market.

As well as BBC productions, there are the following:

1Perhaps the best example of this is the BBC soap EastEnders which, when it changed the arrangement of its opening sequence and music in the early 1990s, received so many complaints that the producers were forced to commission a new arrangement much closer to the original.2The recent revival of Crossroads broke this golden rule by not only camping up the drama, but also by revealing in the final episode that - the horror! - the entire series had been a fantasy imagined by one of the characters. This is a cardinal sin for soap fans, who still remember the farcical, shower-related revival of the very deceased Bobby Ewing in Dallas.3A two-hander is an edition that focuses solely on two characters for the purposes of exposition and character development, which will often feature much calmer, slower-paced direction and editing so as not to distract from the more involving dialogue.