George Orwell - Author Content from the guide to life, the universe and everything 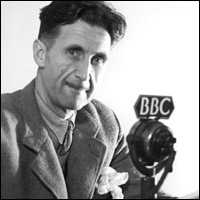 The English writer and journalist George Orwell lived through a busy, traumatic period in 20th Century history, much of which he experienced at first hand: the declining years of the British Empire, the Great Depression, the Spanish Civil War, the rise of fascism in Western Europe in the 1930s, World War Two, and the early development of the Cold War. He is best known today for two novels Animal Farm (1945) and Nineteen Eighty Four (1949) - two sustained, reasoned, anti-communist polemics that also make some scathing criticisms of Western society and its values. Orwell's work, while its influence has perhaps now faded a little, has been a staple of the post Second World War era. The expressions 'Big Brother is watching you' and 'Thought Crime' from Nineteen Eighty Four are now firmly embedded in Western culture.

A Brief Life and Times

Orwell, real name Eric Blair, was born in 1903, in to what he later described as the 'lower-upper-middle class' of English society. This is what we might call the 'admin section' of Imperial Britain; at once servants of the real British 'elite' and yet almost completely insulated from the harsh realities of life as experienced by the majority of the population at this time.

He spent his early years being groomed for a career in the civil service, but he became disillusioned in the late 1920s, and instead spent a few years living around the working class districts of London, Paris, and north west England. His observations at this time formed the basis for his early writings, such as Down and Out in Paris and London, and The Road to Wigan Pier.

Politically, Orwell was a part of the syndicalistic ('free socialist') movement that believed that there should be no State control over people. In this model, companies are owned by the workers, and people are inspired to think for themselves, learn by their mistakes, and understand the world in which they live.

Like many Left-leaning writers and intellectuals of his time, he went to Spain in the 1930s to fight against Franco's fascist army. He was wounded in this war, and it seems he never quite fully recovered. The injury seems to have been a principal factor in his death from tuberculosis in 1950, while he was still only in his mid forties. His experience during his time in Spain inspired him to write Homage to Catalonia.

Orwell was also a sharp observer of English society and culture. He saw the English as a mild-mannered if slightly insular people, characterised by an aversion to extremism and a general faith in 'common sense' over abstract philosophical ideas, which tend to be associated more with thinkers from the continental mainland. He was critical, however, of any romantic notion of England as a nation that was in some way united, as was often said of the British people, especially during periods of national crisis such as wartime. Orwell saw this 'unity' as an illusion. In Orwell's own words;

England is the most class-ridden country under the sun... It is a land of snobbery and privilege, ruled largely by the old and silly1.

Orwell, however, was at times susceptible to many of the weaknesses he identified in the English mentality. While he largely despised the decaying imperial order into which he had been born, he seemed in some respects unable to overcome the confines of his own education. At times, Orwell revealed prejudices of his own against anyone deviating from a rather narrow, personally defined norm. This seems contradictory, bearing in mind his distaste for the insularity he often saw in his fellow country folk, and also bearing in mind his fierce defence of the principle of individual liberty. He once wrote, for example, that in his schooldays, there had been 'no notion that the working class were human beings'. While he could sympathise with the plight of the poor, from a safe distance, he still, ahem, 'despised them when I came anywhere near them'.

Orwell was an intriguing, rather paradoxical individual; an upper-middle-class 'man of the people' who tried, through the course of his life, to overcome the prejudices that his upbringing had educated him into. Although traces of Orwell's England can still be seen today, half a century later, England appears to be a more open, multicultural society, and it would be fair to say that the passing of the more old-fashioned notion of 'Englishness' is largely unmourned. He is perhaps best studied today from a historical perspective, as someone who was on the scene with his own idiosyncratic insights to offer on many of the key turning points in 20th Century history.

Orwell retained a life-long commitment to democratic politics and was against authoritarianism of any variety. Unlike many of his contemporaries on the left of the political spectrum, he had no time for the communist experiment in the Soviet Union, in particular during its Stalinist period. He predicted (correctly of course) that such a system could never last under such conditions, and he set out in his two great novels to show how the two political extremes of the time - communism on the left, fascism on the right - were ultimately indistinguishable. Orwell's subject, then, was the danger of totalitarianism in general, rather than specifically from any particular social formation.

At the end of World War II, Hitler was of course cast as a monster. Stalin, however, was portrayed as 'Uncle Joe', a jovial character, friend of the Allies, who could do nothing wrong since he had helped the Allies to win the war.

The truth was, in fact, supressed. Stalin had begun as a mortal enemy, and far from being friendly, he killed millions during his purges. Worse still, to a socialist, Stalin was corrupting the idea of socialism itself, and had used communism as a means to gain personal power.

In this short, and at first sight, simple book, the animals on a farm rebel and depose the 'ruler' represented by Farmer Jones, chasing him off the farm. The revolution is led by the pigs whose leader is Napoleon, a boar representing Stalin.

At first, all of the other animals get an equal say, and live by a series of maxims proposed by Old Major, another pig who represents Marx. However, the pigs gradually gain control, starting with the appropriation of extra food, followed by their dominance at meetings, their move into the farmhouse, and so on and so forth.

Old Major's original commandments, which are painted on the side of the barn, are slowly altered to confound those few animals who are intelligent enough to notice the changes. Most, however, are conformist and easily brainwashed by the pigs. Boxer's (the horse) motto says it all: 'Napolean is always right'.

The one animal who sees through what the pigs are doing is Benjamin the donkey, but he refuses to say anything but 'Donkeys live a long time. You've never seen a dead donkey'. Benjamin is often seen to represent the intelligent cynics in the world, and the analogy can be taken further to correlate the donkey with Orwell himself.

The book is set in Orwell's future, where all the countries of the world have amalgamated into three warring superpowers. The main character, Winston Smith, lives in the state of Oceania under the tight control of the Party, Ingsoc2 and its mysterious leader, Big Brother. English has been subsumed by a new language, Newspeak, which is yet another weapon in the arsenal of a party well versed in mind control.

Winston works for Minitrue3, where his job is to change written documents such as newspapers to make it appear that the Party have always been right. He becomes wise to what the Party genuinely stand for and becomes connected with revolutionaries, but the plot remains one of despair and hopelessness against tyranny.

The book, like Animal Farm, was also inspired by the rise of Stalinism. In a time when Stalin was being romanticised as a friend to the common man, Orwell had the insight to recognise the dictator for the blood-soaked thug he was, and the courage to tell a gullible world the truth. To emphasise that an urgent battle was raging for the soul of Western Civilisation, he originally planned to call the book The Last Man in Europe.

Writing the book became a race against time. Orwell feared that some calamity might erupt and cause the Cold War to grow hot - and his disease was catching up with him. At the end of 1948, he was so weak that he could hardly sit up. With his old manual typewriter awkwardly positioned on his lap, he spent hours banging away on the machine, coughing and spitting up blood.

The book only became a success after he died, although it is now world famous and has been heralded as one of the best books of all time.