'Blackadder' - the TV Series Content from the guide to life, the universe and everything 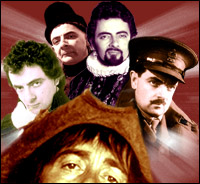 Blackadder is the general name for any one of the four BBC TV sitcoms and a number of one-off specials based around the life of Edmund Blackadder. Each series is set around a particular historical period, and follows the lives of different Edmund Blackadders, each one a direct descendent of the previous incarnation.

The four series are written by Richard Curtis (series one to four), Rowan Atkinson (series one) and Ben Elton (series two to four)1.

In each incarnation, Rowan Atkinson plays the main character of Blackadder. The only other character that is present in all four of the series is Blackadder's sidekick, Baldrick, a not-too-clever, general dogsbody2, played by Tony Robinson. Other actors consistently appear in all four series, Tim McInnerny, for example, but none play the same person throughout.

The four series each have their own unique quality, and this is partly because Blackadder's personality is subtly different in each one, but still manages to retain the same overall character. The first series is by far the most flamboyant production having a large cast and many elaborate sets. Although the three following series had much smaller casts and were mostly studio-based, it was said of series four that it was, when it first shown in 1989, probably the most realistic.

It is Europe, 400 years ago. In Spain, war rages, as Christians from every land fight off the threatening terror of Turkish invasion. The French... are in uneasy peace. But in England, under the tutelage of a powerful king, the Ship of State ploughs a steady course as the court awaits the Queen's birthday and the return of a Scottish hero from the war...

As is the norm for TV production, Blackadder began with a pilot episode. A pilot is a test-run for a show to see how a series might work. Sometimes, the pilot becomes the first episode of the transmitted series, while other times, as in this case, the pilot is remade completely, though the remake might retain many elements from the pilot. This pilot was reworked as 'Born to Be King', the second episode of series one, The Black Adder.

The backdrop to the series is fairly vague, set some time in the 16th Century in the house of an unspecified king. The central character is also still clearly a work-in-progress as Atkinson's portrayal slides uneasily between the oily worm of the first series and the sarcastic master planner of the later episodes.

The pilot episode ends with a shot of the Blackadder family crest, which bears the motto: 'Veni, Vidi, Castratavi Illegitimos' - we came, we saw, we castrated the b******s...

Fans of the series will notice that the biggest change between the pilot and the transmitted episode was that Baldrick was not played by Tony Robinson. While Elspet Grey and Tim McInnerny would return for the full series, John Savident (now best-known for playing Fred Eliot in Coronation Street, would be replaced by Brian Blessed as the King.

One final element missing from this first run at the concept is the distinctive theme tune, though Howard Goodall does in fact contribute the show's music.

Series One - The Black Adder

This series starts in 1485, under the reign of King Richard III and chronicles the events surrounding Edmund Blackadder, second son of Richard, Duke of York. The story runs through to 1498 to the end of the forgotten reign of King Richard IV (who followed Richard III, as played by comic legend Peter Cook). Blackadder's full title is Edmund, Duke of Edinburgh and Warden of the Royal Privies, until the final episode where he is relieved of his duties in Edinburgh.

Apart from Blackadder and Baldrick

The other person to watch out for in the cast is the Jumping Jew of Jerusalem played by Angus Deayton3 in the episode 'Born to be King', though is probably best-known for hosting Have I Got News For You and appearing as Victor Meldrew's neighbour in One Foot in the Grave.

The second series takes place in the time of Queen Elizabeth I. The Queen is depicted as a ditzy monarch with a penchant for strange dreams involving horses. Lord Blackadder, as he is in this series, is a close friend and favourite of the Queen. From series two onwards the episode titles follow a particular style which remains throughout each series.

It is also worth looking out for Lord Flashheart (Rik Mayall of The Young Ones fame), Sir Walter Raleigh (Simon Jones, Arthur Dent from The Hitch-hiker's Guide to the Galaxy), and Prince Ludwig (Hugh Laurie, who becomes a regular member of the team from the third series on). The last episode in this series is probably the most confusing as no explanation is given for the Epilogue. In this episode, Blackadder and Melchett are kidnapped by the evil Prince Ludwig who is a master of disguise and has slept with most of the characters in the past. The epilogue shows the corpses of the Queen, Blackadder, Melchett et al and Prince Ludwig dressed as Queen Elizabeth I. Very strange.

In series three, Blackadder is somewhat reduced in status and is butler to Prince George, the Prince Regent, during the reign of King George III. Prince George is a man with a large number of socks, 432,507 pairs to be precise, and is described by Blackadder as having 'a brain the size of a weasel's wedding tackle'.

Probably the most important thing about series three is that it is the only one where Blackadder does not die in the final episode. It's also the first time that we hear Baldrick's first name - Sod Off.

The cast list is again reduced now to only 25 for the six episodes whereas in series one there were 68 cast members. However the number of now quite well-known actors is rising. There are only two regular characters in this series apart from Blackadder and Baldrick

There are several people to look out for in single episode appearances in this series.

This short sketch was created for a Comic Relief telethon in the spring of 1988. Planting our heroes in the Civil War, the episode features Stephen Fry as a King Charles that bears more than a slight similarity to a certain HRH Charles...

Set in the Victorian Era, this special from Christmas 1988 sees the kind, generous and humble Edmund taken for a ride by his family, his neighbours, some enormous well-fed orphans and even Queen Victoria herself. But when Edmund is visited by a series of ghosts and shown some of his ancestors, as well as two possible future versions of himself, he mends his ways and becomes the spiteful, sarcastic, self-serving Blackadder we all know and love...

As well as some of the regulars from the series, the special saw appearances from Miriam Margolyes and Jim Broadbent, who had both appeared in the first series episode 'The Queen of Spain's Beard' (Margolyes also appeared in the second series episode 'Beer'). Also of note is Nicola Bryant, who had previously played Peri, one of the companions of Doctor Who, while Erkan Mustafa, who here plays one of the enormous orphans, had played the hapless Roland Browning in Grange Hill.

This, the final series, is set during the First World War some time between the years 1914 and 1917. Blackadder is a Captain in the British army, having joined in 1888, and is now stationed on the front line. His commanding officer, General Melchett, has his HQ conveniently situated 30 safe miles away, and Blackadder is frequently summoned there, where he entertains himself by baiting the long-suffering Captain Darling.

Blackadder spends the series finding innovative ways to avoid 'going over the top' and fighting. The final episode in the series, 'Goodbyeee', doesn't follow the pattern of other episodes, the reason for this becomes apparent when you actually watch it. The final scene shows the central characters going into battle and to certain death. Ending with a still of the battlefield slowly fading into a field of vivid red poppies, the scene is quite moving and has made it into the top ten of 'most memorable moments of television'.

This series has the smallest cast list numbering only 17, however most of the cast are now well-known actors or comedians.

Also worth looking out for are

Blackadder - Back and Forth

The final instalment of the series is Blackadder - Back and Forth which shows our anti-hero zipping through time. Premiered exclusively at the Millennium Dome, London, it was subsequently released on home video and DVD.

After a dinner with some friends on New Year's Eve, 1999, Blackadder shows off his invention - a time machine. Though his friends mock him, Blackadder bets them all he can retrieve a number of objects from history. Aided by his loyal manservant Baldrick (who was the real inventor of the machine, based on some sketches he found in a book about Leonardo Da Vinci), Blackadder finds himself in a race through time as he tries to find all of the objects before 1999 becomes 2000...

Aside from a few small sketches (including one for a gala in honour of Prince Charles' birthday), this is the last we've seen of Blackadder. Though rumours have circulated for many years that the 'next' version might be the manager of a 1960s pop back called 'The Black Adder 5', so far this has yet to be confirmed. For now, we'll have to be content with the past, where Blackadder has always seemed at home...

1These three gentleman are, respectively, the writer of Four Weddings and a Funeral, the rubber-faced Mr Bean, and the writer of the West End play Popcorn.2A dogsbody is a English slang term for someone who is given all the boring mundane jobs.3A British comedy actor who pops up regularly in comedies written by Richard Curtis. He also played the Treasurer in Elizabeth starring Cate Blanchett.