The History of Marks and Spencer Content from the guide to life, the universe and everything 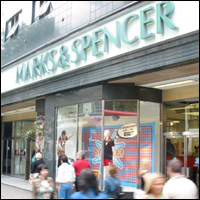 Marks & Spencer, known to a lot of people as Marks and Sparks or M&S, is one of the UK's leading retailers, with over 600 stores in the UK and over 200 more in 40 other countries. Although perhaps not the most fashionable place to shop, M&S is well known for both its quantity - basic clothing comes in most colours, sizes and styles - and its quality - particularly in the Food Hall, where the produce is often considered superior to that in many other supermarkets (but is accordingly more expensive). They have so many outlets today that it is surprising to know that it was just a market stall a little over 100 years ago. Since then, a lot of things have happened to it to make it into the phenomenon it is today.

The Beginning Of A New Business

Michael Marks founded the business from humble beginnings. Born in Slonim, Russia in 1859, he emigrated as a young man to Leeds, where he joined a company that employed refugees. He was taken on by the warehouse owner Isaac Dewhurst, who employed Marks to sell goods to the surrounding villages.

In 1884, Marks started his own business - a penny bazaar stall at Leeds Kirgate market. As soon as this was established he was looking to expand. He opened a shop at 20 Cheetham Hill Road, Manchester, in partnership with Tom Spencer, a former cashier recommended by Dewhurst, and then opened another in Cross Arcade, Leeds, marking the change from a market stall to a wealthy business.

Neither founder survived long into the 20th Century: Spencer died in 1905 and Marks two years later. William Chapman took the helm until 1916, when Michael Marks' son Simon became chairman. Ten years later the business was floated as a public limited company. Marks Jr was to remain in charge until 1964, when Israel Sieff took over as chairman.

Under Simon Marks' stewardship, the business grew into a retail empire, acquiring other chains of penny bazaars across the country, and introducing many of the lines which the store is still associated with today. Textiles were first sold in 1926, and food and canned goods from 1931. The famous St Michael trademark first appeared on textiles in 1928, and then spread to other goods, including food in 1941. It had replaced all other brands by 1956.

During the 1930s, Marks & Spencer introduced a number of innovations. It has been seen by many as a good company to work for, and in 1933, Simon Marks commissioned Flora Solomon to set up an employee welfare service, which provided a range of services from pensions to camping holidays.

During this period many new synthetic materials were coming on to the market. In 1934, Marks & Spencer became the first retailer to open their own scientific research laboratory to develop and test new fabrics.

From 1935, Marks & Spencer's café bars produced cheap, hygienic and nutritious mass catering, something which became popular at the time of food rationing during the Second World War. The business was always looking for new ways to produce food and clothing that would fit into the wartime specification but still retain their standards. After the war, in 1948, they held a food self service trial and this, too, was a success.

One phrase which has become synonymous with the store is 'you can always take it back'. Marks & Spencer's no-quibble exchange or refund policy was introduced in 1953. This was particularly welcome as stores did not have fitting rooms - these only appeared towards the end of the 1970s.

In 1959, Marks & Spencer became the first retailer to introduce a no-smoking rule, and in 1961 they banned dogs, with the exception of guide dogs, for hygiene reasons. Food sell-by dates first appeared in 1970.

Many of their best-known food lines were introduced in the 1970s. In 1973, they started selling wine for the first time, and a year later, Indian and Chinese meals, using some of the recipes we still eat today.

The 1980s were a very profitable period for Marks & Spencer. In 1986, they introduced funiture in their stores, and in 1988 they became the first British retailer to make a pre tax profit of £1 billion. Also in this year they became truly international by opening a flagship store in Hong Kong1.

In 1999, they launched a new website, opening a new era in online shopping. Moving into the 21st Century, Marks & Spencer successfully launched a number of branded clothing ranges, including Per Una for women, and Blue Harbour and Autograph for men.

It was not always possible to meet everybody's expectations of quality, however, and one complaint in particular came from a very unexpected source. A private e-mail from Jeremy Paxman, BBC Newsnight and University Challenge presenter, was leaked to the press with his claim that their underpants 'no longer provide adequate support'. It went on to describe his friends' 'widespread gusset anxiety'. Paxman did settle the issue in a personal meeting with Marks & Spencer boss Stuart Rose, but the episode earned him no little ridicule from fellow journalists.

The perceived drop in quality, as indeed much of the retailer's commercial success could be put down to its global sourcing of products. In 1999, Marks & Spencer published a code of practice for global sourcing to improve conditions for workers overseas, and in 2006 launched the Look Behind The Label campaign to describe the wider ethical credentials behind each product.

Not only that, but in 2007, Marks & Spencer launched their most ambitious ethical campain to date: the five-year, 100-point eco-plan known as Plan A2. Its five main goals are continually measured, and progress is reported on their website:

Despite seeing an 18% fall in the share price 12 months into the plan, Marks & Spencer have pledged commitment to it. In May 2008, the store introduced a 5p charge per plastic bag, with the profits going to the charity Groundwork UK. Six months later, the result was an 80% reduction in plastic bags and £500,000 raised for the charity. Plan A has been welcomed by many concerned with saving the planet and we can only hope that other stores will follow in Marks & Spencer's footsteps.

1Their first store outside the UK was opened in Dublin in 1979.2So named because 'there is no Plan B'.