Plastic Bags and the Environment Content from the guide to life, the universe and everything 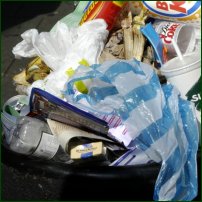 The average plastic carrier bag is used for five minutes, but takes 500 years to decompose1.
- DEFRA, the Department for Environment, Food & Rural Affairs.

Billions of plastic bags are thrown away in Britain every year, most of which are used only once before disposal. In a survey2 in March 2005, 36% of those asked admitted to throwing away 'vest'-style plastic bags after one use. On average, people surveyed admitted to using roughly eight bags per week.

Plastic bags take up huge amounts of space in our country's landfill sites, space that could be used much more effectively. Many carrier bags end up as unsightly litter in trees, streets, parks and gardens which, besides being ugly, can kill birds, small mammals and other creatures. Bags that make it to the ocean may be eaten by sea turtles and marine mammals, who mistake them for jellyfish, with disastrous consequences, or may end up drifting into the 'Doldrums', an area of the world's oceans that have become the final resting place of much of the world's floating junk.

In many countries within the EU, supermarkets (and even governments) charge for carrier bags, which serves as a deterrent to overuse and wastage. For example, in Ireland a normal plastic bag bears a government tax of 15 euro cents4. Irish people would happily pay for a bag, but begrudge the government any form of tax. Even non-EU countries, such as Croatia, levy a charge for carrier bags of 1 Kuna per bag5. In some countries, such as France, supermarkets do not provide any kind of disposable bag, instead offering reasonably priced, good quality, re-usable bags.

These methods give people more of an incentive to re-use plastic bags than just feeling good about saving the planet. Many British thinkers believe that if a system like this was introduced by an individual major supermarket chain, it would spread to all the others.

Some shops in Britain are starting to do something about the problem. For example, IKEA are charging five pence for carrier bags, following the success of the bag tax in Ireland. Tesco and the Co-op now use biodegradable bags. The bags at the Co-op are printed with the message 'Britain's first 100% degradable plastic carrier bag… This bag is 100% degradable but it can still be re-used.' Bio-degradable carrier bags are a step in the right direction; however, they still take a lot of energy to produce and don't decompose safely or instantly. Tesco have also had another idea: they give 'Green' Club Card Points to customers who re-use carrier bags in store or that give bags back to delivery drivers.

All this shows that supermarkets are prepared to make some changes to adopt 'greener' values by offering people something for re-using bags, giving every customer an incentive.

Although something is being done, there is still a long way to go before the shops in Britain are environmentally friendly, in terms of plastic bags. Not one major supermarket (such as Tesco, Morrisons or Asda) charges for carrier bags, and many chains are doing nothing at all.

In non-supermarket shops - such as Marks and Spencer - or even the express checkouts of supermarkets, it is quite difficult to re-use your plastic bags, as before you can say 'No thank, you I've brought my own bag', they will have put your shopping into a plastic bag and given it back to you. This is a problem of some concern, as people may be driven away from re-using plastic bags since they would have to be quick and assertive with the shopkeepers, something they might be afraid of doing. If, for example, shopkeepers were to put the carrier bags on the client side of the desk and let them choose whether or not to take them, then it would be easier for the nation to re-use plastic bags. Another idea for small local shops is to collect carrier bags which people don't want and were going to throw away, and to re-use them in the shop, rather than buying new ones.

Who Cares About The Environment?

However, if the re-use and recycling of plastic carrier bags is to be a success in Britain, the people and the government must believe in the cause. The government could pass laws to tax plastic bags or have special carrier-bag recycling bins set up around the country. But if the British people started re-using carrier bags as normal practice, then there would be no need for the bags to be taxed or charged for. This again would come down to the government as they could run a campaign to make people re-use carrier bags or pass laws making it difficult not to - for example by not allowing supermarkets to provide them.

A small survey shows that many British people feel slightly inclined to re-use their old carrier bags, but not enough to be bothered to actually do it, as there is no real incentive or benefit for them. If carrier bags were charged for, the incentive would be there - they would save money by not buying new carrier bags. Most people don't like re-using bags, as it requires a little bit of effort which they can't be bothered to put in.

In a small survey of British people, the IKEA and Tesco policies came up again, as well as the fact that many supermarkets used to charge for plastic bags about 25 years ago but don't any more. Some people seem to believe that only heavy-duty bags can be recycled and throw away all their other bags. This would be well addressed by a government campaign, as a charge on plastic bags wouldn't stop them throwing away what they see to be 'unusable' plastic bags. However, there are many more people who believe that if plastic bags were charged for, then they would be encouraged to re-use them.

The most enlightening result of the survey came when the question was asked about the biggest problem with the plastic bags in the world today - and the most significant proportion, far outstripping any environmental concerns, complained that supermarket plastic bags were flimsy and prone to tear, and that the handle dug into your hands if you put a lot in them. A desire for short-term comfort and convenience scores over long-term waste management and environmental impact.

Given the current trend in many countries to continue providing carrier bags free of charge, you can do your bit for the environment by finding ways to use the ones you have and politely refusing the ones you're offered:

When out shopping you can take bags with you, rather than using the ones provided by the shops. As well as re-using the standard light-weight 'vest' bags, you can also use:

In an ideal world you would always refuse plastic bags, but sometimes you may need to accept one or two, either because you don't have enough bags with you or because yours are worn out. To solve this problem, you could keep a re-used bag on you most of the time if going into a commercial area, to anticipate those spontaneous purchases. The relatively thin composition of a vest bag makes it possible to fold right down to an easily pocketed size without trouble.

You can re-use plastic bags for more than just shopping. In imaginative hands, you can turn the traditional free vest bag to a multitude of new uses. Some of these will get a second use out of the bag; others will use the bag over and over again, for which you deserve to give yourself a hefty pat on the back:

An End In Sight?

On 30 April, 2007, Modbury, in Devon, became the first plastic bag-free town in Europe. Following the urging of Rebecca Hoskins, a wildlife camerawoman who had experienced, first-hand, the horrific effects of plastic pollution on animals, all traders in the town agreed to unilaterally cease providing or selling plastic bags and switch to environmentally friendly alternatives, such as corn starch paper wrap, cotton, or cloth. Following a successful six months, dozens more cities, towns and villages now intend to follow suit and ban all throw-away bags.

1Obviously, not having had plastics around for 500 years, the time to degrade represents an estimate - quoted more generally as anything between 100 and 500 years.2This entry makes various references to this survey, carried out on the subject of 'Carrier Bag Usage and Attitudes' on behalf of the Waste and Resources Action Programme.3Namely CO2 (carbon dioxide) in production and burning; and CH4 (methane) in decomposition.4Approximately ten pence.5Again, approximately ten pence.6Though most vest bags will be useless for this purpose, without a bit of duct tape or something, as they include holes to help in the avoidance of suffocation.7Take great care, avoid sharp edges and, perhaps, use a couple of shopping bags to be on the safe side.