The Daffodil Content from the guide to life, the universe and everything 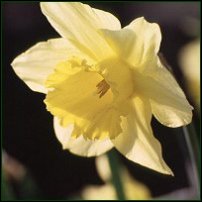 I wandered lonely as a cloud
That floats on high o'er vales and hills,
When all at once I saw a crowd,
A host of golden daffodils
– Poet Laureate1 William Wordsworth2

The daffodil to which Wordsworth refers is the tall, yellow flower with a large central trumpet. There can be no other flower which spells the arrival of spring quite so well as the national flower of Wales. The daffodil, botanical name Narcissus amaryllidaceae3, is also known as the 'Lent Lily' or 'Lenten Lily' because it is usually in bloom around that time. It's traditionally worn on St David's Day (1 March) because it is supposed to bloom first on that day.

The plant originated in south-western Europe and was first cultivated by the Romans, who believed that daffodil sap could heal wounds. Actually, sharp crystals of calcium oxalate4 in the sap, which prevent animals from eating the plant, can irritate human skin.

The Ancient Greeks planted daffodil bulbs near tombs, causing their mention in Herrick's Hesperides as portents of death. The flowers are also the reason Hades (god of the Underworld and brother of Zeus) was able to abduct Persephone – it was the daffodils (or 'asphodels') growing in his underworld that she was picking.

The original English names, Daffodowndilly and Daffodily Affodily, are corruptions of the original Greek 'Asphodel'. The French, who utilise the plant as an antispasmodic, know them as fleur d'asphodèle, and also pauvres filles de Sainte Claire.

In Victorian times, daffodils signified regard, while narcissi represented vanity. During the 19th Century, many floral dictionaries were published, and it wasn't unheard of for different books to contain alternative meanings. Woe betide the suitor who presented his love with a daffodil if in her floriograph they stood for unrequited love!

All daffodils belong to the Narcissus family; of course, legend has a story that tells of the origin of the name. In Greek mythology a beautiful youth called Narcissus was not allowed to see himself. His parents, fearful of a dire warning, banned all mirrors from their home to keep him safe. One day Narcissus went to drink from a stream and, for the first time, saw his own lovely face staring back. He was so transfixed by his reflection that he fell in the water and drowned. The benevolent gods changed Narcissus into a flower so he could stay by the water forever.

Narcissus actually stems from the Greek word narkao (numbness), referring to the narcotic properties of the plant. When Socrates talked about it, he called narcissus the 'chaplet of the infernal gods', mentioning that when applied to open wounds it produced staggering, numbness of the nervous system and paralysis of the heart. It's not recorded how many patients survived such experimental ministrations, but no doubt with grave, open wounds they were going to die anyway, so there'd be no loss to the medic's reputation.

Wild daffodils Narcissus pseudonarcissus need light to thrive. Therefore, where they do grow in woodland, it is almost invariably in coppiced woodland, where the trees are cut to the ground in a regular cycle of between seven and 12 years. Indeed, the greatest threat to the wild daffodil population has not been indiscriminate picking, but the reduction in coppice rotation and the planting of evergreen trees for timber.

The Jonquil, a species of miniature daffodil, is native to Spain and Portugal. In North America some call the narcissus 'Jonquil' but it's a separate species.

Daffodils possess 'true bulbs', in that they grow fresh roots each year. Spring bulbs evolved as a means of coping with the extremes of temperature between summer and winter, so they essentially 'hibernate' underground. Growth starts in the autumn, and for this reason, daffodil bulbs are best planted in August. Daffodils use the brief period of spring, when melting snow provides moisture, and the Sun is not too hot to prevent the plant growing above ground, to flower and set seed. As a further aid to survival, daffodils have developed a fleshy, swollen root stem as a way of storing energy underground, this providing the plant with all the energy it needs to grow and flower the following season.

The bulbs are disease-resilient and indigestible to gnawing animals like rabbits. They are also poisonous; in fact all parts of the daffodil are poisonous, not just the bulbs. There have been some reported causes of death by daffodil poisoning when the bulbs had been mistaken for onions. Dogs should be prevented from digging the bulbs up to eat them.

Daffodil bulbs should be planted at least three times their own length in depth. Be sure the bulbs don't touch each other in the ground. A handy bulb planting tool that cuts a core out of the ground into which you put the bulb can be bought from a garden centre. Or you can use a hand trowel or spade which might be easier if the ground is hard or compacted.

One pest to beware of is the hoverfly Merodon equestris, which will lay its eggs near the bulb and whose larvae will burrow into and feed upon it, devastating the bulb while suffering no ill effects themselves. This pest causes serious bulb damage in the south of England and Holland.

Some varieties make perfect potted bulbs for the home: go for the stronger-scented ones like Soleil d'Or (Golden Sun) or Ziva, a multi-headed paperwhite.

There are now over 25,000 varieties in shades of yellow, white, orange and peachy pink. The smaller white varieties are scented, and some are multi-headed. When you have a garden full of daffodils, pick a few and arrange them in a vase, checking first that there are no bugs in the trumpets. They won't last as long as your garden ones but they will definitely brighten your home. Be aware that the sap is toxic to other flowers, so don't mix them in the same vase as tulips.

However, don't enjoy them in the way that Stan Laurel did in one of the Laurel & Hardy films! The lovable clown pulled out some daffodil stamens and ate them in front of Oliver Hardy, causing him to look at the camera and roll his eyes.

Your daffodils will give you years of pleasure and enjoyment for minimal care and attention. As soon as the flower has died, remove the head to prevent seed growth. Wait six weeks before trimming the stalk and the leaves down to the base to ensure the bulb has obtained sufficient energy for next year's growth. This is usually somewhere around Midsummer's Day and, by this time, the leaves will have completely died back. Some gardeners like to fold over the leaves and tie them in place. This should not be done as, although it may look neater, it reduces the surface area of the leaves exposed to the sun, thus hindering bulb development. You can then dig the bulbs up if you wish and store them until autumn, but if you leave them in situ, they'll flower just the same. It's important to feed daffodil bulbs when flowering is over to build the bulb up for the following year. A liquid feed or quick-acting granular fertiliser is best. When older daffodils start sprouting, dig them up, divide the bulbs and replant.

Continuous as the stars that shine
And twinkle on the Milky Way,
They stretched in never-ending line
Along the margin of a bay:
Ten thousand saw I at a glance,
Tossing their heads in sprightly dance.

There are Daffodil Festivals held all over the world; from Camden in London to Nantucket, Amity and Meriden in the USA. In Pierce County, Washington, the theme for April 2007 was 'Daffodils & all that Jazz'. At Thriplow in Royston, Hertfordshire, they celebrate the glorious daffodil over an entire weekend; the proceeds are distributed by the Daffodil Weekend Trust to a nominated charity (in 2007 it was the East Anglian Air Ambulance.)

There is a Daffodil Day in Australia, too. Daffodil Day is held to raise funds for the Anti-Cancer Council – and more directly to bring about awareness of skin cancer, which is a major killer in Australia. Sometimes people lay daffodils on Remembrance Sunday in honour of the Australian and New Zealand armed forces' war dead.

1Appointed by Queen Victoria in 1843, he is the only British Poet Laureate in history who has failed to write an official poem for the monarch.2Wordsworth said that if he hadn't been a poet he might have been a landscape gardener. His favourite flower was in fact the celandine, not the daffodil!3Narcissus pseudonarcissus is the wild daffodil.4This is also the poisonous substance present in rhubarb leaves.