Rhubarb Content from the guide to life, the universe and everything 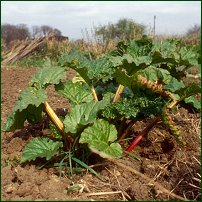 What's long and thin and covered in skin,
Red in parts, stuck in tarts?
Rhubarb!

Rhubarb is an ancient medicinal plant, scientifically a vegetable, although eaten as a fruit (ie, it's sweet, rather than savoury)1. It has only been cultivated as an edible plant since the 19th Century, but it has been used medicinally since 3000 BC in its native China and Tibet, where they used the root as a purgative. It is still used in Chinese medicine today, to cure both constipation and diarrhoea and fevers, among other things. It should only be used on the advice of a qualified practitioner as it is very strong medicine.

The introduction of rhubarb into Europe is often attributed to Marco Polo, who described its pharmaceutical properties at length in his accounts of travels in China. Polo brought the dried root of Rheum palmatum, the medicinal plant, back with him. R.x hybridum, edible garden rhubarb, came to Britain from the Volga region of Russia in 1573, but still not as an edible plant. It too was prized for the therapeutic properties of its root.

The roots of both plants contain tannins with astringent properties, so small doses can be used to treat diarrhoea. The medicinal plant's main benefit was its laxative properties, as it did not give the stomach cramps of other purgatives. This effect is caused by anthraquinones, and needs a larger dose to deal with constipation.

Acute bacillary dysentery has been treated almost exclusively with powdered rhubarb for the past three years...I know of no remedy in medicine which has such a magical effect.
Dr RW Duckett, The Lancet, September 1925.

Baked rhubarb, rhubarb crumble, or other cooked versions will help to keep bowels regular. Add cinnamon or ginger as a warming spice to help with the acidity.

Medicinal rhubarb can also be used in small doses as a tonic to stimulate the appetite and promote digestion and liver function. To get a similar, but much milder, effect from your garden rhubarb, it would need to be four or five years old.

The stalks may also have a mild laxative effect, and some of the tonic effects. They contain plenty of vitamin C and potassium, and small amounts of calcium, as well as Vitamin A. The calcium is of little benefit however, as it also contains oxalic acid, which blocks its absorption.

A small amount of rhubarb (about 15g) and an equal amount of ginger can be simmered slowly in half a litre of water for around 15-20 minutes. Strain, and drink one cupful one to three times daily as a remedy for constipation.

The leaves are poisonous due to their high levels of oxalic acid and should not be eaten.

The oxalic acid means that it should not be eaten by people who suffer from gout, arthritis, kidney and bladder stones. Also anyone at risk from osteoporosis should be aware that it will affect their calcium levels2.

The stalks grow from crowns, starting off deep pink to red and changing to green towards the large, flat leaves. Each plant will last around 15 years if they have a nitrogen-rich soil. If you need to top up your levels, dog waste contains high levels of nitrogen, so can be buried near to the plant in small amounts. In the garden the plant can grow to around one metre tall, depending on how often the gardener loves to eat rhubarb. In the wild the plant rarely grows more than a third of this size.

Rumour has it that the plant does flower during early spring, but generally it is propagated by division. Once the plant gets to five years old it can be lifted during its dormant period over the winter, the crowns separated and replanted. Plants should not be harvested until the second season. If the tall, yellow flower spikes are seen, they should be removed as soon as possible, otherwise the plant will not recover.

The plant can be harvested from April onwards; pull the stems with a twisting motion from the bottom to ensure the entire stalk comes away from the crown. Don't remove all the stalks from each crown – always leave three behind. To harvest earlier, place a bucket filled with straw over the plant for four weeks to 'force' it. The stems will be a much paler pink, will still have that tangy rhubarb taste but will be milder and sweeter, and available for a month earlier. After the first harvest the plant should be left to recover until the next season, so it's a good idea to have more than one plant on the go, some to force and some to leave to ripen naturally. Stop harvesting around mid July to mid August. The taste does change for the worse after this, and it allows the plant to recover ready for the next year. It can also be ignored most of the time, and will still produce a great crop.

Rhubarb can set the teeth on edge unless it is served in a recipe which removes the tartness. Here are some ways of serving rhubarb to make it enjoyable. Some people can eat (and enjoy!) raw rhubarb dipped in sugar or grated onto vanilla ice cream. Others dip it in salt! If the rhubarb is cooked with a few leaves of Sweet Cicely it makes it a whole lot better and gets rid of the 'iron filings' aftertaste. Put it in cups with a stick in it in the freezer, you will end up with some nice 'water' ices for dessert on a hot day.

Recipes for fruit crumble can be found in many cookery books. The rhubarb is stewed with plenty of sugar. One of a variety of crumble toppings can be added before baking. The pudding is served with custard, whipped evaporated milk or possibly cream.

This is an ideal summer pudding, which is quick and easy to make. The rhubarb is stewed with one tablespoon granulated sugar, until it is soft. Then a packet of jelly is broken into the mixture and stirred until it has dissolved. The mixture is poured into a soufflé dish or other suitable container, covered and left until the jelly is set. In hot weather it may need to be put in the fridge. The best flavours of jelly to use are strawberry, raspberry or orange. It can be a bit sloppy if you're using young rhubarb, but it's delicious.

Rhubarb may be stewed in lemonade with about half the usual sugar. This takes away the bitterness but the lemon cuts through the sugariness too.

A variation: chop a couple of freshly pulled and rinsed sticks into one inch pieces. Put pieces in saucepan with a spoonful of brown sugar and a little butter. (No need for extra water, just the remains of the rinsing water will be fine). Cook over a gentle heat until softened, but not mushy. Take off heat and let cool. Stir into yoghurt and serve. Vary it a bit with a little orange juice, honey or chopped preserved ginger. It can also be spread on a base of digestive biscuit crumbs bound together with melted butter.

Rhubarb and custard go well together. Eating it with dairy products means the calcium contained in the milk will bind the oxalic acid into something insoluble, calcium oxalate.

As with crumble this can be made with almost any fruit, though it works best with fruit that isn't too juicy. Make some shortcrust pastry (half the amount of fat to the amount of flour you use). Roll this out into a large, flat roundish shape. Brush the pastry with egg yolk. Chop up the rhubarb and place in a pile on the centre of the pastry. Sprinkle with sugar. Fold the edges of the pastry up over the fruit; it shouldn’t meet in the middle, but form craggy edges round the fruit. Glaze the edges of the pastry with the remainder of the egg, and add more sugar if you wish. Cook in the oven at 180°C, for around half an hour.

Preheat the oven to 190°C. Make some shortcrust pastry using 6oz plain flour and line a nine-inch quiche tin, 1½ inches deep, lightly greased standing on a baking sheet. Prick the base all over with a fork and use some of the egg yolks to paint the base and the sides to provide a seal.

Wash and trim the rhubarb and cut into chunks. Place in a shallow baking dish and sprinkle in the grated orange zest followed by the sugar.

Put the tin on a pre-heated baking sheet on a high shelf in the oven and place the rhubarb on the lowest shelf. Cook the pastry for around 20-25 minutes, and the rhubarb for 25-30 minutes until soft. The meringue requires three large egg whites and 6oz caster sugar.

Squeeze the orange juice into a small saucepan. Use a little of it to mix the cornflour to a smooth paste in a bowl, then bring the rest of it up to simmering point. Pour the hot orange juice on to the cornflour mixture then pour the whole lot back into the saucepan, whisk it over the heat with a small balloon whisk until it becomes very thick indeed, then remove it from the heat.

Make the meringue by putting the egg whites into a large, roomy bowl, and use an electric whisk to beat them to the stage where, when you lift the whisk, little peaks stand up. Then beat the sugar in one tablespoon at a time, whisking well after each addition.

Pour the rhubarb mixture into the pastry shell and then spoon the meringue mixture over, making sure that it covers the edges of the pastry with no gaps.

Place the pie on the centre shelf of the oven and bake for 25 minutes, or until the meringue is golden. Remove from the oven and leave for around two hours before serving.

Stop thinking of it as a dessert (remember, it is a vegetable!) and serve stewed rhubarb as a sauce with meat. You can cut down on a bit of the sugar, and splash in a dash of red wine if you like. Rhubarb is supposed to make a very good wine, and rhubarb and stem ginger preserve is delicious on toast.

Melt butter in pan, add ground coriander seed, cook for a minute. Add rhubarb and cook with a little extra water if needed, until it breaks up completely. Bash it about a bit to make it into a sauce.

The acidity of the rhubarb and the spicy coriander are brilliant with the oiliness of the fish. Serve with grilled mackerel, or other oily fish, and new potatoes.

Or if you can't be bothered or have far too much for your own needs...

The alternative is to give it away as a booby prize to the losers of the local tombola/quiz night/car treasure hunt, and let them decide what to do with it.

1Unlike the tomato, which is scientifically a fruit, but is eaten as a vegetable.2Beetroot and spinach have similar high levels.3Mordants are used to fix dyes to cloth and can be either acid or alkaline; they also help prevent the colour from fading in the light.