The Strawberry Content from the guide to life, the universe and everything 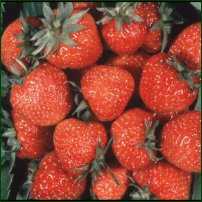 Doubtless God could have made a better berry, but doubtless God never did.
- Dr William Butler, 17th Century English writer, referring to the wild strawberry as being the best of all fruits.

Strawberries are a false fruit1 which are formed from the red, swollen, fleshy base of the flower2, which grow on runners. Over the years they have graced the presence of many events including medieval state celebrations and Wimbledon and more often than not are served with lashings of cream. The strawberry's original name was 'strewn berry' as the fruit appears to be strewn about the plants. The strawberry most people know is Fragaria vesca ananassa, which forms part of the Rosaceae family, and is a subspecies of the European native Fragaria vesca.

Although Europeans knew about strawberries 300 years ago, they did not know about the many varieties which are common nowadays. These new varieties were introduced from North America in the 18th Century. The Europeans were only familiar with the wild strawberries. Wild strawberry fruits are a lot smaller than the American strawberries; in fact they are as small as a bilberry, if not smaller. They can be tricky to find and don't easily grow on runners. This may have prompted our desire to grow the ananassa subspecies, which is more easily cultivated and produces firmer, more succulent-looking fruits.

White-berried varieties are occasionally found, but these are usually bland in flavour.

This Entry will be largely concerned with the cultivated American strawberry, but it is worth bearing in mind that references to strawberries before the 18th Century will relate to the vesca variety.

Anyone lucky enough to taste wild strawberries may be of the belief that the smaller wild strawberry has a superior taste, while being sharper and sweeter at the same time. If grown in warm, sunny places they can become surprisingly juicy, although they are more commonly found in open woodland and scrub near the ground. An afternoon spent searching for these delicacies is often far more fun than the sterile environment of a roadside 'Pick Your Own' centre.

The barren strawberry, Potentilla sterilis, is a cousin of the wild strawberry, but is much rarer and less celebrated, probably due to the fact that it produces a rather dry and bitter fruit.

Unlike other fruit, strawberries carry their seeds on their outer skin, with each strawberry possessing around 20 seeds. These seeds can be used to create lots more strawberries. To grow strawberries it is necessary to obtain well-drained, fresh fertile soil, that has not harboured strawberries for at least four years. This soil should have a pH of 5.5 to 6.5. Surround this soil with straw, compost or other organic material to help retain soil moisture. It's a good idea to keep the area where you plan to grow the strawberries free from weeds so there is no other life competing for the vital sources the strawberries need to grow. For happy strawberries, make sure they receive at least an inch of water, get at least six hours of sunlight and obtain good air circulation. Rotating the strawberries with other crops will help prevent virus diseases affecting them. After three years, the strawberries should be dug up and composted.

When growing strawberries you need to keep a careful eye on them. It is just as easy to get a healthy crop as it is to get a crop which deteriorates.

The first thing to be aware of is that environmental and mechanical factors can affect the strawberry. If these are not causing a problem to the crop then you need to check them over for diseases and pests, which may have caused your crop harm.

Diseases such as red stele root rot, leaf diseases, grey mould, mildew, leaf variegation or June Yellows, Verticillium wilt, and leather rot have all been known to cause problems to the strawberry. Although pests can create just as much harm as diseases.

Though different from the pests listed above, birds also cause problems to the strawberry. Birds such as the blackbird are partial to a strawberry if they can get their talons on them. Therefore, covering the strawberries with netting from the first signs of ripening until the end of July is vital to the strawberry's survival.

Pests and diseases can be eradicated. Pests can be got rid of through the use of pesticides. A disease may mean you should not plant anymore strawberries for up to five years. However, if only one plant or part of a plant has been affected, then it should simply be a case of removing the affected part.

Grasp the stem just above the berry between the forefinger and the thumbnail and pull with a slight twisting motion. With the stem broken about one-half inch from the berry, allow it to roll into the palm of your hand. When you pick your own and store them in containers be careful not to squash them.

Whether you pick your own or prefer to shop around for them, strawberries are only really worth having if they are mould-free, bright red, full and juicy with their fresh green caps on. Strawberries are great for you as they contain Vitamin C; however much of the Vitamin C in a strawberry is destroyed when they are prepared for eating - when the green caps have been removed, if the strawberries have come into contact with extreme heat, or they have been in water too long. They are best eaten as soon as possible.

Ever since the Roman occupation in Europe, strawberries have been believed to have health benefits. The Romans believed that the strawberry alleviated symptoms of melancholy, fainting, all inflammations, fevers, throat infections, kidney stones, halitosis, attacks of gout, and diseases of the blood, liver and spleen. The strawberry has also been used in medicines, for the treatment of discoloured teeth, digestion, and gout and has even been used as an aphrodisiac. More recently it has been thought that the strawberry prevents cancer. Of course whether the strawberry is capable of such things is questionable but it does contain more Vitamin C than an orange and is high in fibre in the form of pectin, which helps to lower cholesterol levels, and (like all fibre) is good for the digestive system. Furthermore, it contains potassium, folic acid, fibre and Vitamin B6.

Strawberries can cause allergies4 and Acute Urticaria, otherwise known as strawberry rash or heat rash, when eaten in extreme heat.

Strawberry birthmarks are red, raised and lumpy markings which can appear anywhere on the body. One in 20 people born are affected by strawberry birthmarks which usually appear on people in the very early stages of their life (between one and four weeks). These markings quickly spread but by the age of five 60% of marks have faded away and at the age of ten 90% have vanished. If they still haven't vanished around the age of ten and they are causing a problem to vision or breathing then they could be lasered or surgically removed. This should only be used as a last resort, due to scarring.

1False fruit may be defined as being thought to be fruit but aren't fruit at all.2Strawberries aren't formed from ovary and seeds. The strawberry 'fruit' has many tiny achenes (small, dry fruits containing one seed) dotted over the fleshy part and so these tiny parts are the real, botanical fruits of the strawberry plant 3Aphids carry two virus diseases: yellow edge and crinkle. Plants suffering from these should be destroyed alongside the aphids.4Strawberries have been known to cause hives.